Leo Cullen and Anthony Foley have both recalled their big names for this weekend's Champions Cup clashes.

Leo Cullen is about to get his first taste of European action as Leinster head coach when his side hosts Wasps on Sunday afternoon at the RDS.

Johnny Sexton is among nine changes to Leinster's starting XV from last week's game against Scarlets, and Sunday's game will be the first time the Dubliner will have played at the RDS since the PRO12 final of 2013 ahead of his departure to Racing Metro.

END_OF_DOCUMENT_TOKEN_TO_BE_REPLACED

The outhalf will play with Noel Reid and Fergus McFadden as his new centre partnership, while Isa Nacewa starts at full-back.

Eoin Reddan starts at scrum-half, while Mike Ross retains his place up front, as Cullen introduces Jack McGrath and Richardt Strauss into the pack.

Mike McCarthy will be the second Leinster player to line out against his former side (as well as Eoin Reddan) as he takes on the second row duties with Devin Toner, while the back row is Jamie Heaslip, Sean O'Brien and Jordi Murphy. 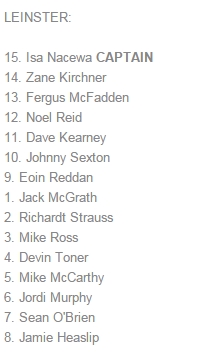 Munster have shuffled their pack for the weekend's encounter with Treviso, with Anthony Foley making five changes to his side from the team that started the win over Edinburgh.

Keith Earls and Simon Zebo are moved to the wing, while Andrew Conway starts the game at full-back.

END_OF_DOCUMENT_TOKEN_TO_BE_REPLACED

The backrow sees Jack O'Donoghue make his European debut at 7, where he'll be guided by Dave O'Callaghan and captain CJ Stander.

Midfield is made up of Denis Hurley and Frances Saili, while Munster fans should be excited to hear that Argentine Lucas Gonzalez Amorosino is on the replacements bench.


popular
"I trained with a guy that was born in 2004 the other day. We reckoned Earlsie could be his father!" - Peter O'Mahony
Nigel Owens on most annoying players to referee (three of them are Irish)
"I remember someone saying, 'This guy's the best of the lot of them. Just wait for him'" - Brian O'Driscoll
What is the story with Tyrone clubs' woeful record in the Ulster championship?
Six All Blacks but no Ireland players in world's top 20 list headed by Antoine Dupont
The story of the GAA's greatest ever minor
"I asked one question and lads slagged the arse off me!" - Johnny Sexton on Roy Keane chat
You may also like
1 week ago
Munster's season thrown into crisis after more Covid positives confirmed
1 week ago
Munster and Cardiff remain in Cape Town as new Covid strain confirmed in Welsh squad
2 weeks ago
"The gap just opened up... I had to take it!" - Craig Casey on making every chance count
3 weeks ago
"I take great solace that others won't know the pain we know" - Axel's life-saving legacy
1 month ago
Joey Carbery put through the wringer before winning it for Munster
1 month ago
"I won't let that happen!" - Peter O'Mahony riled up by Connacht star
Next Page