Kieran Marmion, Devin Toner and Jordi Murphy all set to miss out on World Cup

Ireland do not make their 31-man World Cup squad official until Sunday, September 8 but the entire squad were informed, either by phone or in person, over the weekend.

Joe Schmidt and his coaching staff got together on Sunday, September 1 and they thrashed out the final squad selection calls.

We understand that Schmidt has made a number of bold calls and, in doing so, is leaving three experienced players at home. Devin Toner [67 caps], Kieran Marmion [27] and Jordi Murphy [29] are the big casualties expected when the IRFU release the final squad next Sunday. 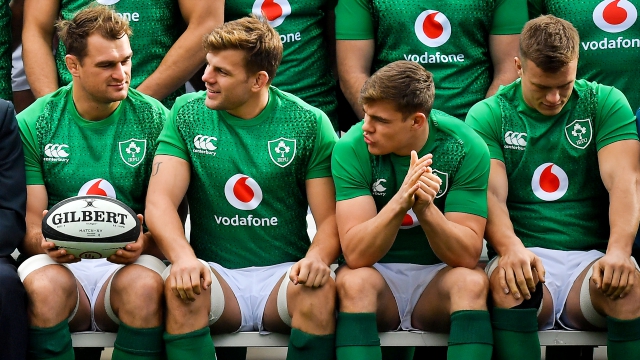 World Rugby had requested that each nation submit a provisional 31-man squad on September 1 but, in case of injuries, all squads will be rubber-stamped next Sunday.

In terms of big calls, this is what SportsJOE is expecting to be confirmed after the final warm-up game against Wales:

These calls, and more, were discussed by Barry Murphy, Andrew Trimble and Jerry Flannery on the latest episode of Baz & Andrew's House of Rugby.

END_OF_DOCUMENT_TOKEN_TO_BE_REPLACED

There was also talk going around, on Sunday and today, of Rob Herring getting in ahead of other hooker Sean Cronin. That one appears to be more on the rumour side of the fence but Cronin will hope to get a chance against Wales, at the Aviva Stadium, to settle any debate.

Schmidt and Ireland would still be permitted squad changes, over the next seven days, should injury befall any of his 31 go-to men in training or in the Wales encounter.


popular
Carragher pushes all the right buttons and Keane delivers in gold
Jermaine Jenas' reaction to Eamon Dunphy punditry is absolutely hilarious
Ireland name team to play England
Conor McGregor's next fight narrowed down to two options
"At the end of it, you're just saying, 'thank God I didn't block that ball down'"
Rovers to continue Direct Provision initiative for 2020 season
The Tony Kelly show in the storm as forgotten man Shanagher shows his worth
You may also like
2 days ago
Andy Farrell names Ireland squad for crucial England game
2 days ago
Ireland expected to make only one change for Triple Crown decider
6 days ago
These three men have proved a point but are far from done
1 week ago
"CJ Stander, for all his praise, could have got carded a lot earlier that that"
1 week ago
Keith Earls and the role that could prolong his Ireland career
1 week ago
"I'm going with my gut here and feel it's the right thing to do" - Andrew Conway
Next Page