Back in 2019, Robbie Henshaw felt the full force of the straight-shooting pundit when, after a disappointing and seemingly sluggish performance in a Six Nations championship loss to England, Williams summed up Henshaw's display by saying that he's "seen milk turn quicker." Right from the hip.

Here we are two years on and while the mood is better after a win over Scotland, the performance was again, nothing to write home about. Having started like scalded cats, Ireland were soon reduced to the slow, scrappy rugby that has been the hallmark of their Six Nations campaign.

Aside from the brilliance of Tadhg Beirne and Will Connors in the pack, the confidence of Hugo Keenan and Johnny Sexton in the backs, it was all too nervous, all too lacking in conviction from Andy Farrell's side.

In Scotland's own errors, we were given a lifeline though and Robbie Henshaw and Tadhg Beirne did well to take their opportunities when they came. Despite holding a 14 point lead at one stage, Ireland never looked to be fully in control however and some, if not all of this fragility has to be attributed to James Lowe's loose defensive cover.

While Garry Ringrose was the main culprit for Finn Russell's opening try, the winger didn't cover himself in glory with his lackadaisical efforts to close down the Scotland fly half. True, it's a game of fine margins and Lowe could say he was biding his time before an unlucky break, but such unlucky breaks are happening all too often under his watch to be considered a coincidence. This comes on the back of missed tackles leading to tries against both Wales and France in this campaign to date.

In the second half, things got worse for the 28-year-old with Hugh Jones beating him all too easily to get in for Scotland's second try. Rather than taking him down, Lowe's effort was brushed aside by the steaming Scotsman who brought Gregor Townsend's side back into the game.

It was clear a couple of minutes later, when uncontested and in possession, Lowe just threw the ball forward and out of play, that it just wasn't his day.

"It's James Lowe. He just sails past him."

"He misses that tackle, he's got to make it." 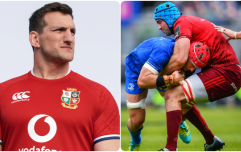 END_OF_DOCUMENT_TOKEN_TO_BE_REPLACED

Speaking on Virgin Media after the game, the Australian pundit didn't write off Lowe's international career but he didn't spare him either, claiming that his defence is not "at the level required for international rugby."

"I hate to pick on James Lowe because he's a lovely guy but that is just not acceptable at international level," said Williams.

"You just can't reach out like that at shoulder level (with a tackle.) I don't want to kick James, but I don't think think he's at the level required in defence in international rugby and he's being caught out. I think he has a lot of quality and I'm not saying he's not up to it, or written off, I just think he has a lot of learning to do as regards the intensity required for defence," added the pundit.

"Here it's a 50:50 balance between defence and attack, in Super rugby it's 80:20. I think he gets very, very excited when his team has the ball. The difference between playing at test level to playing in the Pro 14 is chalk and cheese and it can be hard to get up to that level," added the Cork-man.

Ireland manager Andy Farrell meanwhile, agreed that Lowe has lessons to learn at the top level.

"We'll sit down with James. There's obviously others we need to sit down, with him, and teach them what international football is all about."


popular
We knew Sean O'Brien wouldn't let us down with his Lions XV
Bill Shankly’s grandson asks for statue to be removed from Anfield
Sam Warburton backs Beirne and "phenomenal" van der Flier for Lions squad
'War-scene' in Tyrone dressing room before 2005 final sums up an iconic team
Keith Earls backed for Lions XV by one of the best in the game
'Make him hurt, make him yours' - How the Springboks ruled the world
The SportsJOE 12 o'clock quiz | Day 335