"Jeez, they opened them like a tin can, didn't they?!"

It is no big surprise to see Josh van der Flier heaving into counter-rucks, but he didn't have to go it alone against Scarlets. Jordan Larmour was on the scene and he packed more of a punch than most would have expected.

In flew the Leinster winger, getting low and driving his legs forward. Between the Leinster lads, they made mince-meat out of three Scarlets players and secured a turnover.

END_OF_DOCUMENT_TOKEN_TO_BE_REPLACED

If you watched Larmour closely in his first games back, against Zebre and Scarlets, you'll notice how he has added some more timber to his frame. The winger is 24 now and has filled out a bit more. He has looked more physical in those two games, too. For his try against Zebre, he rode one tackle and took a couple of Italians over the tryline with him.

Jordan Larmour has been very impressive in his two outings for Leinster this season pic.twitter.com/xGNNAchmyg

With Hugo Keenan now looking like one of the first names on Andy Farrell's November internationals team-sheet(s), Larmour is heading back to a position that suits him best - the wing.

On the latest House of Rugby URC [LISTEN from 27:00 below], the gang discussed Larmour's excellent form and that over several other Leinster stars as we head into the final round of United Rugby Championship games before the Test window. 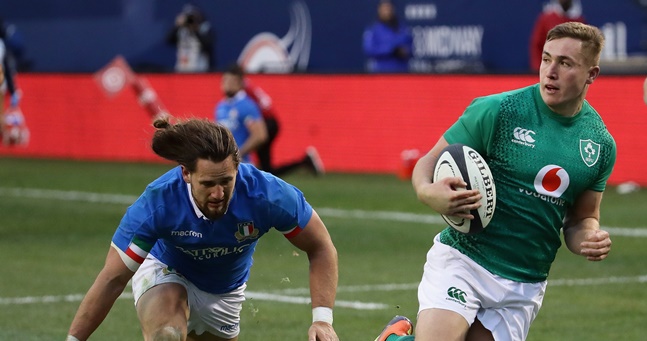 Jordan Larmour scored a hat-trick from fullback on his first start for Ireland, in 2018 (Photo by Jonathan Daniel/Getty Images)

END_OF_DOCUMENT_TOKEN_TO_BE_REPLACED

When Warren Gatland announced his British & Irish Lions squad to tour South Africa, earlier this year, there were no Ireland wingers included. No-one was arguing that much about it.

As Ireland went from a 'Team of the Year' 2018 into a big World Cup year, you would have bet heavily on Jacob Stockdale and Jordan Larmour making a 2021 Lions squad. Instead, when Gatland made his picks known, the biggest Ireland gripe, when it came to back three selections, were about Keith Earls and Hugo Keenan not making the cut.

So, where did it go wrong for Stockdale and Larmour? Both lads had electric starts to their Test careers and were key parts of an outstanding 2018. Part of that answer is that both players were analysed to death and neutralised by opposition coaches and players. Another part was trying to get them to replace Rob Kearney.

Kearney, as we saw in 2020 and early in 2021, was badly missed by Ireland as he was so adept at covering the back field on his own and allowing 14 of his teammates to press up with their defensive line. While Larmour and Stockdale were both more of an attacking threat, neither were a patch on Kearney when it came to putting out fires.

Farrell started the 2020 Six Nations with Larmour in the No.15 jersey. He was the heir apparent, but he never convinced in the role. There was a nice try against Wales but he had a rough outing - like many others - at Twickenham in a 24-12 loss to England.

A shoulder injury ruled Larmour out of the remainder of that championship and the Autumn Nations Cup. Farrell turned to Stockdale but that move backfired and damaged the Ulster star's already fragile confidence. Keenan took over from Stockdale and has locked down his spot in the starting XV [he has started the last seven games at fullback].

The experimentations would remind you of Jürgen Klopp's exasperated take on Gareth Southgate trying to change Trent Alexander-Arnold into a centre midfielder:

"I am a manager myself. We always make decisions that other people probably do not understand. I respect Gareth makes his own decisions, of course, but I didn’t understand it because Trent Alexander-Arnold was in the last two seasons at least the standout right-back in world football."

Larmour and Stockdale have both looked their best on the wing, and sense seems to be prevailing where both men are concerned.

Earls is still on the scene, and making a weekly impact, and we also have the likes of James Lowe and Robert Baloucoune on the scene. A back three of Stockdale-Keenan-Larmour has a lot going for it, though.

Having both looked ready to keep the flame going, after setting the world alight in 2017 and 2018, Larmour and Stockdale came back to earth over the past couple of years.

You could argue that Stockdale is not yet fully back to his best [he still has three tries in his last six Ireland games, and 19 overall] but this is the season for him and Larmour to make good on that potential, and obvious talent.


popular
Kieran McGeeney on the defensive after post-match questions on brawl
Damien Comer targeted in brutal, chaotic Armagh and Galway brawl
Conor Gleeson's gesture to heartbroken Ethan Rafferty a tonic after sideline brawl
Shane McGuigan does a 'Sueey' Cristiano Ronaldo would be proud of after winning MOTM
Roy Keane makes good on bet after seeing Cork fall to Dublin
"That bit of a fracas nearly woke us back up again" - McDaid never doubted his boys in the shoot-out
QUIZ: Name every club to play in the Champions League
You may also like
5 days ago
"Brave" Harry Byrne backed to lay down World Cup marker in New Zealand
1 week ago
"Hopefully we'll come away with a gem" - Joe McCarthy potential sealed Ireland selection
1 week ago
Andy Farrell had an interesting take on Irish provinces being outmuscled in big games
1 week ago
Nathan Collins stuns Ukraine with goal sweeter than Michael Obafemi's
1 week ago
"I got sent the clip!" - Mack Hansen wasn't letting Greg O'Shea forget his Ireland comments
1 week ago
Ireland team Andy Farrell should start in First Test against the All Blacks
Next Page