Jerry Sexton will join the South African side on a three-season deal after impressing during his two-year spell with the Jersey Reds in the Greene King IPA Championship.

The 26-year-old, who was part of the Ireland Under-20 side that played in the World Rugby Under-20 Championship in 2013, plays as a lock and represents an exciting acquisition for the Kings.

Currently the captain of the Jersey Reds, Sexton has previously been on the books of London Irish, Exeter Chiefs and Auch Gers.

The switch means that the Sexton brothers could well line out against one another in the PRO14 next season, when Leinster and the Kings clash. 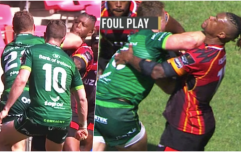 Connacht's Peter Robb red-carded after first touch of the ball

END_OF_DOCUMENT_TOKEN_TO_BE_REPLACED

"This is an exciting period in my career," Sexton told the Kings' official website.

"I have been following the Isuzu Southern Kings, particularly in the Guinness PRO14, and I am looking forward to be part of the team, the culture and the exciting new era that lies ahead for the franchise.

"I am grateful for the years spent at Jersey Reds and the role the club played in the growth of my career. I look forward to further growth and making a positive contribution at the Isuzu Southern Kings."


popular
In 86 seconds, Patrick Bamford becomes English football's voice of reason
Springboks legend Tendai Mtawawira tells us what he really thinks of Ellis Genge
'Make him hurt, make him yours' - How the Springboks ruled the world
'Beast' Mtawawira is a big fan of Mike Ross' Lions front row
Jose Mourinho is about to step up and become the hero football needs
"We did find him hours later and we made up." - How Flynn and his best friend came to blows in Croke Park
Jose Mourinho is the picture of happiness and health after Spurs sacking
You may also like
1 year ago
Pro14 Preview: Munster v Southern Kings
2 years ago
Marcell Coetzee shows everyone what he's capable of with spectacular performance
3 years ago
Two Munster backs ruled out of Southern Kings game
3 years ago
EXCLUSIVE: New PRO14 teams to be boosted with at least five Test stars each
1 week ago
Van der Flier and Kelleher make Lions statements at Sandy Park
1 week ago
Robbie Henshaw gives copy-book response when asked about Lions Tour
Next Page