Not a Kleberson or Falcao in sight.

Johnny Sexton is hoping to play his first World Cup warm-up, against Wales, this weekend but he has other thinks on his mind.

Sexton has Luca, his baby son, to keep him busy on down days but another, less enjoyable preoccupation is Manchester United. 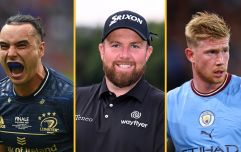 Your guide to an unmissable weekend of sport, and how to stream it all

END_OF_DOCUMENT_TOKEN_TO_BE_REPLACED

Sure, United may be unbeaten after four games but they have missed out on a host of top transfer targets and are struggling to find the net in the league.

In an interview with Rugby World magazine, Sexton talks World cup, his partnership with Conor Murray and Ireland's use of the high ball.

He says, 'We have guys that are good in the air, so we try to exploit that at times.

'There are a lot of Gaelic footballers in the squad, so they are used to getting the ball above their head.'

Sexton also lists his favourite United players of all time.

Roy Keane: 'One of Ireland's best ever footballers.'

Ryan Giggs: 'He played until he was 40 without his standards dropping.'

Eric Cantona: 'I just used to love watching him play.'