"When I hang up the boots I’ll be like a lost puppy for the first while."

We can shelve all the Tom Brady talk [unless he rocks up in Major League Rugby like Mathieu Bastareaud or Matt Giteau]. Johnny Sexton has told us all that the 2023 World Cup will be his last dance.

Shortly before he was due up for the Ireland captain's press conference, in this Six Nations week, word came through on social media that Sexton hads penned a new deal. The 36-year-old has signed on with Leinster and Ireland until the end of October, 2023.

In other words, he will play on as long as Ireland stay on at the 2023 World Cup. After that, the boots will be hung up on what would be a 17-season professional rugby career. He commented:

"It was always my intention to try and stay at the top of my game to get myself to a World Cup and I’m very thankful and grateful that I’ve been afforded that opportunity to do it. Now it’s up to me to keep the body in good shape.

"I’m still very driven to get there and perform at the World Cup. That was one of the biggest factors for me. I spoke to a lot of guys who have finished in the game with big regrets over World Cup and I have a chance now to do that. It’s obviously a long time away and at this moment we’ve got a lot in front of us to focus on but it’s great to get it sorted."

END_OF_DOCUMENT_TOKEN_TO_BE_REPLACED

Sexton name-checked a raft of legends that went on into their mid- to late 30s at the highest level, including former Ireland captains for Rory Best, Paul O’Connell and Brian O’Driscoll, as well as Munster legends Peter Stringer, Donnacha O’Callaghan. Seeing how Brad Thorn and Richie McCaw could still mix it with the best, as the miles racked up, was another inspiration. 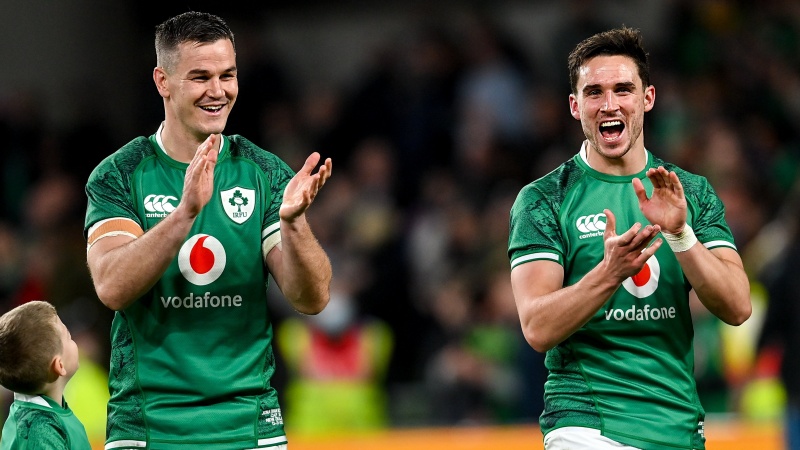 Jonathan Sexton, left, and Joey Carbery of Ireland after their side's victory over New Zealand in 2021. (Photo by Ramsey Cardy/Sportsfile)

END_OF_DOCUMENT_TOKEN_TO_BE_REPLACED

Away from the matter of the preparations and chat around a big England vs. Ireland game - he says it is "irrelevant" that Eddie Jones says the Irish are favourites - Johnny Sexton was in reflective mode about his time in the green jersey.

He had to duel with Felipe Contepomi at Leinster for three seasons, as a young player, so by the time he finally got to the international stage, he was primed and ready for another tussle with Ronan O'Gara. Next year's World Cup will be his fourth, and he would love nothing more than to get his country past the quarter finals, and beyond that again.

"I've been beating around the bush for six months, always nervous talking about the World Cup when you weren’t guaranteed to be there, but I just want to make the most of this last 18 months of my career, and go out on the top.

"It’s up to me now to work hard and get the body and mind in the best shape possible, and attack the last 18 months."

END_OF_DOCUMENT_TOKEN_TO_BE_REPLACED

Asked what food or drinks he was most looking forward to getting stuck into, after retirement, Johnny Sexton mused, "It’s balance.

"You still find time in your routine to have the odd beer with your brother or friends or teammates, or a glass of wine, you can still do that as a professional rugby player, you can just do it a little bit more often - which is the dangerous thing - when you retire.

"I’d say when I do retire, I’ll miss everything about the game. It’s an absolute dream to do what I’ve done and to do it for so long is incredible. I pinch myself every day. I’m just very grateful to keep it going.

"When I hang up the boots I’ll be like a lost puppy for the first while, but I’ll find something else to throw myself into, golf maybe?"

Knowing how competitive a guy he is, Sexton will be pinging the likes of O'Driscoll and O'Connell at 6am on the first Monday of his retirement to set up a high-stakes game down at the local course.


popular
World Cup 2022 Day Ten: All the major action and talking points
Iran demand action by FIFA after USA team change flag on social media
"I have equal love for football and hurling" - Sheehy set for two Leinster finals in two hours
World Cup 2022 Day Nine: All the major action and talking points
"I appreciate Moycullen now more than ever" - Cooke's American lifestyle from a Moycullen base
Canelo Alvarez duped by fake Lionel Messi Instagram post
For Ballyea, this journey all started out in a purple Toyota Corolla
You may also like
3 days ago
Former England international admits he wishes he had played for Ireland
1 week ago
Two baffling omissions as four Ireland stars make World Rugby 'Dream Team' of the Year
1 week ago
Josh van der Flier claims World Rugby Player of the Year at Monaco ceremony
1 week ago
"Highlight of my Ireland career" - Behind the scenes as Jack Crowley and Ross Byrne covered for a legend
1 week ago
Bundee Aki reminded us all of his best qualities, on a night Ireland couldn't do without him
1 week ago
Peter O'Mahony delivered some fitting Jack Crowley comments after surprise Test start
Next Page