Munster exposed Johnny Sexton for what he is - Ireland's greatest competitor

A crescendo of boos and abuse rang down as Johnny Sexton and referee Frank Murphy exchanged words again.

It had been six and a half years since Sexton had lined out against Munster at Thomond Park and the home fans were both baying and braying. Ireland's No.10 had been rattled early and had been fortunate Murphy took a light view of his using Fineen Wycherley's head-gear as an instrument of flaying retribution:

Both men had landed their blows but it was Wycherley that emerged from the match with the plaudits. The young Bantry native had laid down a marker on the Leinster talisman.

One could say that Sexton was rattled but you'd forget that he lives for this sort of needle. Plenty of out-halves do not, but Sexton revels in white-hot games.

To him, and players on both sides, that confrontation with Wycherley was the signal for all-out war. Minutes after, Luke McGrath was pancaked by CJ Stander after the Leinster scrum-half got a pass away following a lineout. Kleyn then dropped Sexton on his rear, Scott Fardy cleaved into Chris Cloete and Jordan Larmour was coming in for close attention.

James Lowe, Conor Murray, Larmour and Andrew Conway all got into it on, and beyond, the touchline and we had the sight of Sexton yoinking Joey Carbery to the deck and Kleyn giving Lowe an almighty shove.

Of course the Munster fans howled - that is their right, and duty, as home fans - but most neutrals were loving the return of some genuine bite to the contest.

On Baz & Andrew's House of Rugby [from 12:00 below], former Munster centre Barry Murphy says Sexton was 100% going after Carbery in that sideline flashpoint. 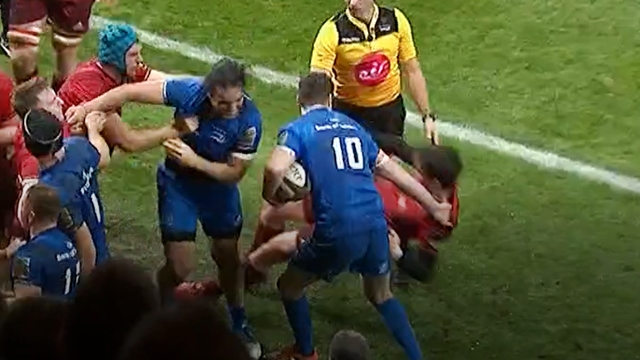 "To me," said Andrew Trimble, "everybody was tugging and pulling at each other and, it just so happens, that Carbery lost his balance... he was an awful position just as Johnny [pulled him].

"There's no way Johnny would have said, 'There's Carbery... there's the new ROG!' He just thought, 'There's a Munster player' and grabbed him." Murphy disagreed with the former Ulster and Ireland star:

"I think he did [know it was him]... Carbery used to play for Leinster and there's definitely that bit of niggle there. I hope there is anyway."

There was also the moment when Sexton and Carbery appeared to have a coming together at a ruck, in the first half. TV pictures were unclear but, as Sexton rose to get back into playing position, he appeared to lean on the Munster outhalf, who yelped out in pain.

Some fans were claiming there was a knee dropped while others felt there may have been a stamp. The incident happened right under the nose of Murphy and one of his sideline officials and Sexton was not cited for it, so we can simply call it an on-field collision and move on. These things do happen all the time, and even more so when there is some niggle in games.

Trimble and Murphy both feel Sexton is the perfect man to captain Leinster for the rest of the season and beyond, despite some claiming the 33-year-old lost his cool and saw his team suffer as a consequence.

There is an argument that Sexton should focus on being the attacking talisman for Leinster, and a senior voice on the pitch, but letting a more diplomatic player, such as Rhys Ruddock, be captain.

"There was another criticism of Johnny [on the night] that he was moaning and complaining," said Trimble, "but it was actually Frank Murphy going to him to have the discussion with him, quite a few times... a couple of Johnny's arguments were quite rational and well thought out."

"I think it is very over-reactionary to question if Johnny is the right man to lead Leinster," Trimble added. "Has this ever been mentioned once, up until last weekend? Has there ever been a suggestion that maybe Johnny is not right to captain Leinster?

"Everybody has been overwhelmingly supportive of him being Leinster captain up until one weekend whenever Leinster lose, and then that is the conclusion everyone is jumping to. It's not really fair."

There is no doubt that Sexton was sucked into some of the needle and score-settling in the opening 30 minutes of a fractious game. What seems to have been lost, though, is how Sexton was one of the key players to get Leinster back to just 16-10 behind, and with Munster under pressure, with 20 minutes to go.

Had he stayed out on the field, rather than being replaced by Ciaran Frawley for the last 20, Leinster may well have salvaged something from the game.

What Munster climbing into Sexton and Leinster showed is something Irish rugby fans should already know anyway - Sexton is not always perfect but he is always a wildly fierce competitor.

If you welcome it when he is in green, it is hard to come down too hard when he replicates his passion and prickliness in blue.