The last time we saw Johnny Sexton on a rugby pitch it was a disaster.

He was at the epicentre of Ireland's metldown in Cardiff and nothing he was doing was working for him or his team. He kicked up and unders out on the full. He passed into touch. He had problems with his restarts and kicked balls dead.

He looked so far removed from a player that was crowned the best in the world the previous year that you began to wonder how long this rut was going to last for. How did one of the best halfback partnerships in the world descend into a dysfunctional mess.

The loss to Wales in Cardiff was a sobering defeat for many members of that Irish squad as they were quickly brought back down to earth after scaling such dizzying heights during Irish Rugby's year of years.

The loss would have hurt a lot of players but maybe none more so than Sexton who prides himself on preparation and detail. In many ways Sexton and Ireland head coach are kindred spirits in that nothing gets left to chance.

Rugby players would put an insomniac to sleep when you begin to let them rattle on about concepts like detail, processes, controllables etc., but when you watched Leinster topple Toulouse on Sunday it was such a clinical and ruthless performance.

They were a well-oiled machine and they dominated the three areas that most winning teams thrive in; possession, territory and turnovers conceded.

If they looked well drilled and organised it was most likely because they were, and according to head coach Leo Cullen, Sexton is a big driver in ensuring that his teammates are up to speed on what they are trying to do on the pitch.

"It's great to have Johnny back in the team, we haven't had him since the end of December," said Cullen.

"Behind the scenes Johnny is always working hard to drive standards in the group and that's an amazing quality that he has; there's never an end point to it.

"Even if there's things we think we can do well, he'll find other things we can get better at. That's what we need as a group.

"We know we have to be very, very good because at this stage of the competition all the teams are heavily loaded, heavily resourced and everyone is gearing up to trying to win on the big days, to play well on the big days.

"The standard Johnny sets for himself is exceptional and I think it rubs off on everyone else."

Sexton's performance on Sunday wasn't exactly 2011 'I'm going to take over or we're goosed here' Heineken Cup final level but he effectively pulled the strings and it's the timing of his passes that really sets him apart from most other fly-halves. 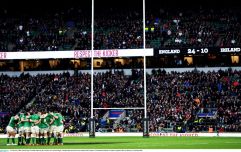 END_OF_DOCUMENT_TOKEN_TO_BE_REPLACED

There might be some questions marks on this delivery over whether that ball is flat or forward but it's the right option regardless and it's the one line here that sees Leinster turn what should be a tackle at the gain line into a 10 metre run.

Leinster get quick ball, reload and on the very next phase Sexton hits Jack Conan for another gain and all of a sudden the hosts are driving their way forward towards the 22.

Conan eventually offloads the ball to Luke McGrath after he's hauled down by François Cros but you can notice Sexton immediately accelerate and look for the return ball in a great show of support play.

The next phase after Conan's carry, Leinster are awarded a penalty for not releasing the ball carrier and Sexton converts to put the defending champions 15 points clear and effectively finish the game off as a contest.

Earlier in the half we can again see Sexton's influence on Leinster's attack. The Blues don't do anything spectacular here but the alignment is perfect on both phases, and although they really only make about 12 metres from the scrum, they're stretching Toulouse constantly and because of this we begin to see the type of holes develop that were earlier demonstrated where players start to make incorrect reads and mistakes.

The problem for Leinster is that they're facing a Saracens team in the final that mirrors them in a lot of ways. Saracens have a pack with five Lions players, a world-class fly-half, a strong centre pairing and quick outside backs that can finish.

Although they were decimated in Dublin last year, it's hard to see the same sort of game developing given just how much they ran up the scoreboard against both Munster and Glasgow in the previous rounds.

The final should be a cracker if both teams show up as these really are the two best teams in Europe and arguably they have been the two finest clubs of the last decade. No better finale.


popular
ROG hits the nail on the head assessing Ireland's performance
The Ireland XV that should definitely start against Italy
Triple Crown wrenched away as England scrape Ireland off their boots
QUIZ: How well can you remember this season's Premier League results so far?
Player ratings on a dismal day for Ireland in Twickenham
Tyson Fury reveals what happened when he sparred Anthony Joshua
"Next thing, all I see is this 'BANG' coming in over me... It was O'Driscoll"
You may also like
2 weeks ago
Johnny Sexton says "outstanding" Conor Murray's box-kicks won Ireland the game
2 weeks ago
Romain Poite "brilliant to deal with" - Sexton
2 weeks ago
Johnny Sexton on what was said at Ireland's Friday night meeting
1 month ago
Only three Irish inclusions in 'world class' 31
1 month ago
Johnny Sexton set for Ireland captaincy despite injury lay-off
2 months ago
'With Johnny, you need to take this seriously and the IRFU need to front up'
Next Page