That's settled then, Johnny Sexton is our 2023 World Cup outhalf

Not long after he had led Ireland to victory over New Zealand - the fourth time he has beaten the Kiwis in his career - Johnny Sexton set a bold agenda that went all the way up to, and included, a shot at the 2023 World Cup.

Sexton captained Ireland to a 29-20 victory over the All Blacks and was effusive in his post-match praise of Joey Carbery, who replaced him for the final quarter.

"Special word for Joey. After being out for so long, to see him come on and kick three goals. I was chuffed for him.”

END_OF_DOCUMENT_TOKEN_TO_BE_REPLACED

Sexton and Tadhg Furlong extended their winning record against New Zealand to four [three with Ireland and one with the British & Irish Lions in a drawn Test Series]. Having waited over a century to beat the mighty All Blacks, it is becoming welcomingly familiar, of late.

This was the best Ireland game of the 18 overseen by head coach Andy Farrell, since he took over from Joe Schmidt. It took a while for his bolder, attacking game-plan to click but we are really seeing the results now.

END_OF_DOCUMENT_TOKEN_TO_BE_REPLACED

Peter O'Mahony's early red card against Wales and a strangely flat [Johnny Sexton-less] defeat to France scuppered our 2021 Six Nations hopes, but Farrell's side look well set to give both England and France a good rattle in next year's championship.

2022 will be as tough as it comes, and will be a true test of where this side are. Not only do they have France and England away, they fly to New Zealand in the summer to take on an All Blacks side - with plenty to prove - on their own turf. Ireland were cruelly denied victory in Christchurch, back in 2012, but were pumped in their other two tour games.

If they can come out of those five massive away games with three victories, however they fall, you will find Ireland tossed back into the chat as potential World Cup winners. 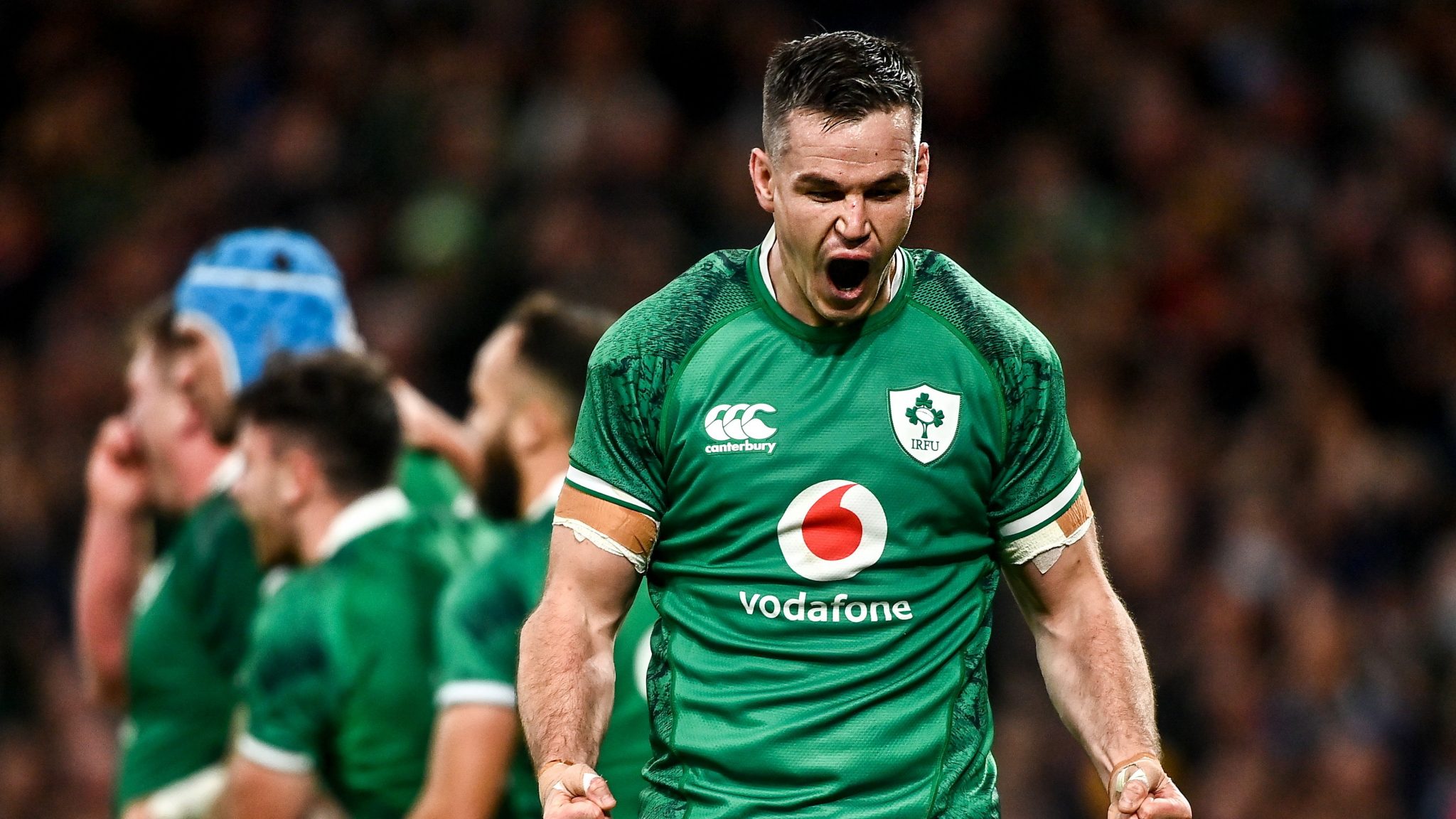 Farrell and Sexton experienced it in 2019 too, after winning Team of the Year in 2018. Sagely, Sexton commented:

"This is just the start and we need to keep building. The thing about beating New Zealand - it gives a lift to the country but you don't get a trophy."

Looking at the team as a whole, and with the World Cup in mind, they are putting some nice pieces together

We also saw Jamison Gibson-Park play his best game, to date, in a green jersey. Many have pressed his case for the past couple of years, but Saturday against the All Blacks was his gold-embossed calling card - THIS IS WHAT I'M CAPABLE OF

We have Craig Casey waiting in the wings while Conor Murray is fresh off his third Lions Tour and still an excellent player. It goes to show how stacked Ireland are here when Kieran Marmion and Luke McGrath - the scrum-halves involved when we beat New Zealand in 2018 - can't get a look-in, despite club form. You also have Nathan Doak and the out-of-favour but special John Cooney at Ulster.

What Saturday settled, though, is that Johnny Sexton is our 2023 World Cup outhalf.

Sexton will be 38-years-old [and a couple of spare months] when that tournament kicks off in France. It is going to be one hell of a gamble, but he is going to be our starting 10 if we can manage the situation, and the man, in the right way.

The naysayers will say going into a likely World Cup quarter final against either New Zealand or South Africa [our likeliest opponents, barring shocks] with a ageing, knocked about outhalf is madness. They are not entirely wrong.

That being said, this Ireland team look so much better, and more assured, when Sexton is out on the pitch. Against New Zealand, Japan, England, Italy and Scotland [all this year], Ireland have played a higher line, made brave calls, ran great lines and kept up an impressive pace.

On Saturday, Gibson-Park and Sexton were the driving force of the Irish attack. They went after the Kiwis and beat them at their own game - playing with a real pace and purpose and not letting the other side pause to catch a breath. The only flaws on Sexton's performance were the conversion he missed after Ronán Kelleher's try and carping at referee Luke Pearce a bit too much [something he later said he is still trying to work on]. 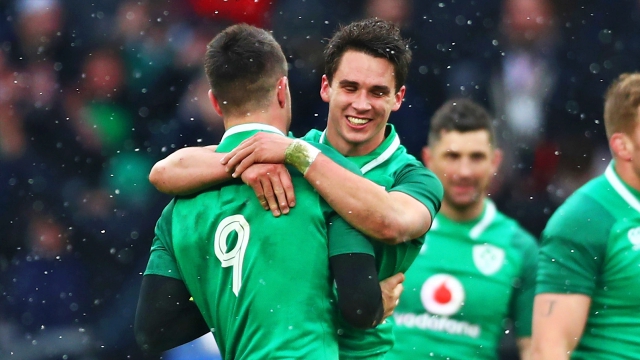 What Ireland need next, then, is for not just one but two out-halves to really press for starts. Joe Schmidt put his chips behind Carbery, heading into the 2019 World Cup, only for the Munster man to break down [he travelled to Japan but was nowhere near fit].

For Farrell, the plan right now involves Carbery backing up Sexton and possibly getting the odd start. Himself and Murray will be pushing to start against Argentina, and prove they can play at this quicker tempo.

And then? Hopes are high that Harry Byrne will be the guy that has the talents and ego to give Sexton a proper run for his money.

Ronan O'Gara, speaking earlier this week, said Byrne's big challenge was to get consistent starts in the 10 jersey for Leinster. He has a point, but people high up in the Irish set-up see that same potential that many did in him when he was coming up. O'Gara was further along, at 22, than Byrne is now but a pandemic-affected 2020 did not help his cause.

Right now, this is the pecking order:

Injury or the undeniable form of Carbery or Harry Byrne are the only way Sexton will be bumped from his throne. Jack Crowley is fancied by many, down at Munster, as a future Test 10.

We all may look back on another World Cup quarter final, in two years' time, and ask, 'What were we THINKING?!' How did we fall into the same trap?

There is something about this team with Johnny Sexton at the helm - the world-class veteran leading a hungry and talented bunch from a new generation - that is as enticing as it is crazy. And we've had plenty of World Cup heartaches and early exits before.

Let's see where this takes us. We're not fully sure it is the way to go, but the evidence in Sexton's favour is hefty [they shredded England and New Zealand with Sexton in his pomp].

Right now, Ireland are at their best with a 36-year-old outhalf that people keep waiting on to leave the stage without a fuss.


popular
World Cup 2022 Day 10: All the major action and talking points
"I can absolutely say that I have never enjoyed a job more" - McKaigue revelling in new role as Slaughtneil GPO
Iran demand action by FIFA after USA team change flag on social media
"I have equal love for football and hurling" - Sheehy set for two Leinster finals in two hours
World Cup protester releases defiant statement after pitch invasion
World Cup 2022 Day Nine: All the major action and talking points
"I appreciate Moycullen now more than ever" - Cooke's American lifestyle from a Moycullen base
You may also like
3 days ago
Former England international admits he wishes he had played for Ireland
1 week ago
Two baffling omissions as four Ireland stars make World Rugby 'Dream Team' of the Year
1 week ago
Josh van der Flier claims World Rugby Player of the Year at Monaco ceremony
1 week ago
"Highlight of my Ireland career" - Behind the scenes as Jack Crowley and Ross Byrne covered for a legend
1 week ago
Bundee Aki reminded us all of his best qualities, on a night Ireland couldn't do without him
1 week ago
Peter O'Mahony delivered some fitting Jack Crowley comments after surprise Test start
Next Page