One of the most relieved men, upon hearing the final whistle, at the Aviva Stadium on Saturday will be Johnny Sexton. The Racing Métro out-half has not played for club or country since November 22 but is named to start against France.

Racing's initial reasoning for Sexton missing Top 14 duty was "workload" but that all changed, in late December, when a Parisian neurologist gave his recommendations to pull the Irishman from the line of fire.

END_OF_DOCUMENT_TOKEN_TO_BE_REPLACED

The concussion Sexton suffered during the win against Australia was his fourth in eight months. Two of the other concussive blows arrived when he was playing for Ireland - France [March] and Argentina [June].

Ligue Nationale de Rugby protocols on concussion state that after suffering four instances of concussion in a year, a player must observe an obligatory stand-down period of 12 weeks. Sexton was allowed to train and keep up his fitness levels but no contact was allowed until Monday of this week.

The LNR protocols state that inactive period should be doubled, at least, if any additional concussions are picked up. That ruling comes with the stipulation of further testing and medical advice as a longer rest period may be recommended.

The first of Sexton's concussions arrived on 15 March, 2014, on the evening Ireland won the Six Nations. The out-half was sent flying by 120kg France centre Mathieu Bastareaud, who's forearm collided with his jaw. 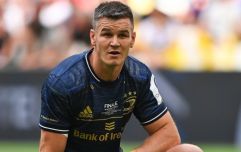 END_OF_DOCUMENT_TOKEN_TO_BE_REPLACED

Ireland play three games - France, England and Wales - before the 12-month period of that concussion elapses. Should Sexton receive any head injuries in that period, it stands that he would be ruled out, by his employers, Racing Métro, for up to 24 weeks [just under six months].

Ireland's first game at the World Cup is September 19 this year. 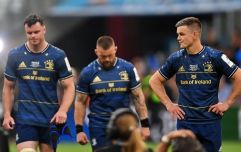 Another gold star opportunity ripped out of Leinster's hands

END_OF_DOCUMENT_TOKEN_TO_BE_REPLACED

The situation could get murky as Sexton's contract ends in June and he will rejoin Leinster, with the IRFU his paymasters. Both province and union would expect to have a say in future determinations about their player.

While Sexton, who wishes to play on until he is at least 36, will be hoping to never suffer another concussion in his career, the odds against that happening appear long.

Much was made of France coach Philippe Saint-André's comments, on Wednesday, that his side would look to 'test' Sexton early on. France should be expected to give the Irish out-half a torrid evening and to not let up for a moment.

That does not mean, in any way, shape or form, that the French players will be head-hunting Sexton. On Friday afternoon, Paul O'Connell said, 'I played in a team with Ronan O'Gara for many years where teams knew how important he was to us and always attacked the 10 channel.

'It’s every team’s focus to attack the 10 channel, it’s where a team’s playmaker is and it’s part and parcel of the game. France can attack us anywhere and attacking the 10 channel is nothing new.'

The hope of every Irish supporter, at the end of the Six Nations, will be to talk about Sexton the player rather than Sexton the injury concern. Still, given the heavy-duty hits he has endured in the past year, it is a worry that will never truly pass.


popular
QUIZ: How many of the 10 most successful football counties can you name without making a mistake?
Conor McGregor and Floyd Mayweather 'in talks' about a rematch
Éamonn Fitzmaurice explains Aidan O'Shea's best position and how it can be used against Kerry
Matt Le Tissier says he asked Sky Sports why they never sacked Jamie Carragher
Patrick Vieira claims he was 'much better' than Roy Keane in new interview
Steve McClaren issues warning to Man United players
You'll have to be red-hot to get 20/20 in this 2010s footballers quiz
You may also like
3 weeks ago
"We came within 60 seconds of it" - Johnny Sexton on Leinster devastation
3 weeks ago
"He's become a threat again" - Ronan O'Gara on Johnny Sexton's third coming
1 month ago
Somehow, we all may have underestimated Johnny Sexton
1 month ago
"Johnny Sexton has achieved pretty much everything... he's someone I fully respect"
2 months ago
Johnny Sexton responds to thumping Bundee Aki tackle with sublime try assist
3 months ago
Four Irish stars make Will Greenwood's Six Nations 'Team of the Week'
Next Page