The Leinster tighthead spent 73 minutes at the coal-face - taking on Cyril Baille and then a fresh Jean-Baptiste Gros - and lived to tell the tales. It was a gruelling encounter for all that laced up, but Furlong and Andrew Porter went through the wringer.

END_OF_DOCUMENT_TOKEN_TO_BE_REPLACED

France had the edge, come scrum time, but both Furlong and Porter put in incredible shifts out and around the pitch. As the game went on, both men grew into the contest and started to have more an more influence. Gluttons for punishment, if you will.

It was little wonder that Furlong was in with Les Bleus, after Ireland's tough defeat, looking to toast to a fierce contest. In Baille, he found an agreeable soul to raise a bottle with.

You'll have one you will?pic.twitter.com/DeR3sTuhWu

END_OF_DOCUMENT_TOKEN_TO_BE_REPLACED

Furlong's teammate Hugo Keenan remarked that Furlong is friendly with a few of the French forwards, after past battles, and he was probably keen to get away from the pall that hung over the Irish dressing room. He could at least cross the hall knowing he, and his teammates, had left everything out on the pitch.

On the latest House of Rugby URC [LISTEN from 6:30 below], former Munster and Ireland tighthead John Hayes spoke with Greg O'Shea, Megan Williams and Jason Hennessy about Furlong's performance in Paris, and his development into a world-class operator. 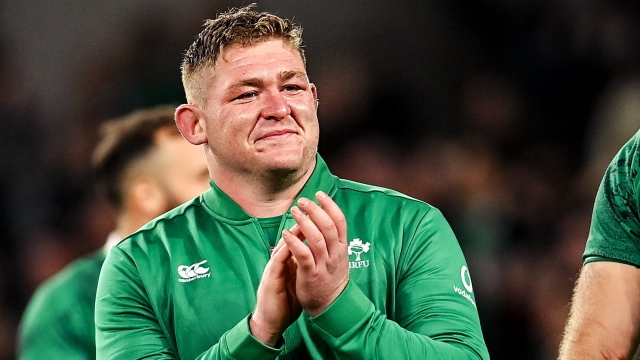 Tadhg Furlong has made 53 Test outings for Ireland since his debut in 2015 . (Photo by Ramsey Cardy/Sportsfile)

END_OF_DOCUMENT_TOKEN_TO_BE_REPLACED

"They're doing long shifts now," John Hayes observed, "and probably longer than any other props in the Six Nations, because they're that good.

"And with Rónan Kelleher being out and Dan Sheehan being in from some early, they probably left the lads out there with him a bit longer." Hayes added:

"They struggled a bit at the start, with one or two scrums when they went back and the French went after them. By the end of the day, they were still back on top and doing very well - no fear on them at all.

"Tadhg was carrying well for one of the tries, Jamison Gibson-Park's. Still punching holes and working. It was a big day for those boys, but they stood up for it."

Asked what his thoughts were on the modern-day prop - playing first receiver and doing pull-back passes - the 106-times Test capped Hayes joked, "Ah, you'd do it in training, when there was no-one looking!

"Everybody imagines trying to do it, and pulling it off, but he is doing it under pressure. It's not something that happens once in a while. Ireland are playing now where he's a ball-playing forward, and they know he can do it. Again, he's just taken it to the next level."

Hayes says he sent out a message to the Bruff U10s team that he coaches, on the day of the game, and reminded the youngsters to watch the France vs. Ireland game closely. The plan was to try make some of the similar plays, in Sunday training, that they had seen the day before on TV.

It did not surprise him in the slightest that so many of the young players, and not just the forwards, wanted to try do what Tadhg Furlong was doing against the French. "Ah, they idolise him, they do."

As role models go, the Bruff U10s have two good ones in their coach, and Furlong.


popular
QUIZ: How many of the 10 most successful football counties can you name without making a mistake?
Conor McGregor and Floyd Mayweather 'in talks' about a rematch
Éamonn Fitzmaurice explains Aidan O'Shea's best position and how it can be used against Kerry
Matt Le Tissier says he asked Sky Sports why they never sacked Jamie Carragher
Patrick Vieira claims he was 'much better' than Roy Keane in new interview
Steve McClaren issues warning to Man United players
You'll have to be red-hot to get 20/20 in this 2010s footballers quiz
You may also like
3 days ago
Stormers' Hacjivah Dayimani still celebrating URC triumph in full kit, four days later
3 days ago
"Brave" Harry Byrne backed to lay down World Cup marker in New Zealand
4 days ago
"It's pathetic!" - Romain Ntamack defended after changing room footage criticised
4 days ago
"I just remember the room erupting!" - Nick McCarthy on coming out to his Leinster teammates
4 days ago
Danny Care and Billy Vunipola make 36-man England squad for Australia
6 days ago
"I was never supposed to be here" - Emotional Ellis Genge reflects on Leicester's league triumph
Next Page