"Too soon to say, but I don’t think it’ll keep Joey Carbery out of the World Cup"

The next few days and weeks will see many of us rugby fans becoming experts on ankle injuries and rehab procedures.

Ireland knew that they were unlikely to get through their four World Cup warm-up games without picking up any casualties. They would have ben left cursing, all the same, when Joey Carbery was brought from the field of play on a motorised stretcher.

Carbery contributed nine points (one try, two conversions) in Ireland's 29-10 victory over Italy, at the Aviva Stadium, but lost Carbery and Rob Herring to injury. 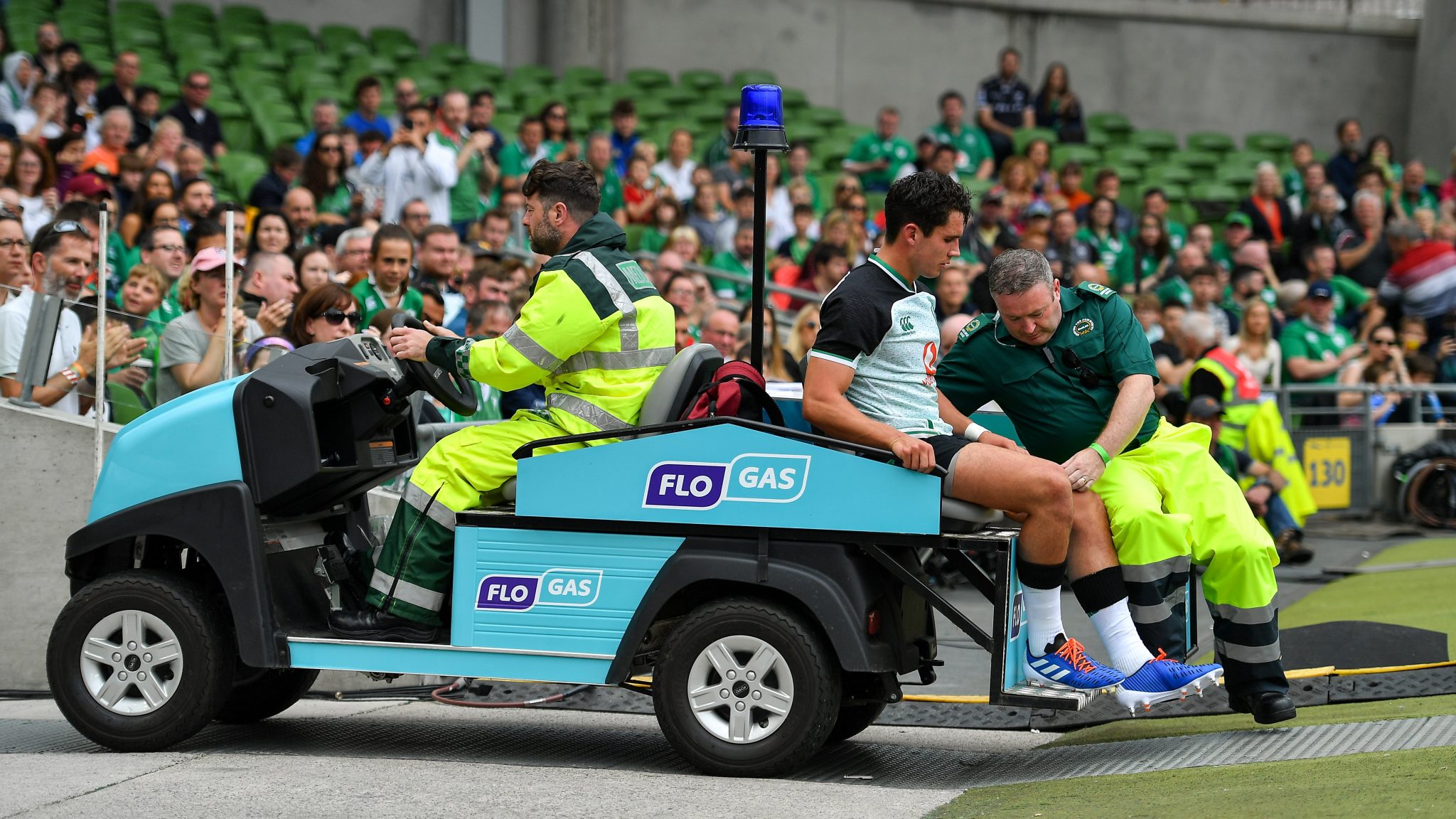 Herring's back flared up early in the day and he left the field after only 16 minutes, replaced by Niall Scannell. Ireland found themselves 10-7 behind but got a hold of the game and were leading 24-10 when Carbery picked up his injury at a defensive ruck in Ireland's 22.

Following his side's 19-point win, Joe Schmidt spoke with RTE about Herring and Carbery. He commented:

"With Joey, I can say there is no fracture because we’ve had him x-rayed in there. He has a bit of swelling, so we will let that go down and get it scanned. If we don’t think it’s too bad he’ll rehab in Portugal ahead of the England game. If not England, hopefully Wales.

"It’s too soon to say, but I don’t think it’ll keep him out of the World Cup."

END_OF_DOCUMENT_TOKEN_TO_BE_REPLACED

In his post-game press briefing, Schmidt said, "The good news  [on Carbery] is there is no fracture. It’s a bit puffy on the left side of his ankle. We have to give it 24, 48 hours to let the swelling go down."

Although there is no fracture to Carbery's ankle, further scans are likely to show up some sort of ligament damage.

Ireland do not play again until August 24, against England at Twickenham. Carbery is unlikely to feature in that game and may not play against Wales the following week. It is early stages, yet, but his most likely target will be the Wales game in Dublin on September 7.

Just six weeks to go to the start of the World Cup and Ireland are already worrying over a key player.

popular
The SportsJOE 12 o'clock quiz | Day 186
How The Mountain lost 36kg ahead of boxing fight with The Beast
Only old-school fans will get 20/20 in this 1990s footballers quiz | Part 2
Sam Bennett's green jersey masterclass got Lance Armstrong talking
"How are we going to get on par with the men if something so simple can't be solved?"
Rio Ferdinand story about Dwight Yorke conversation shows Alex Ferguson's ruthless streak
"He's found a way to do it. Whether that's good or bad for the game, I don't know"
You may also like
11 hours ago
QUIZ: Can you beat the clock to name Ireland's record goalscorers?
1 day ago
Will Ireland's best scrum-half please stand up?
2 days ago
The Ireland XV we would start against Italy
1 week ago
"We'll have to be 10 times better than we were against Ulster" - Robin McBryde
1 week ago
Anthony Stokes has Livingston contract terminated after Astro Turf struggles
1 week ago
Andy Farrell will be sorely tempted to finish the Six Nations with these lads
Next Page