Do not be surprised if Ross Byrne and Jack Carty get more game time than expected during the upcoming warm-up games.

Johnny Sexton and the Ireland squad will head out to Portugal on Wednesday. He will be the most closely monitored of the Irish squad over there, and over the next six weeks. Ireland simply cannot afford anything to befall their presumptive No.10.

Joe Schmidt first told RTE and then Channel 4 that Joey Carbery had not fractured his ankle. Up next, a room full of journalists eager to press for more on the outhalf's injury.

Ireland beat Italy 29-10 but these four warm-up matches are about three things - fitness, form and injuries. You strive for two and pray to avoid a bad dose of the other.

Carbery was having a fine game in teal [or whatever colour Ireland's change jersey is] when he badly jarred his left leg in a defensive effort. His knee and ankle went askew, under serious duress, and he knee he was in trouble.

'This is the big problem with warm-up games, these are the risks' - The RTÉ panel discuss Joey Carbery's injury against Italy. #rterugby pic.twitter.com/R6Tiz9zScu

Schmidt took his seat at the top table, for the press briefing, and his first few questions were dealing with injuries to Devin Toner [ankle], Rob Herring [back] and Carbery. He began:

"The good news with Joey is that there's no fracture. It's a bit puffy on the inside of his left ankle. We're going to give that 24-48 hours for the swelling to go down. If we need to get a picture of it, we will.

"Obviously, he's had the X-Ray and he's been cleared of the fracture. That's the good news on Joey. We don't have anyone else, whose of major concern. First game of the season, there's a few lung injuries, guys who couldn't get enough oxygen in. One particularly that Rhys [Ruddock] suffered when he got hit quite hard after giving a scoring pass that he didn't really get a good look at but Joey Carbery certainly enjoyed the end of it. We're hopefully relatively unscathed but Joey obviously, will take 24-48 hours to know for sure."

Schmidt attested to being 'really happy' with Carbery's performance, and rightly so. The Munster 10 was one of Ireland's players on the day and his only real flaw came in the two touchline conversions he missed.

END_OF_DOCUMENT_TOKEN_TO_BE_REPLACED

"Defensively he got himself into the right places," Schmidt said, "and that's a challenge sometimes. I thought he ran the game very well, obviously the variety of his kicking game and he is a dangerous runner with the ball. He finished the try with a nice carry but he almost got through the line a couple of times. He presents himself as the threat really well and links well. As a package, I thought Joey's game was really tidy.

"He wouldn't be the same player as Johnny," the Ireland coach added, "and he's still building his game. Unfortunately, he's had a few injuries this year that didn't allow him that real continuity at 10 where he wants to play. He'll be looking to build on the back of what he delivered today." 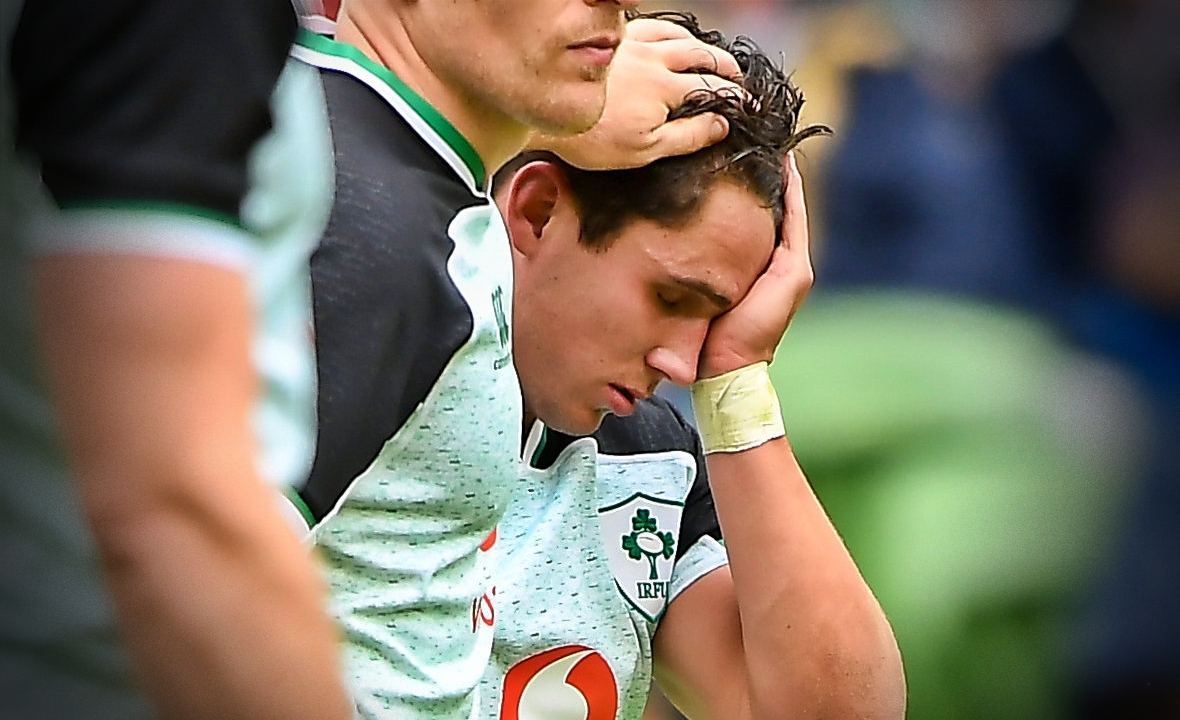 Joey Carbery of Ireland is consoled by Andrew Conway after receiving an injury against Italy. (Photo by David Fitzgerald/Sportsfile)

Ireland have three other outhalves in their 43-man squad - Johnny Sexton, Ross Byrne and Jack Carty - and Schmidt was asked if Carbery's injury would change his plans for Sexton.

The Kiwi began by stressing that his plans would not be altered before admitting that, yes, they might be. He stated:

"Not really, I think we'll forge ahead with probably the plan we've mapped out already. To be honest, we don't get back together until Wednesday so it gives us enough time to have a bit more clarity about Joey.

"But you’re right, then we may adjust our plans. We know we have to hit the ground running. We know how big the Scotland game is and we can't really afford to have anyone underdone either. "

Simply put, as much as there may be a temptation to take Sexton out of the line of fire, the Leinster man needs game-time to be ready for everything Scotland and Japan will throw at them in their opening pool games.

Asked if Sexton could start, if so required, against England on August 24, Schmidt said, "Yeah… to be honest, he could have played today.

"He trained fully, in the footage that I’ve looked at from the week. Apparently he trained very, very hard yesterday morning, which is great. I would anticipate that he would train fully in Portugal and that he would be available for England."

Being available and starting against a tough England side, at Twickenham, may yet rest on those scans and tests on Carbery's ankle.