Back in September, two months after turning 28, and after 59 Test caps, Joe Marler announced his retirement from international rugby.

END_OF_DOCUMENT_TOKEN_TO_BE_REPLACED

Marler, who helped England to Guinness Six Nations titles in 2016 and 2017, had toured with his country to South Africa and had played superbly in the Third Test in Cape Town.

The Harlequins prop played all 80 minutes of that 25-10 win over the Springboks and, on the latest episode of JOE UK's House of Rugby, he recalled a conversation he had with one of Eddie Jones' assistants when it was suggested, around the hour mark, he might be replaced.

"It was about 50 or 60 minutes in the last Test and Wisey - Scott Wisemantle - came on and he was like, 'Mate, boss says you've got five more minutes'.

"And Wisey was like, eh, I'm not going to do that Joe, and then he ran off with the waters.

"So we carried on about another 10 minutes and Wisey comes back on - 'Boss says last effort, mate. Last couple of minutes'.

In that final 10 minutes, England added 10 more points to their score to win comfortably against the hosts. Marler can't tell for sure if Jones ever got the full extent of his message but he reckons the Aussie did.

"I was shattered. A brilliant finish to the game but I was done. I had made my decision (to retire) and was sat there on one of the stools, with the boys, at the after-match function. Got a glass of red and someone taps me on the shoulder. It was Eddie.

Marler reckons it was because he knew that would be his final Test match, he spoke from the heart and cared little for the consequences. Jones, as outspoken as they come, clearly respected that. 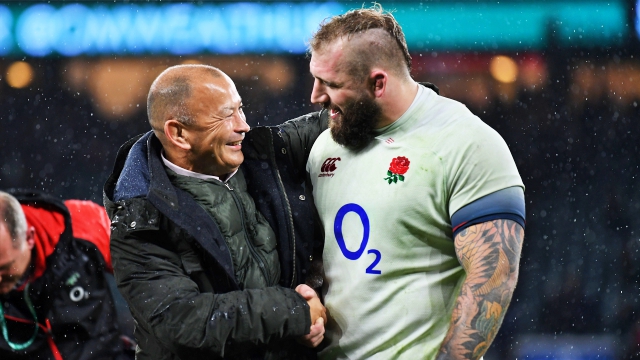 England's first-choice loosehead prop is the impressive and powerful Mako Vunipola but Marler always pushed him hard. Indeed, 43 of his 59 Test caps were in the No.1 jersey, as opposed to coming off the bench.

END_OF_DOCUMENT_TOKEN_TO_BE_REPLACED

He easily could have been playing in this year's Guinness Six Nations and travelling to Japan, in the autumn, but he made the decision to step away from international duty to have more time at home with his young family.

Asked by host Alex Payne if he would answer the call from Jones should England be in need of his services for the World Cup, Marler replied:

"In the very unlikely event that Eddie comes to me and goes, 'Mate, we need you to come and hold a pad and do Mako's training', I don't know. You never say never.

With Marler, he is only every half-serious half the time but, knowing Jones too, we would not be surprised if that message wasn't far off the truth.

For now, though, Marler is focused on club duty with Quins and spending more time at home. After a well-earned summer off, a refreshed Marler could still be worth reaching out to as he is still one of the country's top loosies.

Episode 19 sees Alex Payne joined by James Haskell and Joe Marler to discuss leaf-blowers, retiring from England duty at 28, refusing to be subbed and the upcoming third round of the 2019 Guinness Six Nations.


popular
Gary Neville reveals Man United ignored advice to sign Joao Cancelo
Rhodri Giggs accuses Gary Neville of hypocrisy over Salford sacking
"I think there are only five Kilkenny players who are guaranteed to start on any given day" - Cody's motivational methods
Billy Sharp breaks silence after attack from Nottingham Forest fan during pitch invasion
"County football isn't for everyone" - Down captain Barry O'Hagan hits back at criticism
Erik ten Hag identifies Ajax defender Lisandro Martinez as Man United transfer target
Boris Johnson slams Jurgen Klopp for defending Liverpool fans booing national anthem
You may also like
1 month ago
Join Munster legend Billy Holland for this free mortgage masterclass
3 months ago
[CLOSED] COMPETITION: WIN a two-night stay at the luxury Trident Hotel in Kinsale Harbour
5 months ago
Here's where you can find some incredible deals on exercise machines in 2022
5 months ago
WATCH: This clip shows just how amazing amateur clubs in Ireland really are
5 months ago
Pieta and Shane Carthy encourage people to take part in #HopeOverSilence this Christmas
7 months ago
If you're looking for affordable health cover and 24/7 access to medical pros, this could be just the thing...
Next Page