Arriving at Munster Rugby's High Performance Centre on Bank Holiday Monday, it is Rhys Marshall that lets us in.

The centre, at University of Limerick, is as close to a ghost town as you are likely to see all season. It will fill up later this afternoon but it is just after 10am, the Treviso game was less than 48 hours ago, the Guinness PRO14 awards were last night and the Kinsale Sevens were on over the weekend. Tenders heads. Tender bodies.

Most of the Munster squad are on well-earned days off. The season was extended, by a game and two weeks at least, by a late, late win over Treviso in the quarter finals.

Johann van Graan and CJ Stander had, before the awards on Sunday, had tried to focus on the positives. "Against Treviso," Jerry Flannery admits to us, "we were terrible."

Flannery arrives just after Marshall and the rehabilitating Keith Earls follows soon after. The Munster forwards coach is in with his laptop open and waiting for Leinster footage to arrive so he can plough into preparations and analysis for the semi final.

The former hooker is still in good shape and he shares old rehab stories with Marshall before letting the Kiwi go first for his interview. Flannery listens in for a couple of minutes, perched on a bench in the Munster gym, before going off to do a few reps himself and see who else is knocking about.

When it is his turn, he takes a seat opposite his old teammate Barry Murphy and the chat - for Baz & Andrew's House of Rugby - begins. There is talk of Flannery's love of Chelsea and early, teeth-grinding obsession with schools rugby before [from 40:00 below] we get down to the nitty-gritty. 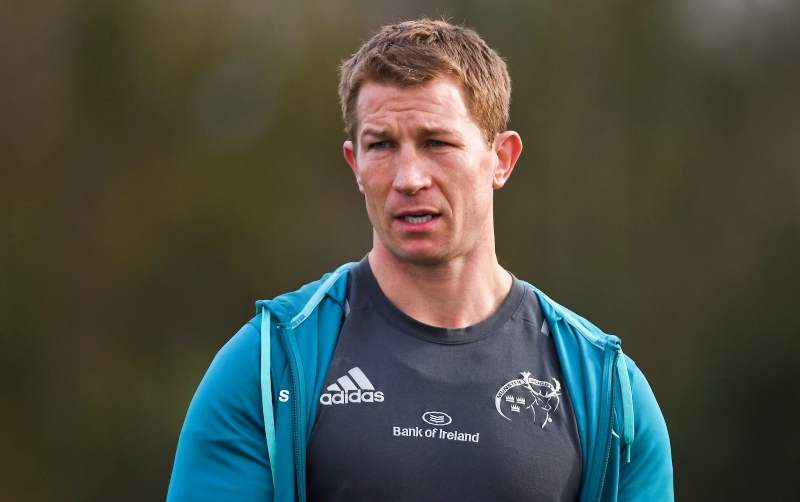 END_OF_DOCUMENT_TOKEN_TO_BE_REPLACED

Flannery retired from rugby in 2012 and worked over with Arsenal FC for a couple of years before Anthony Foley recruited him to be scrum coach at Munster. He stayed on when Rassie Erasmus came in as director of rugby and was named forwards coach before the arrival of Johann van Graan as head coach.

The end of the season will mark the end of Flannery's five-year coaching stint with Munster. Both he and backs coach Felix Jones are departing once the season wraps. Munster say both men were offered improved contracts but there has obviously been an impassable impasse.

That news came 24 hours after Flannery and Murphy sat down to talk, for the show, but Flannery's comments on delivering a trophy for Munster were somewhat portentous. It would not be a stretch to suggest that the wheels of his his departure were already in motion.

This would be his final interview as a current, and not 'out-going', Munster coach.

On the drive to finish this season with a trophy, Flannery mused, "It's so worthwhile because it changes how you look at your life.

"For me, that's the importance of it, for me, because I can look back on my time as a coach and say, 'Ah, I actually won something'. And it's not about me, personally. It's, as a coach, you have to try and get the environment right.

"Munster have to be within touching distance of winning something all the time. It's nice saying that, and that... but it hurts every time you lose in a semi final because you question EVERYTHING that you do. and you question, you know, where are we falling down, why are we not good enough here, were we not addressing this enough.

"It's burning really hard for me to try and, you know, I just really want to win something for Munster and repay everything that Munster has done for me personally.

"But I want the players to win it as well, because I know how hard they are working. Just because you are working hard, every other team is working hard as well, but... I just feel that if we can get a bit of luck. I look at Leinster, in 2009, when Leinster beat us in the European semi final. They just massively kicked on from there. I feel that we need to get a break at some stage."

Interview over, Flannery shakes hands and goes over to check his laptop. The Leinster footage has dropped and there is work to do. There is always work to be done.

Finishing up with a trophy is still possible but Munster will have to back up their regular season win over Leinster and do it at The RDS. Scale that mountain and a final at Celtic Park awaits.

Life, and Munster, will move on after the season wraps but seeing Peter O'Mahony raise a trophy is the hell-bent focus and Flannery has already pushed every chip into the pile.

popular
The SportsJOE 12 o'clock quiz | Day 77
Baz & Andrew's House of Rugby - Jacob Stockdale sets sight on Lions
The SportsJOE 12 o'clock quiz | Day 76
QUIZ: Can you name the Football Italia cult heroes? | Part 2
The SportsJOE 12 o'clock quiz | Day 75
QUIZ: Can you name all 24 champions of the English football league?
SportsJOE 2000s Football Quiz | Round 4
You may also like
1 week ago
Tadhg Beirne on the Wayne Pivac request that helped change his career
1 week ago
Baz & Andrew's House of Rugby - Tadhg Beirne and John Cooney
2 weeks ago
How Munster could line out after confirmation of fourth major signing
1 month ago
Munster's James Cronin gets one-month ban for 'unintentional anti-doping violation'
1 month ago
"Am I going to be safe? Am I going to come home healthy?" - Munster doctor joins Covid fight
2 months ago
'Paul O'Connell re-arranged my living room furniture' - a rugby ref's tale
Next Page