It was not his night, at Eden Park, but calls for change are premature.

Jamison Gibson Park will have pictured his first ever Test match outing at Eden Park going better than what went down on Saturday night. Much better.

Playing behind a pack that did not have it easy, and with set-pieces either just holding their own or failing at crucial moments, the Leinster scrumhalf often tried to force the issue. Keeping a pep in his teammates' steps, and the opposition on their heels, has worked so well for Gibson Park in the past. In the First Test, it worked wonderfully for the Keith Earls try after 18 breathless phases.

END_OF_DOCUMENT_TOKEN_TO_BE_REPLACED

On another couple of occasions, Gibson Park tried to keep the hammer down with pausing for a beat or two would have served his side better. It caught Ireland out, on 36 minutes, when he sniped off the back of a claimed Irish lineout and was turned over inside his 22. The All Blacks feasted all over that steal and, mere seconds later, Quinn Tupaea was celebrating by the posts after a Beauden Barrett grubber in behind the up-rushing green lines.

The other big blips saw the scrumhalf standing with his arms raised in protest as ruck ball was stolen right under his noses, and allowing the ball to bounce out of play after James Ryan stole a New Zealand lineout. That saw the ABs get another lineout and they claimed that comfortably.

With Johnny Sexton off, after a blow to the head, Andy Farrell left Gibson Park out there until the final 10 minutes, as Conor Murray needed to cover 9 and 10. Murray enjoyed a lively, productive cameo off the bench, mainly because the hosts were happy to lay back on their six-try laurels.

The under-par display of Gibson Park has led to some calls for Murray or Craig Casey to get a chance in the Second Test, but Andy Farrell should hold firm on this one. 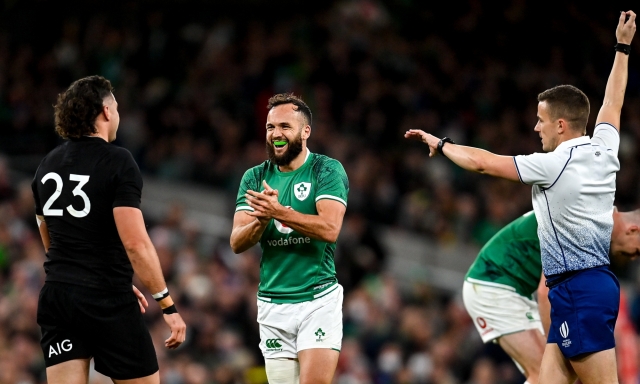 Jamison Gibson Park not playing 'in a dinner suit'

END_OF_DOCUMENT_TOKEN_TO_BE_REPLACED

It is easy for some to forget, given Leinster's end-of-season dip and the First Test loss, how much Ireland have come on with Jamison Gibson Park firmly pressing that pedal.

Andy Farrell went back between the 30-year-old and Conor Murray in 2020, after professional rugby resumed services. It was not until the France game [a defeat] in the 2021 Six Nations that the Ireland coach pushed his chips towards JGP. Since then, the tempo and attacking intent of Ireland has taken an upward curve.

END_OF_DOCUMENT_TOKEN_TO_BE_REPLACED

Park upped the ante in wins over Wales and Italy, got his first Test try in a home win over Japan, then played his best game in green as Ireland sizzled the All Blacks in November 2021. That game was a prime example of the poise, speed-of-pass and precision of the Leinster man. He was relentless and drove his team around at a rapid rate.

Back in May, Gibson Park was being lauded as the best scrumhalf in the northern hemisphere. Former England and Lions outhalf Stuart Barnes said the former Hurricanes star was up with James Lowe as the best in Europe. He declared:

"Scrumhalf Gibson-Park is, at present, the best No 9 in this hemisphere, with Antoine Dupont, of Toulouse, who Leinster will face in the semi-finals on Saturday, enduring the first dip of his career."

What appears to be happening is the Irish pack have a few key pillars - Tadhg Furlong, James Ryan and Caelan Doris - that have not been at their fearless best in recent weeks. It could be a mixture of injuries, the end of a long season or meeting the very toughest sides at the business end of a campaign. Whatever it is, the pack is lacking their usual punch and Gibson Park is not as bullet-proof as he so often looks.

Beauden Barrett remarked, earlier this week, that Ireland can't play as well as they would like to if the All Blacks don't allow their half backs to 'play in their dinner suit'.

The Kiwis are looking to get at the Gibson Park and Sexton, and it is up to the Irish pack and centres to give them something to think about.

Andy Farrell will name his team for the Second Test on Thursday morning [Irish time] and it would be as surprise if Jamison Gibson Park is not named at 9.

His form over the past two seasons has afforded him the right to have one off-day. Any more than that, for him or some of his vaunted teammates, and big changes could be coming for the series closer in Wellington.


popular
Ranking the best county GAA songs of all-time (32-1)
"It was unfair on the Galway backs” - Tomás Ó Sé admits that Kerry benefitted from unfair rule
Adrien Rabiot's mother has put Man Utd move at risk of collapse
"I’ve never heard someone say something as stupid” - Katie Taylor blasts Jake Paul's rematch comments
Antonio Conte 'banishes' four Tottenham players from first-team
"I don’t trust you" - Joey Barton delivers brutal dismissal of Irish defender
"I remember just hugging this Irish guy" - How one Kiwi rugby star reacted to Ireland's historic series win
You may also like
2 weeks ago
“My confidence was on the deck" - Aaron Connolly explains why he has made the move to Italy
2 weeks ago
Every Irish transfer in football, this summer, as several big deals get done
2 weeks ago
Six Irish players make damn impressive 'World XV' that would take some beating
3 weeks ago
The frontrunners for Ireland's 33-man squad for the 2023 World Cup
3 weeks ago
All Blacks media manager explains why Ian Foster appearance was cancelled after Ireland defeat
3 weeks ago
Warren Gatland selects nine Irish players in his strongest Lions XV, right now
Next Page