It's hard to gauge at times what can be more impressive - an irrepressible rise or sustained excellence?

A 20-year-old making his international debut (before his first provincial start) and then winning 19 consecutive games is probably a bit more eye catching than a 34-year-old winding down his club career in Paris, but while James Ryan has had one of the all-time standout debut seasons, namesake Donnacha is playing as good as he ever has in what is now his 14th season in professional rugby.

The Nenagh native was an unused substitute in Munster's 2008 Heineken Cup final win over Toulouse when 11-year-old James was finishing primary school and nearly a decade later and it was James that was essentially drafted into the Ireland national squad to replace Donnacha after he was told that he was no longer worthy of a central contract by the IRFU.

END_OF_DOCUMENT_TOKEN_TO_BE_REPLACED

It's a ritual process in professional rugby even if it can be a harsh reality. The young replace the old and the old usually replace the older somewhere in the south of France or in the Top League in Japan.

Donnacha Ryan has not moved to the south of France and he certainly has not headed to Paris for some sort of pre-retirement party.

The former Munster lock has been an instrumental part of a Racing forward pack that have established themselves as one of the most disruptive packs in European rugby this season.

His second-row partnership with Leone Nakarawa is the perfect complement of styles. Ryan is the tough, gritty, line-out technician. A player who spent the formative years of his career studying and eventually competing with Paul O'Connell, Donncha O'Callaghan and Mick O'Driscoll at Munster. END_OF_DOCUMENT_TOKEN_TO_BE_REPLACED

Nakarawa by comparison is the freewheeling, offloading, 6 ft 6, 17 st 2 lb lock that runs like the wind and hits like a train.

They're different players, most locks in Europe are when matched up with Nakarawa, but together they complement each other brilliantly. Ryan has even said as much.

"You see how hard he trains and it does give you that confirmation in your head that it does take hard work to get to the level that these guys are at," the former Ireland international said of Nakarawa.

"Unfortunately, I don't have octopus hands, but he is able to get fantastic offloads! 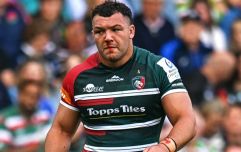 END_OF_DOCUMENT_TOKEN_TO_BE_REPLACED

"He is very exciting to play alongside and very positive. He is always looking to try something new and it's different to any second-row partner I have had, but one that I am enjoying a lot."

James Ryan and Devin Toner share a similar partnership, albeit without the octopus hands.

Toner has re-established himself as Leinster's line-out leader and has proved to be quite an effective force at protecting his own ball at the breakdown while Ryan has simply been a force upon himself as he regularly clocks double-digit marks in both the carry and tackle counts.

His range of passing and offloading is not quite Nakarawa-esque but it's at a high enough level that he's able to create tries for others around him by simply driving into tackles and freeing his arms either before or during contact. A process that looks a whole lot easier than it actually is for someone with his size and frame.

His workrate, offloading, tackling and consistency have been hallmarks of his play this season and he's emerged as a force in a Leinster forward pack that is brimming with heavy hitters.

There's so many individual battles to consider for Saturday's Champions Cup final in Bilbao.

There's Johnny Sexton and Pat Lambie, who might not cross each other's path too many times directly on Saturday, but who will both play vital roles in how their sides fare, particularly in Lambie's case given the loss of halves partner Maxime Machenaud.

There's fascinating individual matchups throughout this final but maybe none more so than the second-row battle of James Ryan and Devin Toner matching up with Donnacha Ryan and Leone Nakarawa.

Leinster have not lost a line-out in this year's competition since the Pool stages while Munster head coach Johann van Graan hailed Racing's line-out defence as second to only the two-time defending world champion All Blacks.

"Their lineout contesting is second to the All Blacks, I believe. They really put you under pressure," said van Gran before his side fell short in Bordeaux.

"Then they have players who can deliver big moments: I thought Patrick Lambie played pretty well in the quarter-final.

"When you can bring on players like Dan Carter and Joe Rokocoko, you know that you've got depth in your squad."

When you can bring on the likes of Joey Carbery, Andrew Porter, Rhys Ruddock, Jack Conan and a British & Irish Lion in Jack McGrath off your bench, you know that you've depth in your squad, but when you can pair an unbeaten 21-year-old with a 58-cap international and a former Wallabies captain just behind them in close support, you also know that you have a lot of quality in your starting side.

Leinster have an abundance of quality and they should have enough to beat Racing to claim their fourth European Cup on Saturday, but if they don't, these two could have a big part to play in their demise.


popular
"This game is going to get abandoned" - Mass brawl between Kilcoo and Burren results in six red cards
"He'll have the best seat in the house" - emotional Mageean pays tribute to late great Kiernan after the race of her life
Quiz: Which player has scored more goals for Ireland?
Teddy Sheringham says Roy Keane didn't speak to him for three years at Man United
Court hears cringeworthy poems Ryan Giggs wrote to his ex
Your guide to a huge weekend of sport and how to watch it all
Kylian Mbappé wants to 'dismantle Argentine Republic' at PSG
You may also like
3 months ago
Steve Borthwick on the Leicester Tigers 'show of hands' before Leinster clash
3 months ago
"Leinster have got to come to our backyard. It’s our gaff" - Ellis Genge
5 months ago
Leinster GAA appoints 30 new full time coaches to help rest of province compete with Dublin
5 months ago
Dublin likely to play Leinster semi-final outside of Croke Park for the first time in 26 years
6 months ago
"He's available for selection" - Mark Vaughan is still playing his part in making Kilmacud Crokes history
6 months ago
Craig Dias on club All-Ireland run, winning Leinster, and making his second debut for Dublin a decade after his first
Next Page