After eight weeks on the sidelines, Leinster welcomed back a man that could be key in them securing that fifth European Cup title.

Rather than focus on the Ireland internationals in Leinster's starting XV, against Leicester, those that decry the province's success, but would love to see it emulated, should focus on the 19 of the match-day 23 that came through their academy. James Ryan is one of the 19, and Leinster prospered with him back, and bulling about.

Monday at UCD and Robin McBryde sat back and listened. It was, in fairness, a rambling question [from this reporter] about English media, and team, gripes about salary caps. Asked, eventually, if it was annoying that Leinster do not get enough credit for their academy system, and developing their own talent, McBryde offered up his one-word reply - "Yeah".

END_OF_DOCUMENT_TOKEN_TO_BE_REPLACED

While some of the leading French club sides are operating with astronomical playing squad budgets, they may point to large TV rights deal - €454 million over four seasons - the Top 14 has with Canal+.

As for the Irish provinces, centrally contracted players will be on decent wages with the IRFU but that number has dropped to around 14 or 15 [down from 22] in recent years. Commercial deals for high-profile players do help, as salary top-ups.

Rugby fans will have read reports on how the Welsh Rugby Union are considering reducing the number of professional sides from four to three. If English clubs wanted to get close to the Irish model, though, they would have to consider reducing their top-level contingent to possibly only 10, and a debate on who to cut loose would drag on years. They may also want to invest more in their academy structures.

On Saturday, at Welford Road, Leinster gave another academy prospect, Joe McCarthy his Champions Cup debut. He replaced Ryan, who graduated from the academy in 2017, with five minutes to go as Leinster beat Leicester Tigers 23-14 to advance to the semi-finals.

The successful return of Ryan, two months after he was stood down due to accumulated concussions over an 18-month period, is a massive relief, and boost, for the four-time champions as they chase trophies on two fronts. 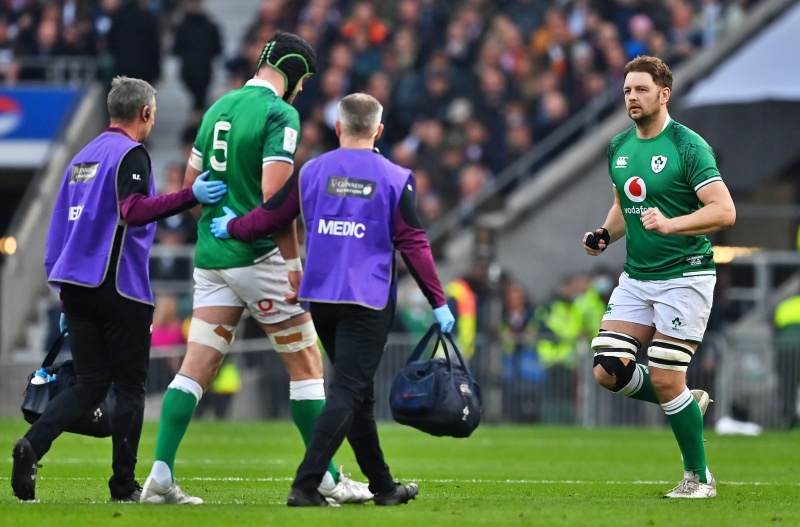 Iain Henderson of Ireland comes on to replace James Ryan, at Twickenham Stadium, in March. (Photo by Brendan Moran/Sportsfile)
Advertisement

END_OF_DOCUMENT_TOKEN_TO_BE_REPLACED

James Ryan was helped off the field, at Twickenham, on March 12 after a collision with Charlie Ewels that saw the England lock red-carded for going to high.

Asked if there was a concern, at any stage over the past eight weeks, that Ryan's season could be done, Leinster assistant coach Robin McBryde replied, "From the medical point of view we’ve been led by the experts.

"I thought he played really well," he added. "That was the best I’d seen him train leading up to the game; the ownership he took from a defensive lineout point of view, that came through. He had some great steals at the front that really got us out of a sticky situation.

"There has been a little bit more attention to detail in regards to individualising his programme, trying to make him move a little bit better so he doesn’t find himself in certain situations and in a bad body profile.

"He’s worked hard and it’s good to see the fruits of all that work come good, I’m really chuffed for him."

Ryan wasa magnificent in the win over Tigers, but he will know the tougher test will be against Toulouse at Lansdowne Road, on Saturday afternoon. He is likely to be up against two from Rory Arnold, Joe Tekori and Emmanuel Meafou - each one a big unit.

For the second season running, it is Leinster against the French sides in the final four. Fit and cleared, James Ryan will be at the vanguard of all their best efforts to reach the final.