"We were at the pub when he hit that drop goal and we nearly brought the roof down!"

James Lowe may have loved nothing better than winding Johnny Sexton up when he first arrived at Leinster, but each minute more he spends in the outhalf's presence convinces him he is in the right place, and made the right move.

He may not be Irish qualified yet (if he does choose to go down that route) but few on this isle enjoyed Sexton's drop goal winner against France than the 26-year-old winger.

Lowe could have easily enjoyed a 12-season career as a Super Rugby talent and highlight reel favourite but, with a Test cap for New Zealand looking unlikely, he made a tough choice and packed his bags for Europe. A laid-back character away from the pitch, Lowe has demonstrated a steely determination to succeed.

He has scored six tries in eight games so far this season [16 since arriving last December] but he would have got as much pleasure from his 72nd minute kick-chase and turnover against Bath, at The Rec, in a vital Champions Cup win.

Lowe is making improvements to his defensive and all-round game, under Leo Cullen, Felipe Contepomi and Stuart Lancaster, but he can see even more ground that he can make up.

The Kiwi sat down with Andrew Trimble and Paddy McKenna for a live episode of Baz & Andrew's House of Rugby [from 41:00 below] and spoke superbly about his rugby journey and what the sport means to him. 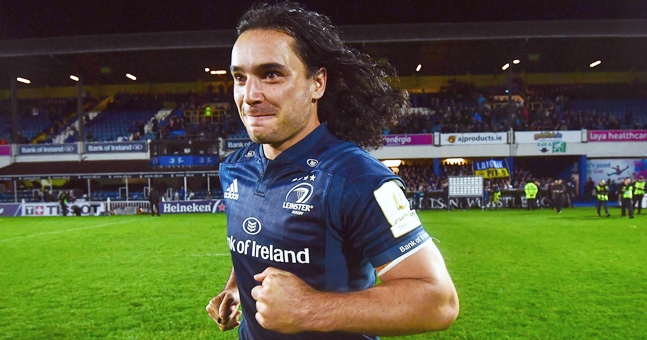 Lowe's parents, Jeff and Yvonne, were at the live recording and he spoke about how much their support means to him. "They've always been very supportive of me and they've come to, literally, every game when I was growing up.

"As a kid, we lived in a little town called Nelson and every second week they'd be down in Christchurch, which was a five and a half hour drive away. My old man has been through thick and thin...

"At the end of the day, I'm here to play rugby and it is the one thing I'm decent at. So the rugby side is all easy, and it is pretty much all you see, but it does suck not having family, or immediate family around. But it's easy enough to call home, you know.

"I'm an uncle now, of a little one back home. He seems to have taken over the mantle and he's taken over my room as well, and he doesn't even live at the family gaff! But they're always just a phone call away and I'd talk to my parents, or brother and sister, once a day. It does suck that you're not there for the big occasions - Christmas and the birthdays - but I'm also in Dublin, playing footy, so that's the price you've got to pay."

For Lowe, as good as he was at athletics, cricket and football, rugby was constant.

"In the winter," he says, "when you were not playing rugby, you'd play touch in the summer, so you'd learn all the little skills. Everyone plays touch.

"At lunchtime, in the gym, our year group would play full-on rugby - like a league - in our socks, in the gym. So you'd always be running straight and smashing each other but you'd always have a rugby ball in your hand. You'd never get hurt, don't worry... but there were a lot of bigger kids than me at school, don't you worry!"

James Lowe was drafted into the New Zealand Schools team, and was capped, at 17 and, two years on, made his senior club debut for Tasman. The Waikato Chiefs came calling in 2014 and Lowe had three seasons of Super Rugby before making the hemispherical switch to Leinster.

He was a key figure in Leinster's Guinness PRO14 title charge, last season, but missed out on the business end of the Champions Cup. This season has seen him step his game up even further and if Leinster can repeat the double dose this season, their electric Kiwi winger will have a big part to play in it.

popular
The SportsJOE 12 o'clock quiz | Day 76
SportsJOE 2000s Football Quiz | Round 4
The SportsJOE 12 o'clock quiz | Day 75
Conor McGregor's next fight narrowed down to two options
"Paulie was like Casper the Ghost... he had lost about two stone in the two days"
Lady Gaga will perform Satanic ritual during Super Bowl halftime show, according to conspiracy theorist
Shaquille O'Neal is now a part-time police officer in Florida
You may also like
1 week ago
Baz & Andrew's House of Rugby - Mike Brown on past battles with Ireland
2 weeks ago
"He walks into the dressing room and Pienaar goes, ‘We can’t win’!"
2 weeks ago
Baz & Andrew's House of Rugby - Finn Russell on life in Paris
3 weeks ago
Ben Youngs talks about Leicester Tigers' infamous Tuesday training sessions
3 weeks ago
Ryan Baird on his physical and mental preparations to hit rugby's return running
4 weeks ago
"He's a massive human being with an unbelievable skill level" - Jean De Villiers
Next Page