James Lowe facing into the biggest month of his career

"It's difficult on the edge at Test level – you can get exposed."

Before James Lowe even arrived in Ireland, many of us where excited about what he could bring to our Test side.

That sense of anticipation only heightened when he started lighting it up for Leinster. Those that scoff that his try-scoring stats [33 in 49 games] are padded in a strong Leinster side ignore the opposition defences - Munster, Toulouse, Bath, Wasps, Ulster - he has breached.

The hope was that he would instantly replicate his Leinster for in a green jersey, and his Test debut was excellent, but the step up to international level has already hit some bumps. While Lowe has looked promising in attack, and possesses a whopper left boot, he has been caught out defensively in his last three games.

On the latest House of Rugby Ireland, host Eimear Considine spoke with Fergus McFadden and Tomás O'Leary [LISTEN from 12:00 below] about Lowe's recent struggles and if he should start the next Six Nations game. 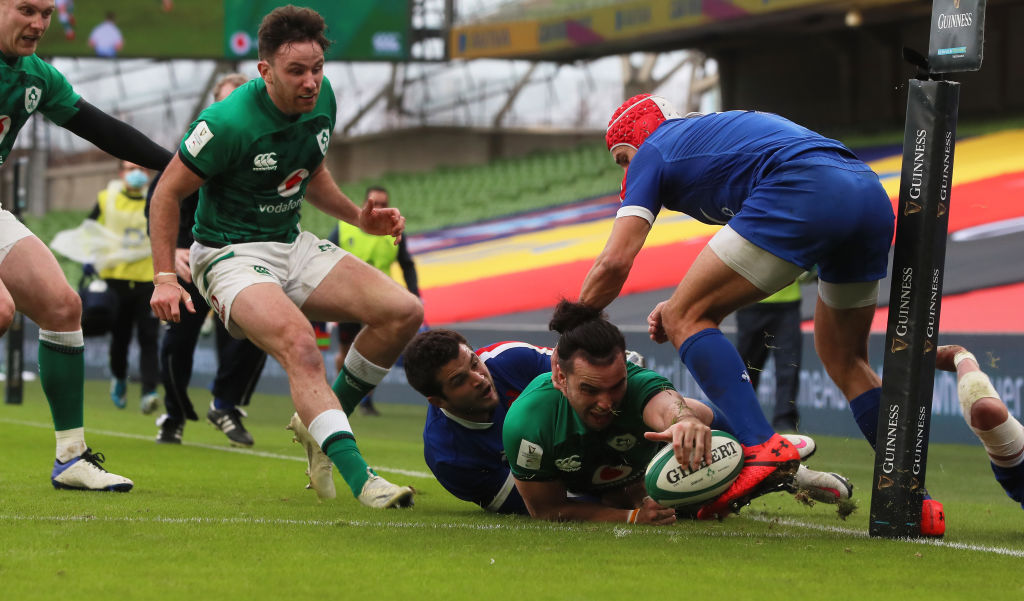 James Lowe goes close against France, but the TMO ruled his foot was in touch. (Photo by Brian Lawless - Pool/Getty Images)

Against France, James Lowe looked to have taken on Brice Dulin and Gael Fickou to score in the corner, but TMO replays eventually showed a foot in touch.

Lowe was strong in bouncing Dulin but the arrival of Fickou gave the Frenchmen enough momentum to make that crucial difference in sliding his foot over the line. Hugo Keenan could have done better with delaying his pass a tick to give Dulin something more to think about.

END_OF_DOCUMENT_TOKEN_TO_BE_REPLACED

That was as close as Ireland got - bar that Ronan Kelleher opportunism for an eventual seven-pointer - to breaching that French line. They did not get too many bites of the cherry in the French 22.

While the Leinster winger would have backed himself to get that first half try, he will definitely be hard on himself for not sticking a big tackle on Dulin just before France's second try.

Matthieu Jalibert, on 54 minutes, was under pressure from Tadhg Beirne when he threw up a floater to Dulin. It did enough to tempt Lowe into making the hit but Dulin got the ball just in time and stepped inside the Ireland No.11. 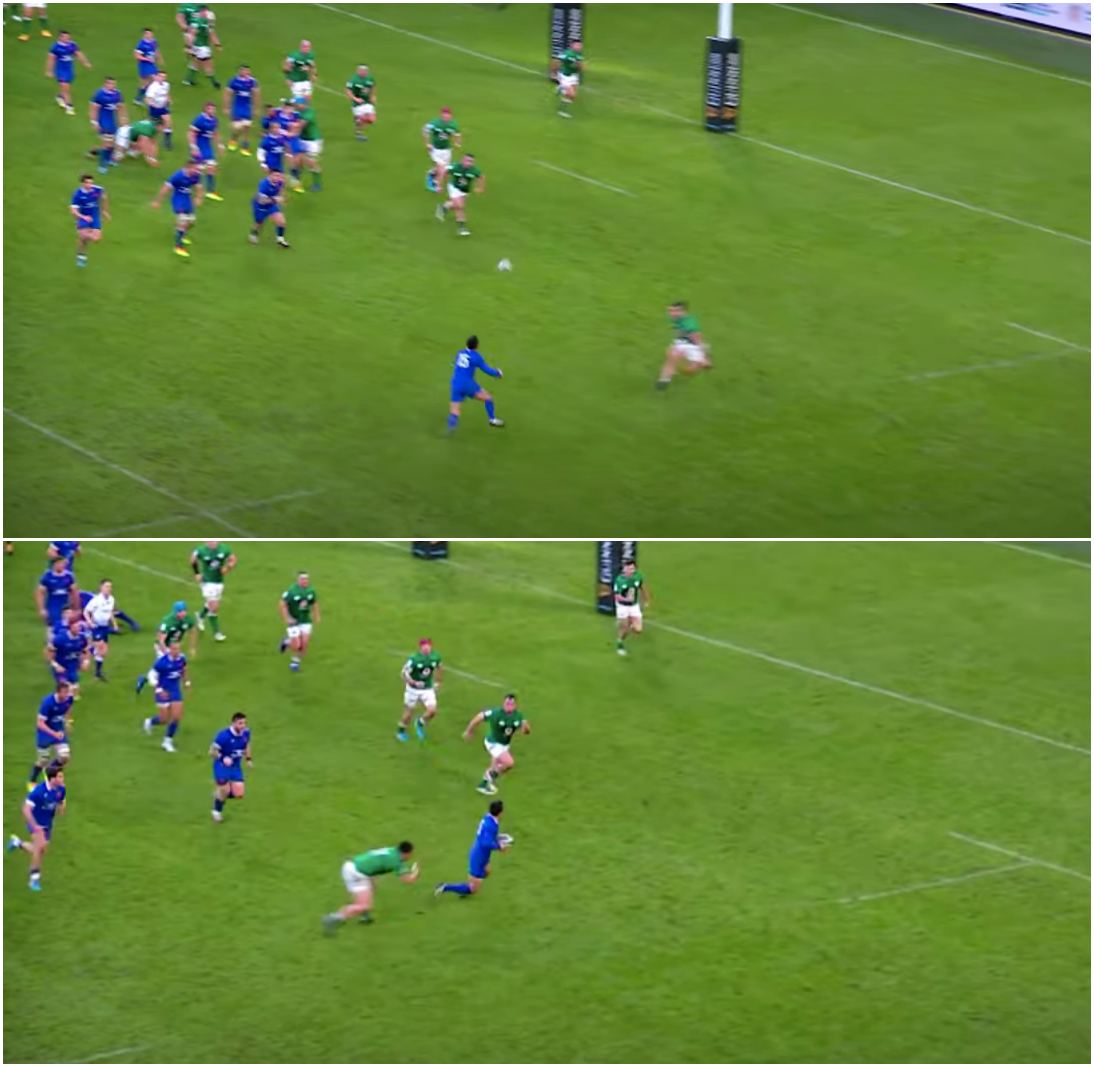 "James Lowe was in that position [against Wales]," noted Considine, "and you have to make a decision, as a defender. You’re either going man-and-ball or you’re bowing out and just waiting for it.

"That decision didn’t work out well again today. But Lowe, who we spoke about last week, he actually had seven attempted tackles and four missed. That’s not a good enough stat as a winger, especially when tries are scored down your wing."

McFadden admitted Lowe 'probably wouldn’t be proud of that stat' before giving an insight into defending on the edge in Test rugby.

"I mean, he brings so much to the team in attack. And his kicking today was such a weapon. I think I said it the other day, he must have one of the biggest left boots in the world. Particularly after having Rob Kearney leaving, you can just have him in to relieve that pressure, and some of his kicking was great.

"But it is difficult on the edge at Test level – you can get exposed. I’ve been exposed plenty of times at that level, when you miss a tackle. I might have only three to make but I’d miss one and it’s for a try.

"People forget that in and around the ruck – from the first defender to the fifth – that the spaces are so tight that if someone in there, a prop or a lock, misses someone, they’ll get cleaned up by someone else. Whereas the guys on the edge – the 13, 15 or winger – you miss a tackle there and there’s going to be tries. Because the guys are so quick and there’s more space to run into.

"I mean he’ll probably look back on the clip of… James will probably look at where Dulin steps in. Again, a very tough tackle for him there as he’s lunging and his weight isn’t underneath his feet, and he’s just trying to grab him. Dulin steps in and he manages to flick it to Damian Penaud for that important try. It’s tough. I don’t know exactly what the system is that Simon Easterby has the running, but it might just take a little more time for James to get used to it." 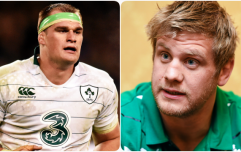 END_OF_DOCUMENT_TOKEN_TO_BE_REPLACED

There is no denying that Lowe has some serious kinks to iron out in his defence. He was caught out by that Jonny May brilliance, last November, and did not cover himself in glory against Wales. He has attempted 20 tackles in four Tests and missed 10 of them.

Jordan Larmour is the player nipping at both Lowe and Keith Earls' heels and Jacob Stockdale may be back for the final championship rounds.

He is worth sticking with for the championship, though. He came into the Six Nations having not played a match in 11 weeks and Farrell has asked a lot of him by throwing him straight back in.

In attack, he has made 45 carries and gained 277 metres with four line breaks and six defenders beaten. Ireland are gung-ho for the kick and chase game, for what it's worth, and Lowe gives the ball a fearful thump.

Now that his match fitness is returning, it is not the time to bench or drop a player of his genuine class.

As Lowe will acknowledge himself, he is facing into the biggest month of his rugby career.


popular
"I couldn’t speak, but Rhys could see that something serious was going on"
"Twas often I felt like firing a boot at him' - Micko's words of consolation didn't go down well in Cork
Springbok star Eben Etzebeth's lockdown workout would break most of us
Endearing Keith Earls story proves he will never forget his roots
Eric Cantona confirms famous Roy Keane story about him
Why Jude Bellingham wears the No. 22 jersey
Cabrera and Woods miss their Champions Dinner as biggest week in golf kicks off
You may also like
1 day ago
Three uncapped players named in Ireland squad for Six Nations opener
1 week ago
No Farrell or Itoje as House of Rugby selects Lions team
1 week ago
Youthful XV Andy Farrell could select for Ireland's next Test
1 week ago
"It's a shocking result... That's on us. We should be embarrassed" - Seamus Coleman
1 week ago
Full Ireland ratings after pitiful home defeat to Luxembourg
1 week ago
Gavin Bazunu starts in goal as Ireland team to face Luxembourg named
Next Page