'This has been an extremely challenging time for James and the province'.

Munster and Ireland prop James Cronin has been banned from rugby for one month following an anti-doping violation that an independent judicial officer has described as "unintentional".

The European Professional Club Rugby (EPCR) has established, it says, that the positive test was due to a mix up in prescriptions. Cronin's violation was put down to a dispensing error by the pharmacy that he used. Independent judicial officer, Antony Davies accepted that evidence when it was put forward.

However, the EPCR still felt some sort of ban was merited as Cronin had been found with the substances in his system. He is ineligible to play from April 15 to May 16 but there is unlikely to be any rugby between those dates as the season is on pause due to the Covid-19 pandemic. 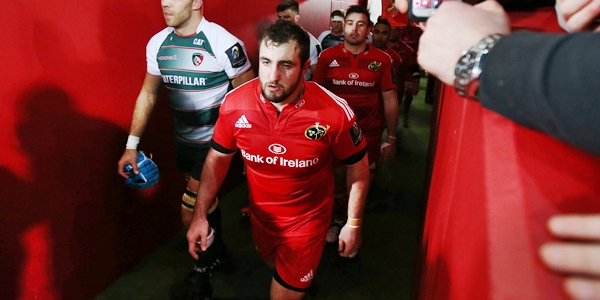 Munster and the IRFU released a joint statement this afternoon stating they had carried out their own internal review on the matter. The findings, they state, conclude that the sanction imposed by EPCR is sufficient in this case due to the strong mitigating circumstances. Munster Rugby chief executive Ian Flanagan commented:

"This has been an extremely challenging time for James and the province, and we are glad it has reached its conclusion.  We have treated this matter with the utmost seriousness, and as always Munster Rugby and Irish Rugby are fully supportive of all Sporting Ireland, WADA and World Rugby anti-doping policies.

"In protecting the integrity of our player, the organisation, and the sport, I can assure you that this unintentional anti-doping rule violation is as a result of exceptional circumstances due to a third-party dispensing error by a pharmacy.  Clearly the sanction is reflective of the strong mitigating factors in this case, and we look forward to James’ return to action."

The 29-year-old prop has 124 appearances for Munster and has three Test caps with Ireland.

The full findings of the James Cronin case can be found here.

popular
The controversial reason Conor McGregor's win over Nate Diaz was not unanimous
QUIZ: You have 30 seconds to answer this one tricky football question
SportsJOE 2000s Football Quiz | Round 11
The SportsJOE 12 o'clock quiz | Day 286
You'll have to be a diehard fan to get 20/20 in this Liverpool players of the 90s quiz
Here's a list of 23 people who own a greater share of the UFC than Conor McGregor
QUIZ: Can you name the Scottish football cult heroes?
You may also like
6 days ago
Darren Cave tells House of Rugby about one part of rugby he definitely doesn't miss
6 days ago
"He's ruptured his hamstring off the bone and he’s trying to get up into the defensive line"
2 weeks ago
"I got the scan and it was literally broken in half" - Ciara Griffin on her first Ireland training session
1 month ago
"I don’t know what his problem is with me" - James Lowe on Liam Williams clash
1 month ago
James Lowe joins House of Rugby to talk Test debuts, Liam Williams and Chris Ashton
1 month ago
Brian O'Driscoll turns tables on South Africa after Ireland's World Cup draw
Next Page