His performance had everything but the one thing he so often delivers on big occasions.

Six of Jacob Stockdale's seven Ulster tries have come in the Champions Cup this season. He thrives in this competition.

On Saturday evening at the Aviva Stadium, with Ulster fans doing their team proud and vice versa, Stockdale lit up one of the season's most entertaining games.

The 22-year-old was supreme in the air as he won four of his five aerial contacts - at full stretch on a few occasions - and made a rake of important carries and line breaks. His 15 carries saw him gain 98 metres, with three line breaks and five defenders beaten.

Had he scored, 45 minutes in, when he had all the Ulster fans and plenty of neutrals out of their seats, we would have been raving about him all week. Instead, he will be left with bitter memories of his first European Cup quarter final.

Ulster's players came thundering out of the blocks in both halves and looked to drive home their half-time advantage (13-11) when Stockdale danced and ducked past three Leinster players.

Dave Kearney was the last line of defence and a big grin broke out on Stockdale's face as it dawned on him that he would beat the Leinster 11 to the tryline. Once he got beyond the tryline, though, the nightmare began.

Hindsight is, of course, wonderful but Stockdale would have been better off diving to ensure he got a clean grounding of the ball. He stayed upright and dipped to dot down but the harrying of Kearney forced and error and the ball skittled loose from his grasp just inches from the ground. 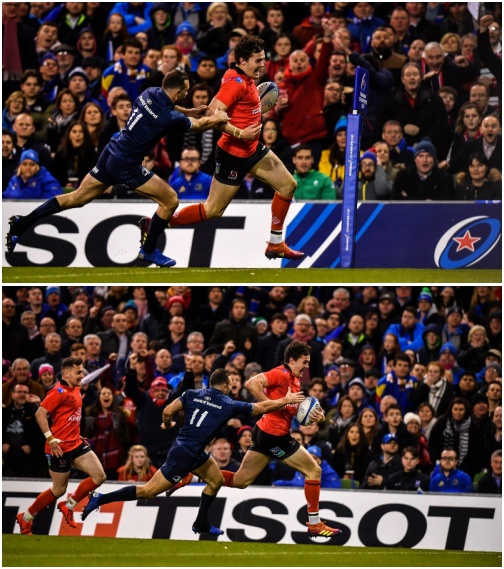 Each replay, looped four or five times on the big screen made it hurt even more. A glorious chance had been missed.

"I know what you want me to say and I'm not going to say it... there's not that many people in the world that can beat that many players to get into the position to get the ball down. I'm proud of Jacob."

END_OF_DOCUMENT_TOKEN_TO_BE_REPLACED

Stockdale kept his ears pinned back and made a couple more good carries - featuring heavily in the build-up to Luke Marshall's try - but Leinster kept coming back.

Ross Byrne's 70th minute penalty proved crucial and it was the winning of the match, putting Leinster 21-18 ahead. There was no way back for Ulster.

At the end of the game, Stockdale cut a distraught figure. He looked close to tears as he placed a hand over his face, as his teammates started to walk through a corridor of clapping Leinster players.

Three teammates - Kieran Treadwell, Billy Burns and John Cooney - all went straight to Stockdale to try and gee him up. There were arms around the shoulders and a few words said.

McFarland said there were a lot of heads down in the Ulster dressing room at the end of the game, and Stockdale was no different.

Having exploded onto the scene for Ulster and Ireland, the past couple of months have shown Stockdale to be human after all. The season is not over yet, however, and he could still be a hero yet before the last ball is slung.


popular
The SportsJOE 12 o'clock quiz | Day 16
No fear of McCarthy losing a lifetime of fitness
You'll have to be an old-school fan to get 20/20 in this 1990s footballers quiz
Only a devoted diehard would ever get full marks in our Liverpool quiz
"Am I going to be safe? Am I going to come home healthy?" - Munster doctor joins Covid fight
Ireland set for dramatically new look as Stephen Kenny takes charge
The SportsJOE 12 o'clock quiz | Day 14
You may also like
2 months ago
Ulster join Leinster in Champions Cup quarter final after tense Bath victory
2 months ago
What Munster and Ulster need to get a Champions Cup quarter final
2 months ago
Munster's European dreams in ruins after late, controversial try
2 months ago
Max Deegan makes Six Nations statement as Leinster crush Lyon
2 months ago
Injuries to three form players cause Six Nations concern for Andy Farrell
2 months ago
France have got themselves a turnover machine for the Six Nations
Next Page