Ireland's players talk us through their greatest try in five years

"Johnny said it to us out there, we've set a new standard and it's something we need to build on."

It had been over 18 months since Jack Conan last started a Test match for Ireland. He got his chance against England and he will take some shifting now.

With the benefit of hindsight - and another disappointing World Cup - it is easy to look back on how excited so many of us in Ireland got with Joe Schmidt's side in 2018. It was not just the Grand Slam, Australian tour and the autumn win over New Zealand that led to that feeling, though. Ireland were playing some incredible stuff.

END_OF_DOCUMENT_TOKEN_TO_BE_REPLACED

Look back to that year and you'll see those 41 incredible phases when France were stunned in Paris, how easily England were dismissed in that Grand Slam game, David Pocock being defused in Australia and the sheer ferocity of the Irish performance against an excellent All Blacks side in Dublin.

2019 saw Irish standards slip as they seized up before falling at the World Cup quarter final fence and we cursed ourselves for getting too far ahead again. 2020 was tough going that was perhaps best summed up by IRFU Performance Director David Nucifora - Average.

The Irish players backed themselves to go from nearly men to champions in 2021 but that all fell by the wayside after only 13 minutes in Cardiff. Defeat to France, a week later, and everyone was down on them again. Wins over Italy and Scotland helped, but the real test came against England on Saturday. 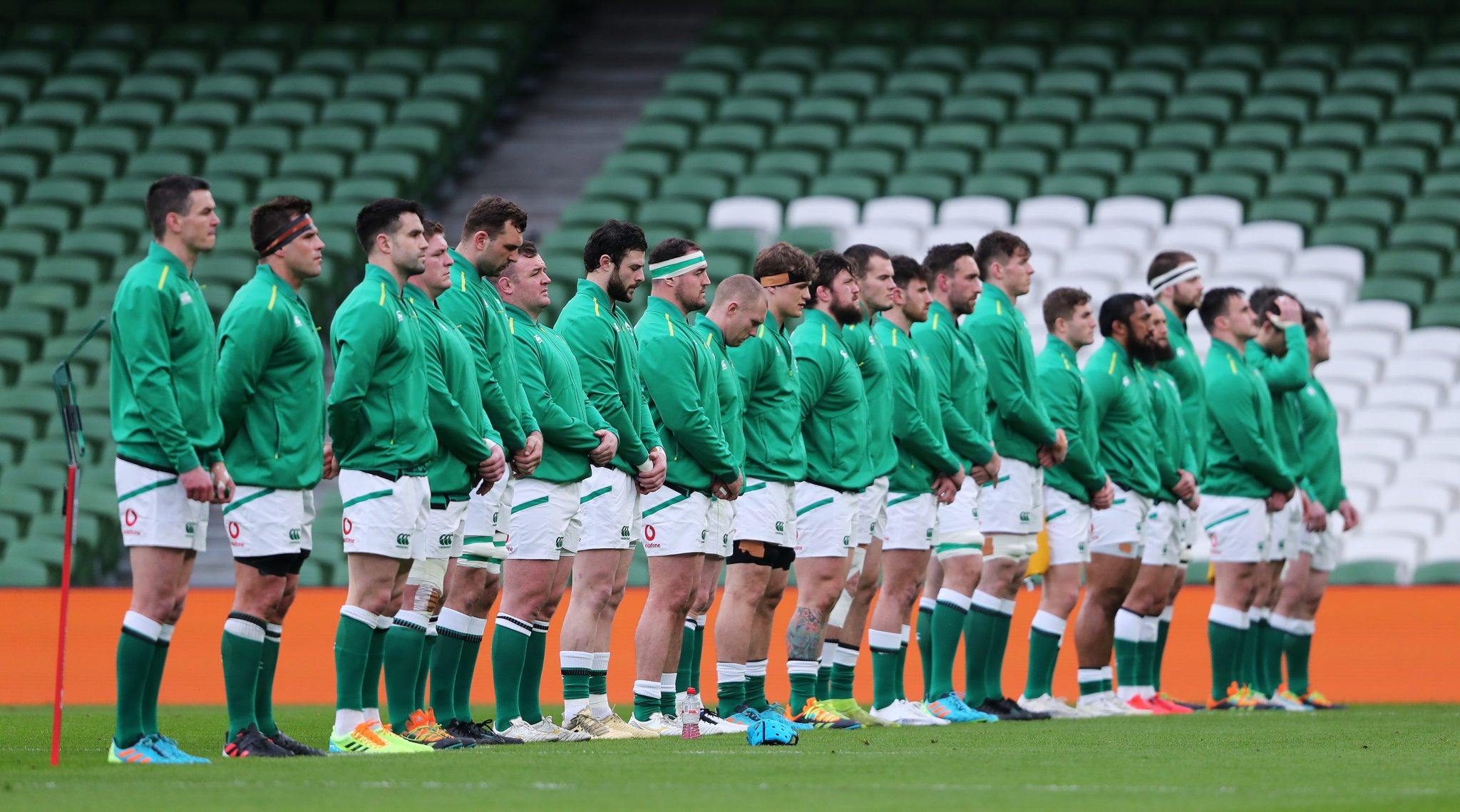 END_OF_DOCUMENT_TOKEN_TO_BE_REPLACED

It was hard going for the first 20 minutes as both sides sized each other up. Ireland were fortunate not to concede a try to Maro Itoje when they sprung Tadhg Beirne too early at a lineout, but Robbie Henshaw and Beirne were leading from the front again and Ireland gradually gained some traction.

Their opening try - a long Rob Herring lineout that Jack Conan caught and pop off to a full-steam Keith Earls - was a set-play masterpiece and one that had many fans sitting forward in their seats. What's all this, then?

Their second try was the best piece of Irish attacking play in three years and their best try since Jamie Heaslip finished off a superb counter against Italy, back in 2016. Let's take a closer look at how it all played out:

END_OF_DOCUMENT_TOKEN_TO_BE_REPLACED

Mako Vunipola is penalised for early engagement at a scrum just outside the Ireland 22. Sexton kicks for touch and Rob Herring gets a lineout throw 10 metres into England's half.

Josh van der Flier makes the first carry and Tom Curry is no far off making a poach before Rob Herring and Tadhg Beirne clear him out. 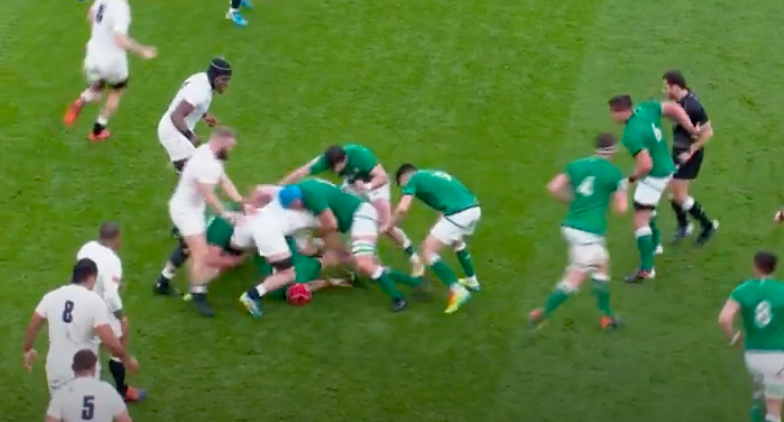 33:34 - Tadhg Furlong makes the next carry and batters back Mark Wilson and George Ford. Iain Henderson spots Maro Itoje lurking and shifts him from the breakdown.

33:47 - Conor Murray skips Henderson and Stander with his next pass, to Bundee Aki. The Connacht centre shifts the ball to Sexton, who fakes to pass and then cuts inside before Billy Vunipola and Owen Farrell bring him to ground.

33:59 - Aki has busted himself to get back across the field and find Henshaw on the charge. He gets past Ben Youngs but is stopped in his tracks by Mako Vunipola. The next phase (5) goes to Beirne but does not gain much ground. It does, however, give the Irish backline time to re-set.

34:12 - Sexton looks to be past Charlie Ewels but is snagged low and presents back to Murray. Beirne carries again but is stone-walled by Mako Vunipola and Kyle Sinckler. Healy (phase 9)

34:35 - The next phase (10) from Stander sees Ireland with forward momentum again but that ground is lost when Murray misses Henshaw with his pass and Jacob Stockdale has to mop up. Curry is in for a look again, but Henderson and Josh van der Flier shunt him out.

Furlong gets them going

34:51 - A Sexton pass to Hugo Keenan sees Ireland make some yards before we have the first real magic moment of the sequence. Murray flings a pass back to Beirne, who takes a big hit from Sinckler but not before getting his pass away to Sexton. Van der Flier occupies Billy Vunipola leaving Sexton to put Furlong through a gap. He is tackled low by Mako Vunipola but offloads to Stander. The Munster man is almost away but Farrell catches him from the side.

35:07 - We see Keith Earls get involved in midfield as he links up with Cian Healy, who takes the ball into contact. What happens next is refreshing to see, as Aki does not wait for Murray to arrive and keeps pace in the attack by playing scrum-half. He finds Conan on the run, up the left flank and Ireland are now just outside the English 22.

35:20 - Healy offers himself up for another carry and Henderson arrives to clear Luke Cowan-Dickie out of the breakdown. Earls stays involved and finds Beirne. His initial carry does not gain much ground, but van der Flier and Earls follow in to shunt him.

35:30 - This is when Sexton made the risky play to go the aerial route. As you will see (below) he caught Jonny May rushing up out of his left wing position and opted to put one up for Keenan to contest with Elliot Daly. The Irish tactic here would be to either win the ball outright, bat the ball backwards or force an English error.

It was definitely reminiscent of Sexton's cross-field kick to Earls against France in 2018. Throwing something in there the opposition would not be expecting. Post-match, Keenan described what was going through his mind:

"Just. Go and get the ball!' I don't think we had any advantage, or anything like that. It's just one of those moments where you have to 100% commit to it. I heard Elliot Daly call for the mark, so it was just about not letting him get to it."

35:35 - Keenan has not only got his hands on the ball, he has won it outright from Daly. Ollie Lawrence rushes back but Henshaw is quick in to protect any steal attempts, with Herring not far behind.

35:44 - England are disjointed now and concede a penalty. Beirne may not be the most dynamic of ball-carriers but he always draws bodies to him. In the clatter, England don't release and Mathieu Raynal calls advantage.

35:49 - Murray finds Sexton, and Furlong runs a dummy line before switching back to Aki, who gets a quick, flat pass away to Conan. The Leinster No.8 then passes to Stockdale. He opts to cut back inside rather than taking on Watson down the outside.

36:04 - Phase 20 sees Murray look left then pass right to van der Flier. Herring and Henderson back him up and get him to ground before Murray finds Sexton to his left.

36:10 - Cowan Dickie falls asleep here as he points to Watson on the wing but leaves a gap between himself and Curry and gets himself wrong-footed. Conan is alive to the opportunity. He picks and goes. Cowan Dickie tackles low and Curry dives in, but it is not enough to prevent the try.

Unrelenting pressure and England being poked, prodded, tested and battered until they could hold out no more.

To get that score, every Irish player had to play their part, from Murray and Sexton pulling the strings to the ruck involvements of all the other 13 players.

And from the Irish head coach and captain, the appreciation of two players that stepped up in that sequence of play.

SEXTON ON KEENAN: "What a play. Those are defining moments. If he doesn't win that ball, England mark it and clear their lines. He wins it and we score a try.

FARRELL ON CONAN: "Jack Conan hasn't started an international for quite some time and he was just himself, so it was pretty fitting that he finished that try off."

All told, a wonderful team try and one that gives Ireland hope that this side could well be going places.

Still, let's not get too excited... yet.