"To pack two Six Nations titles, a Grand Slam and a winning tour to Australia, in a very short international career, is always quite nice."

Yes. For Jack Clifford, that was his Test career with England.

10 games, 10 wins, two Six Nations championships, including a 2016 Grand Slam, and a winning tour Down Under against the Wallabies, and a small dose of vengeance for the 2015 World Cup.

END_OF_DOCUMENT_TOKEN_TO_BE_REPLACED

Jack Clifford was not going places. He was already there. And then, the injuries came.

Clifford had a range of bangs, knocks and surgeries over the years - he joined Harlequins at the age of 13 - but two major shoulder surgeries, following a dislocation, forced him to hang up his playing boots at only 27.

"I had my left shoulder dislocated [in October 2017] then the first surgery failed on it, and I had a few other bits. I talk to people about it now and list all the different things. I've still got about 10 different screws left in me... I went through the wringer in my short, 10-year career. I worked out that I spent about a third of it on a physio bed."

Having retired in August 2020, Clifford is almost two years out of the day-to-day of professional rugby. His body is thanking him for it and, after a tough few months when retirement hit home and the daily routine drastically changed, he is now settled into a job with insurance brokers Gallagher, who sponsor the Premiership.

It was through his job, and his boss - a Leinster rugby cult hero - that Clifford signed up for a cycling challenge that will push him to his limits, while raising funds for a children's rugby charity. 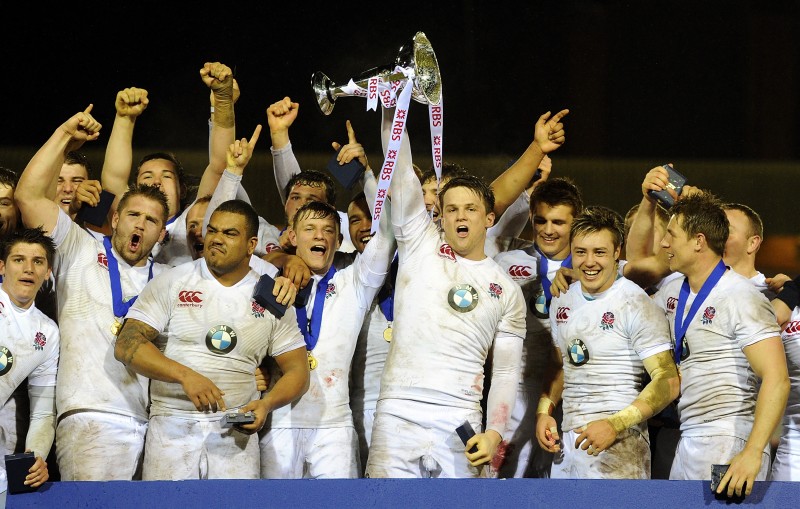 Back in 2013, Jack Clifford was the captain of the England U20 side that won the Junior World Championship. He had already made his senior Quins debut, by then, and had gained other senior experience with Ealing and Esher.

"My team had Anthony Watson, Henry Slade, Jack Nowell, Luke Cowan-Dickie, Kyle Sinckler, and more," he says. "Those are the lads that I've known since I was 16, until the end of my career.

"It was nice, as we all ended up getting capped around the same time... it makes me want to watch the games, as my mates are playing. I still talk to Kyle, a lot, about what's going on at the club, and when he was on the Lions tours. I've known him since I was 12. We used to play against each other, back in the day."

When Eddie Jones took over as England head coach, from Stuart Lancaster, after the 2015 World Cup, he was able to call on Clifford and many of his world champion Under 20 side. Everything was going to plan. 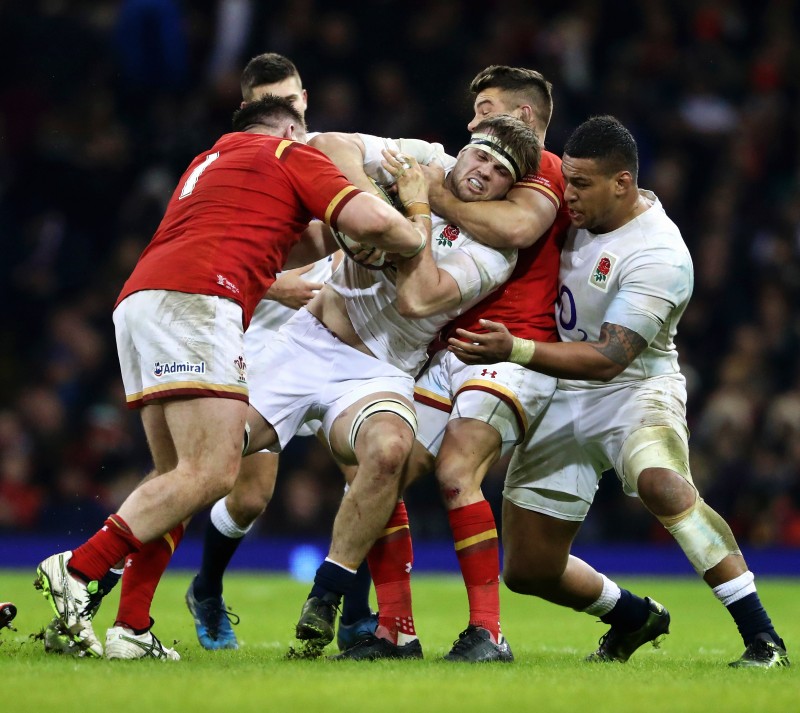 Highest of highs, lowest of lows

Jack Clifford's proudest moment in rugby, he says, was singing the anthem at a heaving Murrayfield ahead of his England Test debut, against Scotland.

He would appear off the bench in that game, and England's other 2016 Six Nations fixtures, and help his side close out wins that amounted to a dominant Grand Slam triumph.

He got his first start, and try, in the No.8 jersey as England beat Wales at Twickenham, before they headed to Australia and won the series there. Jones had a trusted back row trio of James Haskell, Chris Robshaw and Billy Vunipola, but Clifford was next man up. He was being groomed to eventually slot in as a starter.

He started in the 2017 Six Nations win over Wales and off the bench in a win over Italy. Nathan Hughes and Maro Itoje were on the scene and there was fierce competition for the back row. Clifford did not get to add to those 10 straight Test victories after that devastating shoulder injury. He made a couple of comebacks but the shoulder was never right. In reality, although he retired at 27, his career was just about ended when he was 24.

During our conversation, I bring up Dan Leavy to Clifford. The Ireland back row had a similar lightning start to Test rugby - winning 11 consecutive games, including a 2018 Grand Slam - before a knee injury effectively ended his career [he, too, would have a couple of short-lived comebacks.

"I look back on those days as great fun, and I enjoyed every single second when I was playing out there... it is a shame when you are mentioning guys like Dan, who are retiring young. It's not how you'd want the game to be looked upon, at the moment.

"It is a tough game, and you can't pull any punches and say that it's not... it unfortunately takes its' toll." 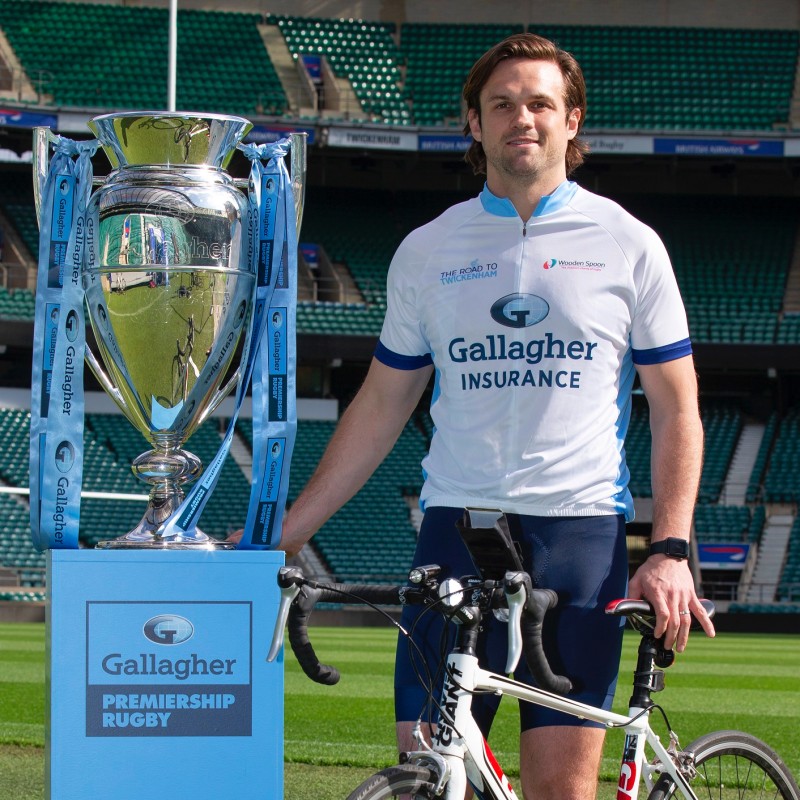 Working across insurance details with Gallagher, Jack Clifford says it was his boss there, former Leinster, Clermont and Scotland lock Nathan Hines that got him involved in his latest sporting challenge.

"Nathan tells it very different," jokes Clifford, "but I got offered the job here and, pretty much, as I was signing all the paper-work, he went, 'Oh, there's a charity bike ride. Do you fancy getting involved?'

"This happens as I was putting pen to paper on my contract. I was like, 'Oh yeah, yeah'. He asked if I cycled, I said of course, and I was signed up. So we're finished up with the contract and I asked where we were going. Nathan goes, 'Oh, it's a 750-mile cycle, from Newcastle to London, going by Exeter'. Oh... okay. That's changed things! It has been a baptism of fire."

Hines and Clifford will be part of the core team of cyclists doing the entire route, but more than 650 cyclists will join in for other parts, and stages, of the 'Road to Twickenham' journey. Prohibited, due to past injuries, from cycling the route, former England and Lions star Ugo Monye will get the challenge underway, and act as hype-man throughout.

"There's some lumpy routes in there," says Clifford. "Without fail, everyone I've talked to has said, 'Don't worry, it's all downhill. Sure you're starting in Newcastle and heading down. But I realised the Pennines are in there, and some other biggies. It's not all downhill!" 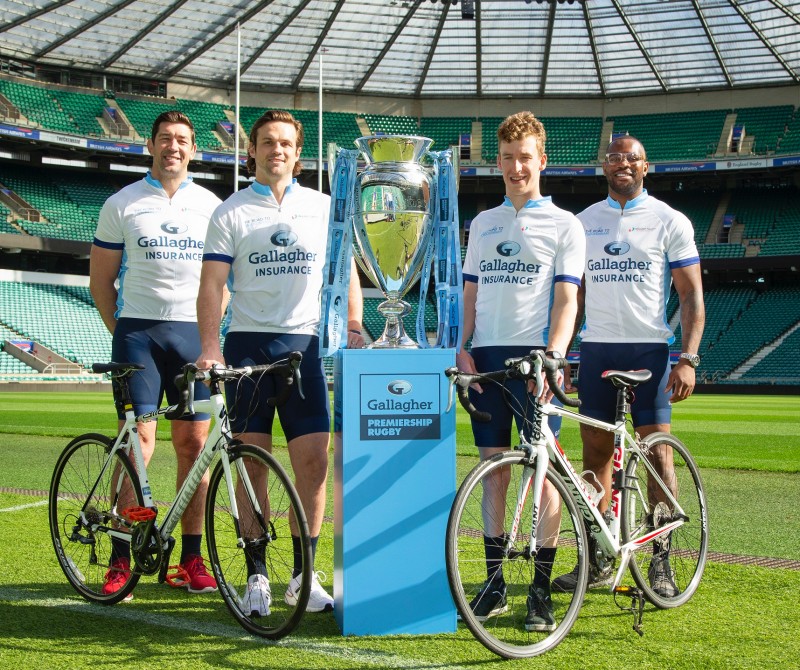 (L to R) Nathan Hines, Jack Clifford, Louis Rolfe and Ugo Monye who will be taking part in the Gallagher Ride -The Road to Twickenham. (Credit: Dan Towers/ Flick Digital)

Gallagher’s Road to Twickenham cycle challenge gets underway on Saturday, June 11 at Newcastle Falcons’ Kingston Park. For more information on how to support, please visit HERE