"Jack did what he does well, and it was the reason we picked him."

While most of the post-match questions revolved around Maro Itoje and Courtney Lawes, there was some love for Lions No.8 Jack Conan.

Selected ahead of Sam Simmonds and Lions veteran Toby Faletau, the Leinster and Ireland star was handed the 8 jersey and told to keep doing what he had been doing all tour.

END_OF_DOCUMENT_TOKEN_TO_BE_REPLACED

Ahead of the game, the Lions bench, and their 24th and 25th men, lined up outside the 'Away' changing room to roar their starting teammates out on to the pitch. While Lions captain Alun Wyn Jones gave each one a nudge, Conan was swinging his left and right shoulders like a boxer getting ready to step into the ring.

In a way, he was. He was biting down on the gum-shield and seeing if he could go 12 rounds with the world champion Springboks.

To stick with that analogy, Conan and the Lions would have been hoping for the bell, at half-time, and grateful of the break at the chance to come up with a different strategy. Whatever they had been trying in the first half had not worked.

The plan for the second 40 was to start strong, trust the kick-chase and target those who were ear-marked as weakest under it. After that, play simple, play direct and cut down the errors. The big ball-carriers were given the pill and told to go straight at the Boks.

END_OF_DOCUMENT_TOKEN_TO_BE_REPLACED

It was no surprise, then, to see Courtney Lawes and Robbie Henshaw stepping up and making more carries. They made 15 between them while Conan topped the charts - 12 carries for gains of 45 metres.

Following the Lions' 22-17 win over South Africa in that First Test, head coach Warren Gatland said, "Jack did what he does well, and it was the reason we picked him - he doesn't make mistakes.

"He's incredibly accurate. He takes those kick-offs, he's got some good foot-work, he got us some go-forward, and he does a lot of the unspectacular stuff that you need in a forward pack to get the balance right...

"I know the first game he played, he was incredibly nervous about his first hit-out. He's one of those players that does get pretty nervy before a game but, this week, he seemed calmer and a lot more assured. I think it has given him a lot of confidence and self-belief in his own performances." 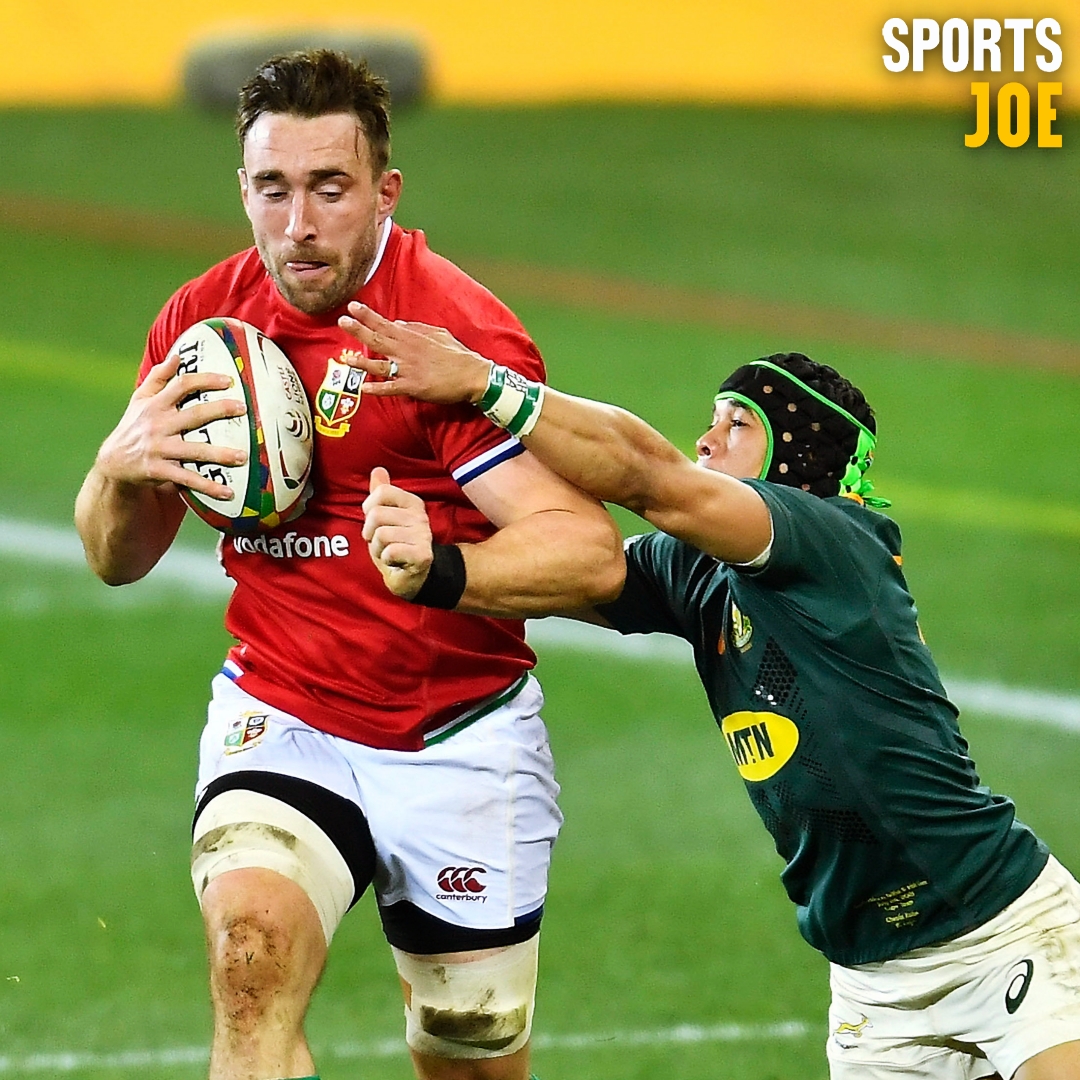 Jack Conan of the British and Irish Lions is tackled by Cheslin Kolbe of South Africa. (Photo by Ashley Vlotman/Sportsfile)

We can't go much further, this evening, without acknowledging captain Alun Wyn Jones. Four weeks after he dislocated his shoulder against Japan, Jones played the full 80 against South Africa and improved as the game progressed.

Post-match, Itoje called said his captain was a high-energy 'senior citizen'. Informed on the line, the Welshman said he was taking it as more of a compliment than a slagging.

The Springboks looked to have punched themselves out as the flagged and gave away penalties in the second half. It was as if someone had slashed all their tyres at half-time.

Lawes was questioned, coming into the game, as the starting blindside selection. He was in full-on defensive mode in the first half but was an attacking force in the second - making two carries in particular that rallied his side. He also made a key lineout take before the Luke Cowan-Dickie try that gave the Lions hope.

Maro Itoje, though, was Man of the Match. He was the Lions talisman and secured them three turnovers, each one of them vital. It was fitting that he made the steal at the death before the ball was hoofed off the pitch and he was swamped by his grateful teammates. 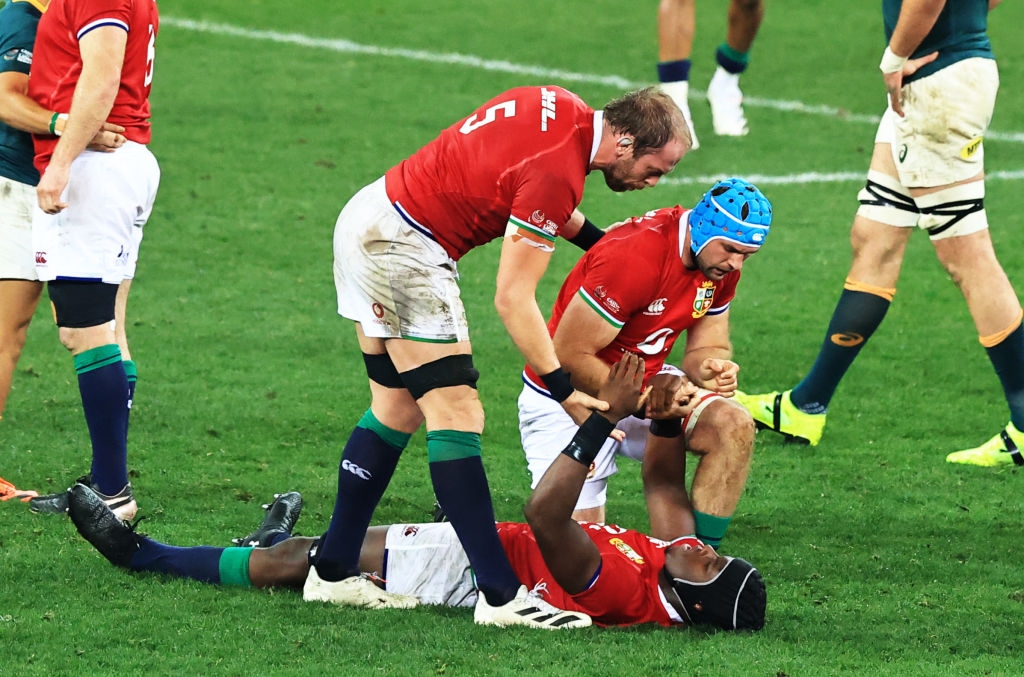 On the losing side, a few performers kept up their high levels throughout the game, even as those in green jerseys around them wilted.

Lukhanyo Am was very good in midfield, and both Robbie Henshaw and Elliot Daly knew he was there. Faf de Klerk was excellent again while Eben Etzebeth did not deserve to walk off that pitch as a loser.

The Lions will feel they won that game on 40 minutes' proper performance levels while South Africa will tell themselves they will be better for that gruelling encounter. Advantage Lions but the series is still very much up for grabs.


popular
World Cup 2022 Day 10: All the major action and talking points
Iran demand action by FIFA after USA team change flag on social media
Thibaut Courtois warns teammates after leaks emerge from Belgium camp
"I can absolutely say that I have never enjoyed a job more" - McKaigue revelling in new role as Slaughtneil GPO
Roy Keane's issue with Argentina star could rival Graeme Souness and Paul Pogba
"I have equal love for football and hurling" - Sheehy set for two Leinster finals in two hours
World Cup 2022 Day Nine: All the major action and talking points
You may also like
1 week ago
"Two Irish players are best in the world" - Rugby reacts to big Josh van der Flier and Terry Kennedy awards
1 week ago
Two baffling omissions as four Ireland stars make World Rugby 'Dream Team' of the Year
1 week ago
Josh van der Flier claims World Rugby Player of the Year at Monaco ceremony
1 week ago
"Highlight of my Ireland career" - Behind the scenes as Jack Crowley and Ross Byrne covered for a legend
1 week ago
Bundee Aki reminded us all of his best qualities, on a night Ireland couldn't do without him
1 week ago
Peter O'Mahony delivered some fitting Jack Crowley comments after surprise Test start
Next Page