Ireland got back to winning ways as they beat Italy to win their 3rd/4th place Six Nations playoff. Our full Ireland ratings see two Sevens stars top the class.

Ireland got over for a try in the left-hand corner after only eight minutes when Stacey Flood's quick-tap penalty set up Dorothy Wall with a one-on-one with an Italian winger, and the Tipp native did the rest.

The only other movement on the scoreboard in a scrappy first half, which Ireland dominated in terms of territory and possession, was a Flood penalty that made it 8-0. 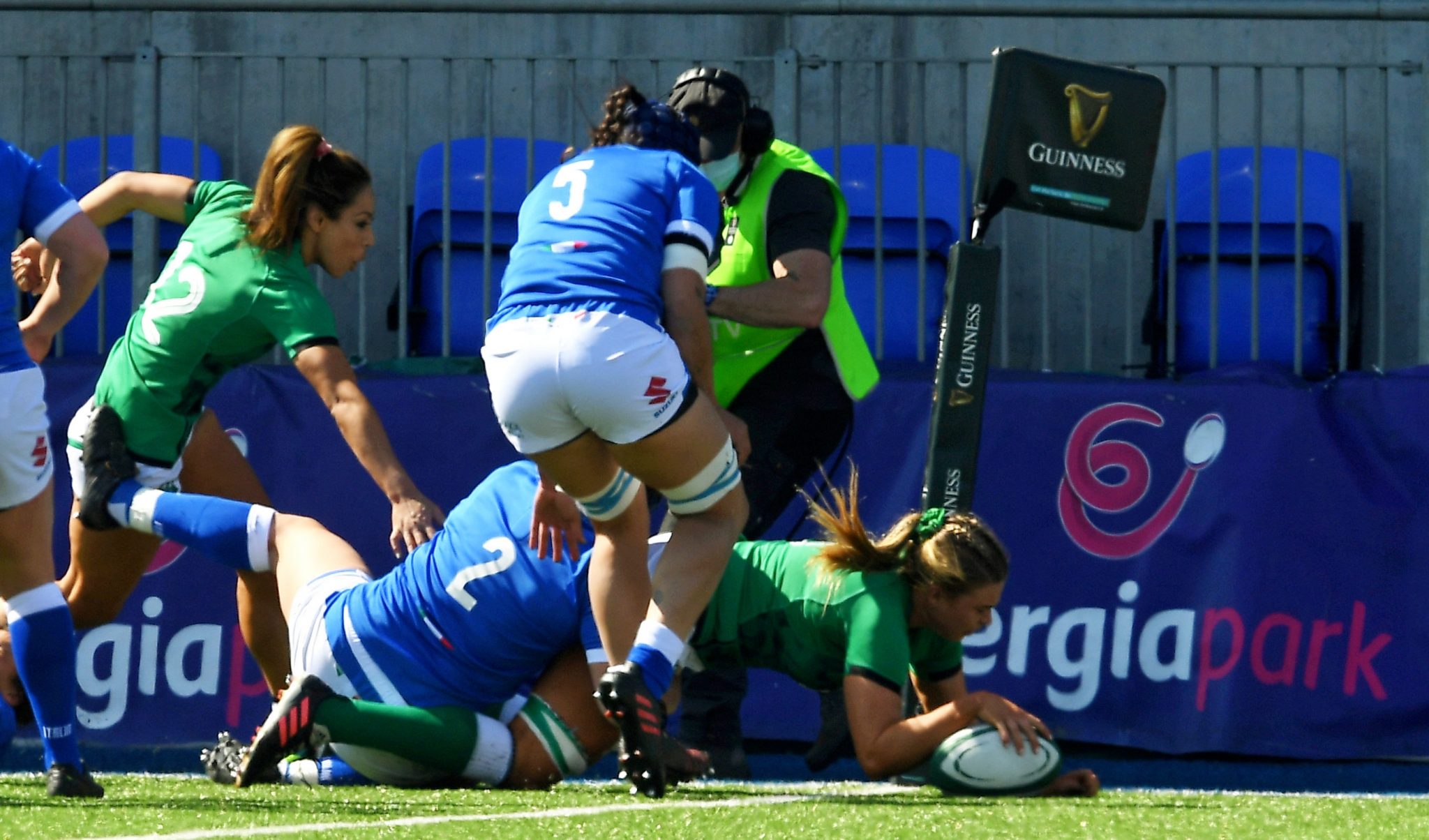 END_OF_DOCUMENT_TOKEN_TO_BE_REPLACED

Business picked right up after only three minutes of the second half as Amee Leigh Murphy-Crowe scorched over for a try off a set-play from an attacking lineout. Seven minutes later and another quick-tap penalty saw Cliodhna Moloney power over.

After 55 minutes, it was Italy that finally came to life. Their scrum started to put Ireland's under pressure and, on 62 minutes, they entered the home 22 for the first time in the game. On 68 minutes, Melissa Bettoni rewarded her teammates' efforts with a try.

The last word went to Murphy-Crowe, though, as she scored a try out of nowhere with the final move of the game.

END_OF_DOCUMENT_TOKEN_TO_BE_REPLACED

A few lusty tackles in defence to keep the Italians on their heels. Composed in defence and made a couple of nice carries. Made a sloppy knock-on in the closing stages. Made a brave take, in the 79th minute, and left the pitch bloodied after a knock to the face.

Torched the Italian defence (below) for her first ever Ireland 15s try. Her second wasn't bad either.

END_OF_DOCUMENT_TOKEN_TO_BE_REPLACED

Her foot-work got her through a couple of tackles and got her team on the front-foot. Solid defence too and teamed up with Leah Lyons for a try-saving tackle.

Penalised for a neck-roll at the breakdown, inside the Italian 22, to let the visitors off the hook. Kick-chase in the second half forced an Italian error and won Ireland back possession.

Excellent line break just before Moloney's try. Was fortunate that her tackle shot in the first half only ended in 10 minutes in the sin-bin. Constantly got over the gainline on carries and made 13 tackles.

Early handling error, over on her wing, ended a promising attack. Made 72 metres off her five carries.

Put the boot to the floor and got her team going with sharp passes and quick-tap penalties, one of which set up Wall for her try. Kicking off the tee was mostly solid but got her third and fourth conversion attempts all wrong. Played the full 80 minutes and won the RTE 'Player of the Match' award.

Like Flood, wanted a high-tempo to wear out the Italians. Passing inside the opposition half was improved from last week.

Strong carries in the first half. Irish scrum started to creak in the second half.

Made some strong carries out there. Boshed through two Italians to score Ireland's third try after a quick-tap penalty. 37 metres made off seven carries and stuck all 11 of her tackles.

Very forceful as a ball-carrier [38 metres made off five carries] but missed three of her 11 tackle attempts. Italy started to put some pressure on that Irish scrum in the final 30 minutes.

Made a vital ankle-tap tackle to prevent a dangerous break that could have cost Ireland a try. Big step-up after her tough day out against France.

Another who put in a better account of herself today. Tidy in the lineout and get through a lot of work around the breakdown.

At the heart of everything for Ireland, sometimes even dropping in at scrumhalf and first receiver. Powered over for a try and teed up Murphy-Crowe for her try. Ireland's top tackler, on 15.

Great lineout take and feed to Wall for that Murphy-Crowe try. Was kept busy around the breakdown and made 13 tackles.

Denied an early try after the ball went forward off a lineout. Left the fray after 13 minutes for a Head Injury Assessment and did not return.

Into the action nice and early after Griffin's concussion. Got herself turned over on one carry to scupper a three-on-one, out wide. Didn't miss a tackle all day.

Stabilised the scrum and made a crucial tackle to prevent an Italian try.


popular
Paul Scholes calls a spade a spade after comeback win
It's often forgotten that Tommy Walsh began his career with the same stardom and promise as David Clifford
Jordan Larmour primed for a season to remind everyone how good he is
Derry club win county final factfile games with extravagant set of jobs
Paul Scholes says Paul Pogba is a "daydreamer" and Fred and McTominay are "limited footballers"
Shane Walsh: 'That's not how I was coached to play football. No one was coached to play football that way'
Galway fans' frosty reception for Davy Fitz doesn't make any sense
You may also like
2 days ago
"Where Johnny Sexton is so important to us now is being able to pass the baton"
2 days ago
"I'd love to finish on home soil but I can't see it. I won't be playing in the next Six Nations"
3 days ago
Ireland star Will Connors on his rude awakening playing GAA in KIldare
4 days ago
Andy Farrell's Ireland squad for November internationals to feature some exciting talents
4 days ago
Picking Ireland's best back row as multiple candidates hit early form
5 days ago
Caoimhín Kelleher could carve out a career at Liverpool
Next Page