A chilling insight to life in locked-down Italy from two Irish rugby stars.

When the Covid-19 (Coronavirus) outbreak occurred in Wuhan, China, most of us looked on with a huge amount of sympathy while hoping against hope - and telling ourselves - that it would not cross our door-steps. Today, we are barely able to go beyond our door-steps.

Just over 11 weeks after the first Coronavirus case was confirmed, the virus spread has been confirmed by the World Health Organisation as a pandemic and the death toll is rising rapidly each day. All major sporting events have been cancelled and while a few matches and bouts are going ahead, government bodies will soon step in to nix that.

Italy was the first European country to be overrun by the virus as it spread from community to community and raised an awful toll of illness and death. As part of the latest episode of Baz & Andrew's House of Rugby, we caught up with two Irish rugby stars who are in Italy during the government introduced lock-down.

Andrew Trimble and Pat McCarry spoke with Treviso and Italy outhalf Ian McKinley and Zebre head coach Michael Bradley [from 19:00 below] about life in a country trying to stem a terrible tide. 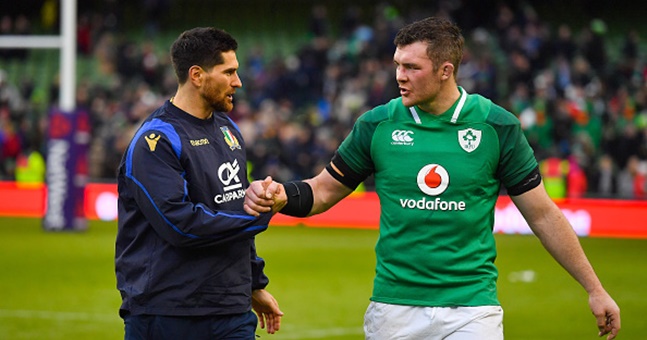 McKinley and his wife Cordelia are living in the Treviso area and opted to stay in Italy because, as the former Leinster outhalf explains, 'it has been our home for the past 10 years'.

He speaks of how people from every country needs to listen to the medical advice offered by experts and how, to his mind, the Italian government are doing all they can to delay a mass outbreak while trying to curb panic and despondency.

END_OF_DOCUMENT_TOKEN_TO_BE_REPLACED

Bradley, meanwhile, is thankful that many of his family are back in Ireland and he can only hope that our island nation is not struck as severely as Italy. He has not been happy with some people flouting recommendations against mass gatherings and social distancing.

On the recent four-day horse-racing festival at Cheltenham, he says:

"I was really disappointed that Cheltenham went ahead because of the Irish connection there. It was beyond belief to actually happen.

"I watched some of the event and I thought, ‘Gosh, there’s people dying over here and a group of people over there are enjoying themselves’ – inverted commas – but they could cause a big problem for the Irish population and even the population in the UK in a couple of weeks’ time, with the rate this thing kicks off.

"So that would have been my view. I see there that the schools obviously closed on Friday and the colleges. My two brothers are involved in the bar business so both their premises are closed now, which is good. I think we have to be very careful, you know."

Bradley is understandably concerned for vulnerable and elderly members of society and has been in touch with his mother back in Cork to check on how she is going, and if she is following all the expert advice.

"Socialising really needs to be curtailed at the moment, just for a period for two or three weeks," he adds, "which is the learning process in terms of China and hopefully that will help a lot."