Fantastic news out of the IRFU today

Hot on the heels of our team beating the world champions on Friday night comes even more good news for women's rugby in Ireland.

This afternoon the IRFU announced that they plan to bid for the 2017 Women's World Cup. The plan would be to host the tournament in August 2017, with Dublin and Belfast the two cities where he games would be played. Limerick has long been touted as a potential host city for the 2017 event but it seems that the two capitals on the island will be the hosts. 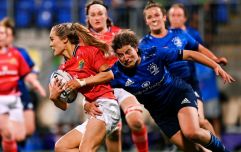 END_OF_DOCUMENT_TOKEN_TO_BE_REPLACED

The Pool stages would be held at UCD in Dublin before the semis and final move to Belfast, with games at Queens University and Kingspan Stadium (Ravenhill in old money).

The last tournament was held in France in 2014 but World Rugby want to move away from clashing with the summer Olympics so the next tournament will be held in 2017 and every four years afterwards.

Just a few months ago Fiona Coghlan told us that she believed Ireland should try to host the 2017 tournament and now that hope is a distinct possibility.

At the bid launch, Coghlan said: "I am delighted to be part of this ambitious bid to bring one of the world's premier women's sporting events to Ireland. The development and profile of women's sport has been fantastic in recent years and it will be a great opportunity for Ireland to showcase sport and to get more women and girls to consider taking up a team sport. 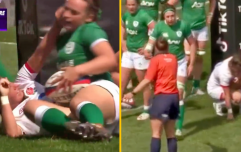 England scrumhalf gets away with clear strike on Ireland's Michelle Claffey

END_OF_DOCUMENT_TOKEN_TO_BE_REPLACED

"Having Captained Ireland at the recent Women's Rugby World Cup in France I hope that I can help the Irish Rugby to develop a Rugby World Cup that tops everything that went before and I know that the Irish people, Irish business and the Irish media will all come together to deliver a tournament to remember."

"We hope that the growing interest in women's rugby in Ireland, world leading facilities at UCD, Queens University Sport, Kingspan Stadium and our internationally recognised reputation for being one of the world's most welcoming nations will make an Irish bid the standout submission for the 2017 tournament."

The World Rugby Council will decide on the succesful bid in May this year.


popular
Boris Johnson slams Jurgen Klopp for defending Liverpool fans booing national anthem
Gearoid Hegarty's harsh red card leads to a heated debate in The Sunday Game studio
French media rave about Caelan Doris and 'Playstation rugby' from Leinster
QUIZ: You have 60 seconds to answer one Premier League goalkeeper question
Erik ten Hag criticised after 'tone deaf' Marc Overmars comment
QUIZ: Can you name these 26 Premier League winners?
Phil Bardsley in heated tunnel exchange after controversial penalty
You may also like
1 month ago
Ireland shown no mercy by ruthless France side on tough day in Toulouse
2 months ago
"It was only the training kit!" - Cliodhna Moloney stung with England gear question
2 months ago
"Devastated" Cliodhna Moloney on decision to leave her out of Ireland's Six Nations squad
2 months ago
The two questions we got to ask the IRFU about the women's rugby review
2 months ago
Full independent report into Ireland's failure to qualify for World Cup will not be published
2 months ago
"Imagine what that could do for women's rugby" - Stacey Flood has a plan worth hearing
Next Page