Ireland lost four players to injury during their 10-9 loss to France today.

Post-match, Schmidt delivered the news on his walking/lying wounded. It was not good for the first two players to be called ashore. Schmidt said:

"We lost Dave Kearney in one of those [late hit] incidents and he's done his AC [shoulder joint]. He is going to be out for a long time....

"We feared it might have been [Sean's] knee because of how he planted it, and turned, but it looks like an upper hamstring injury. Again, losing him in the match... he had trained really well in the week and was highly motivated for this game.

"He's always a loss when you lose him because of the power he brings, and the high work-rate, his carries and such. That [injury] was disappointing."

O'Brien was set to be completely off his feet and immobilised after the game and, like Kearney, his championship appears to be over. 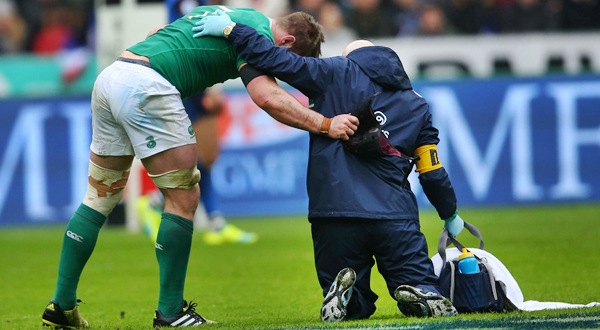 Schmidt also revealed that centre Jared Payne had to play the remaining half hour of the match after copping a dead leg and having no-one, bar Eoin Reddan, to replace him. He added:

"Johnny, again, he knows what he is going to get when he plays here and he was prepared for it. Still, he was pretty knocked around at the end of the game.

"I haven't had a chance to talk to the medics but Mike certainly appears to have a concussion. He will now have to follow some protocols on the back of that.

"I'm hopeful everyone else will be okay for two weeks' time."

Schmidt would be forgiven for giving his battered players an entire week off after a rough-house start.