Ireland may need to win another Grand Slam to claim World No.1 spot

The USA head coach and captain were the latest to lavish praise upon Ireland.

US Eagles captain Blaine Scully declared, on Saturday, that Ireland are 'the best team in the world'.

Head coach Gary Gold said this was the best Irish team he had ever seen, and it was hard to argue. Ireland had retained only Garry Ringrose in their starting XV, from last week's win over New Zealand, and they still managed to beat the USA 57-14.

This was a team that arrived in Dublin for their final Test of an unbeaten year in international rugby, and one in which they had defeated Scotland and Samoa. They ran Ireland close in the first half too, but they shipped five tries after the break and were well beaten. 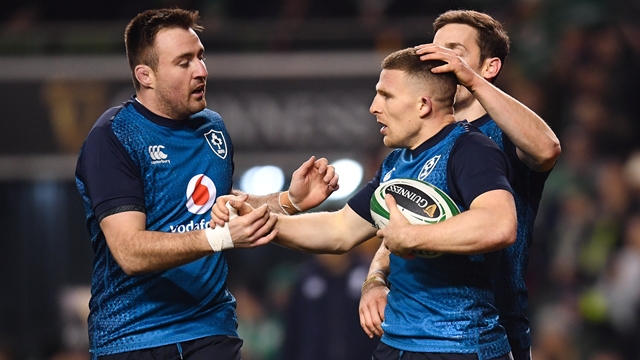 The 43-point win offered a chance for the likes of Andrew Conway, Tadhg Beirne and more to show they are ready for a Six Nations dart. The result does nothing for Ireland in terms of world rankings. Indeed, the USA climbed one place after their heavy defeat, due to Georgia beating Tonga.

Ireland remain in second, on 91.17 points. They are still 1.37 points behind New Zealand, who are also unmoved in terms of points despite trouncing Italy 66-3.

That means the All Blacks will begin 2019 as world number one (92.54 points). It also means that Ireland have their work cut out to leapfrog the reigning world champions.

The most points Ireland can make up, during the Six Nations, will not come until their final game of the championship - away to Wales at the Millennium Stadium. Given Wales' clean sweep of their November internationals, that game could also serve as a title decider.

The following are Ireland's upcoming Six Nations features and, given the current rankings, the maximum points (winning by more than 15) they could possibly pick up:

END_OF_DOCUMENT_TOKEN_TO_BE_REPLACED

Given Wales' decent ranking, the fact that the game is away from home and that Ireland lost the corresponding 2017 Six Nations fixture, there are a heft of rankings points on offer if Ireland can get the job done.

Interesting, as much as Ireland will be focusing on New Zealand, a heavy defeat in their Six Nations opener would be sobering for more reasons than one.

Were Eddie Jones' men to beat Ireland by more than 15 points, they would then leap to second in the world and relegate Ireland to third.

Getting close to the All Blacks' heels has required a supreme effort from Ireland. Getting past them could prove much, much tougher.

It will most likely take back-to-back Grand Slams to reach that summit.


popular
"Conor Murray was hung out to dry"
Kilkenny youngster pulls off the no-look hand-pass once more
"Ireland don't ever do anything different and that's the worry" - Mike Tindall
Tyson Fury reveals what happened when he sparred Anthony Joshua
Tyson Fury's official purse for Deontay Wilder fight revealed
Jacob Stockdale and Johnny Sexton not spared by English press
Conor McGregor prepared to risk it all on next fight
You may also like
2 days ago
Baz & Andrew's House Of Rugby - Twickenham carnage
3 days ago
"Next thing, all I see is this 'BANG' coming in over me... It was O'Driscoll"
4 days ago
"Emotions will be charged" - Sean O'Brien backing Ireland for Triple Crown
6 days ago
Baz & Andrew's House of Rugby - Live in Dublin with Scott Fardy and Fiona Coghlan
1 week ago
Baz & Andrew's House of Rugby - BOD and Andrew Conway
1 week ago
These three men have proved a point but are far from done
Next Page