Ireland team that needs to start against Italy, and win big

"We did a good job to get back and give ourselves a chance."

As Dan Sheehan pointed out, on Saturday night at Stade de France, many in this Ireland team are not too experienced with chasing back from 10-0 and 22-7 deficits.

That was where Ireland found themselves, twice, against an impressive French side. The only thing keeping Ireland's pulse turning over, for about 45 minutes was Mack Hansen's opportunistic try from a Joey Carbery restart.

END_OF_DOCUMENT_TOKEN_TO_BE_REPLACED

The second real spark Ireland needed was provided by Josh van der Flier as he crashed over to score off a rolling maul. Five minutes later and when Paul Willemse was stepped by Jamison Gibson-Park on his way to the tryline, Ireland were right back in it.

That was as close as Andy Farrell's men got. Cyril Baille boshed his way over for a try, on 54 minutes, that put Ireland at arm's length again. Joey Carbery and Melvyn Jaminet traded penalties but there was enough drama in the final 10 minutes to mean whatever side finished on the losing side would be left with stinging regrets.

At the end, Ireland had those regrets. Sheehan's try-saving tackle on Jaminet ensured Ireland at least got a losing bonus point. France are away to Scotland, in round three, while Ireland host Italy a day later. They will be targeting a 30+ point victory to keep the pressure up on Les Bleus. 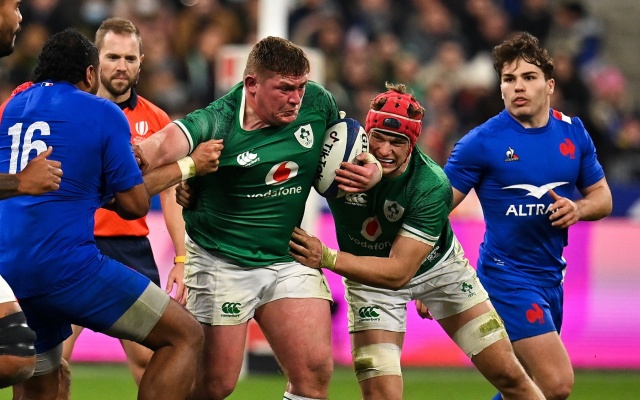 Tadhg Furlong of Ireland is tackled by Peato Mauvaka of France. (Photo by Seb Daly/Sportsfile)

Four changes to our Ireland team to face Italy

END_OF_DOCUMENT_TOKEN_TO_BE_REPLACED

Given that it would be February 12 until March 12 between the round two and four games against France and Italy, Andy Farrell will not make sweeping changes for the visit of Italy.

We would be of a similar mind. Our changes include getting Robbie Henshaw and Iain Henderson championship starts, one on the wing and one in the back row.

END_OF_DOCUMENT_TOKEN_TO_BE_REPLACED

We would like to see Tadhg Beirne have another go at blindside, and give Caelan Doris a run out in the No.8 jersey. Gavin Coombes is another option here, but we don't want to change too much so he is in reserve [just ahead of Nick Timoney].

Beirne moving to No.6, opens up a space in the second row and that is where Henderson comes in. We are giving Joey Carbery another start with Jamison Gibson-Park, so James Ryan stays on as captain. If Johnny Sexton is fit, though, try hold him back!

Robert Baloucoune gets the No.14 jersey for this one, with Andrew Conway dropping out. On the bench, Dave Kilcoyne, Ryan Baird, Craig Casey and James Hume would all be very handy against Italy in the final 30.

The only other switch is minor, with Dan Sheehan starting and Rob Herring coming in as bench cover.

You may also like
3 days ago
Stormers' Hacjivah Dayimani still celebrating URC triumph in full kit, four days later
3 days ago
"Brave" Harry Byrne backed to lay down World Cup marker in New Zealand
4 days ago
"It's pathetic!" - Romain Ntamack defended after changing room footage criticised
4 days ago
"I just remember the room erupting!" - Nick McCarthy on coming out to his Leinster teammates
4 days ago
Danny Care and Billy Vunipola make 36-man England squad for Australia
6 days ago
"I was never supposed to be here" - Emotional Ellis Genge reflects on Leicester's league triumph
Next Page