A bedraggled Ireland put in their worst performance in recent memory to lose to a brave Spanish side. The result seriously damages our World Cup hopes and our Ireland player ratings are not a pretty read.

Ireland got off to a ropey start at Stadio Sergio Lanfranchi as the Spanish bossed it at the scrum and won a couple of breakdown penalties. They went 3-0 ahead and should have been 6-0 clear before Ireland answered back through Beibhinn Parsons.

The high point for @IrishRugby Women in the first half against Spainpic.twitter.com/PfWnahYdnS

END_OF_DOCUMENT_TOKEN_TO_BE_REPLACED

Stacey Flood, who looked sharp in attack, made the conversion but that was as good as it got for the first half. Cliodhna Moloney got closest to another Irish try but was held up. HALF-TIME: Ireland 7-3 Spain

Ireland thought they had scored a second try after less than a minute of the second half, but the T.M.O spotted a Kathryn Dane knock-on and Amee Leigh Murpht-Crowe's effort was chalked off.

That sloppiness was punished after an extended period of Spanish pressure when Ireland conceded a 73rd minute try that put their World Cup hopes on the rocks. Enya Breen had a late chance to snatch the win back for Ireland but her penalty didn't have the legs.

Defeat, then, and only wins over Scotland and Italy in the coming days will give them any hope of reaching next year's World Cup.

END_OF_DOCUMENT_TOKEN_TO_BE_REPLACED

Dropped an easy high ball, but business picked up soon after. Showed up well in defence and landed one peach of a 50/22 kick to touch. Gambled on an intercept but could not prevent Spain's try.

Did well in defence, with Considine, to scupper a Spain try after facing a 3-on-2. Showed nice foot-work in attack. Best back on show.

END_OF_DOCUMENT_TOKEN_TO_BE_REPLACED

Showed up more in defence than attack, but an encouraging debut. Will be disappointed with a sloppy knock-on at the start of the first half.

Her lusty tackles slowed Spanish momentum on more than one occasion. Had a second half knock-on but was on the receiving end of a tough pass.

Got off to a dream start with a great try, flying up the left wing and stepping her marker. Was bottled up well after that but Griffin should have put away for a second. Made another couple of strong carries and attracted two and three defenders on each carry. One poor knock-on and was penalised - quite harshly - for holding on. Another knock-on, after 52 minutes, when given a flying offload to handle.

Great to have an outhalf with such attacking intent, and weapons. A nice couple of skip passes and nicely weighted balls. Kicked well out of hand too.

Left-to-right passing lacked a bit of fizz, but was always probing and feeding the big carriers. Will be gutted that her knock-on cost Murphy-Crowe a try. One lovely dink over the top had Spain in all sorts of bother. 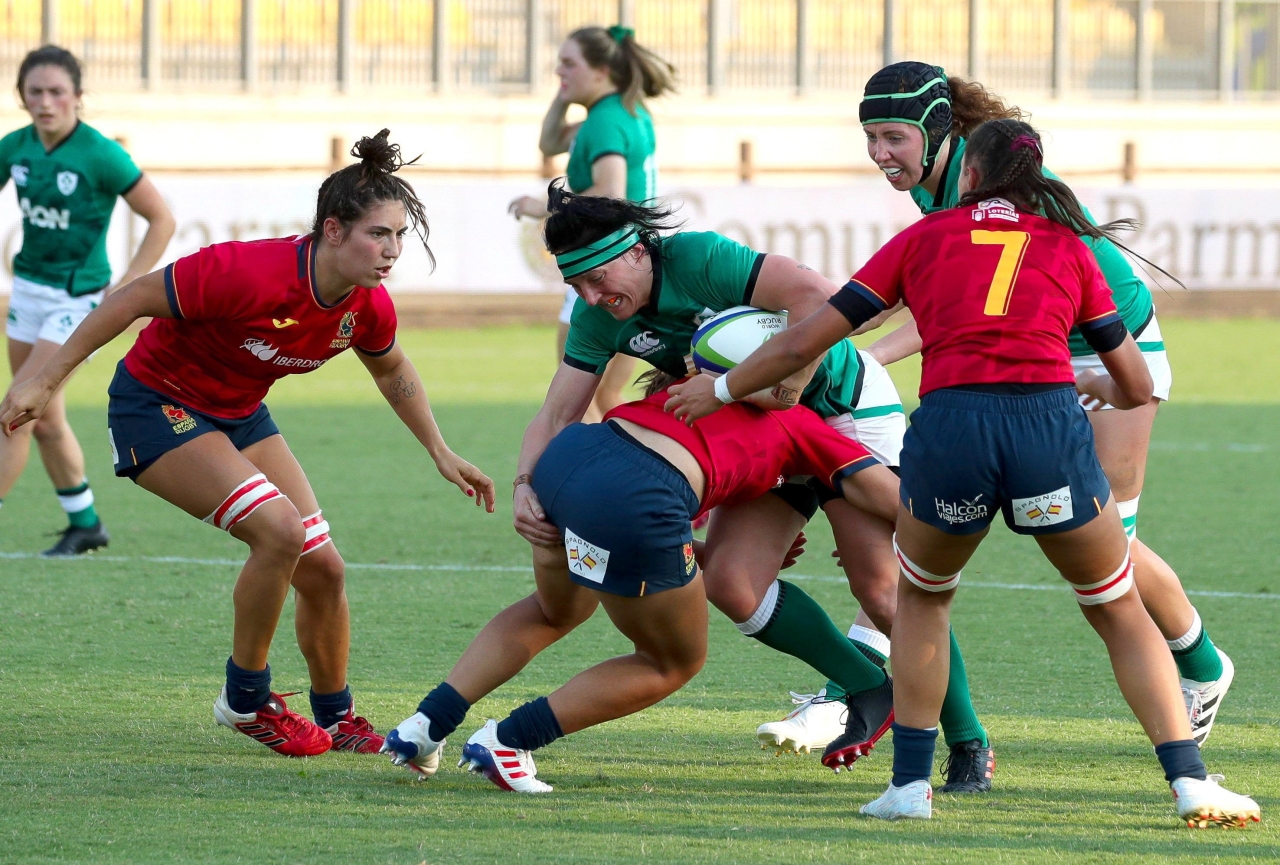 Made on monstrous carry in the first half that sent a Spanish lock flying. Did not have a great day at the scrum, which was worrying. Penalised for not releasing after one second half carry. Carelessly repeated the dose, 10 minutes later

A very good player, but one that had a bad day. The front row was up against it all evening and her lineout throwing struggled under pressure. Did make one crucial turnover and was close to a try before being held up.

Made one poach at the breakdown that was the highlight - as well as a couple of big carries in the Spain 22 - but it was a testing day at the scrum.

Jumped well in the lineout on a couple of occasions when Ireland got it right. Tidy enough without tearing up trees.

A lineout beacon for Ireland. Jumped well and carried strongly. Kept going until the end.

Ireland's best forward on show, and delivered plenty of front-foot ball. Lovely hands and carries that made an impact.

Made some bruising carries that set the Spanish back and gained her team some momentum. Should have passed to Wall but tried an ambitious offload to Parsons and the chance was lost.

Has yet to lock down that No.8 jersey and has not done so with this performance. Decent enough, but lacking punch or big moments.

Was drafted in to try change momentum and freshen up the pack.

Had little impact in attack.

Was sharp with one take from a stray Spanish lineout.

Replaced the centre, late on.


popular
"Some of the generals wanted me executed" - Irish rugby legend on flag caper that went wrong
"Johnno went, 'We’re not moving! You're trying to mess us about!'" - Ben Kay recalls red carpet controversy
Rio Ferdinand claims that Cristiano Ronaldo should have been told to 'sit down' against Young Boys
Garry Ringrose challenges "pretty ridiculous" changing conditions for women's players
It won't mean much but Pat Spillane's compliment to Mayo and to Lee Keegan says it all
Peter Keane's future as Kerry manager in doubt after strange statement
Neil McGee hasn't worked in eight weeks after back injury but still won't rule out championship return
You may also like
20 hours ago
Katie McCabe believes that equal pay deal with FAI "doesn’t add pressure"
2 days ago
Clinton Morrison shares advice Roy Keane gave him on morning before Saipan showdown
1 week ago
Ireland's best XI under Stephen Kenny starting to take shape
1 week ago
Serbian media react to 'True Football Tragedy' and hail "amazing" Gavin Bazunu
1 week ago
"I was already taking my jersey off!" - Andrew Omobamidele's post-match interview was so pure
1 week ago
Gavin Bazunu, Andrew Omobamidele and a glimpse of better days ahead
Next Page