‘I swear, we’re going to f*** them up today!' - Beating the Boks in their own back yard

"That was from a South African, talking about us doing that to the Springboks. I was like, 'He is MASSIVELY up for this game!'"

Four years ago, heading into this summer, Joe Schmidt took an injury-hit Ireland squad to South Africa and created history. Playing with 14 men for most of a game in Cape Town, Ireland stunned the Springboks.

END_OF_DOCUMENT_TOKEN_TO_BE_REPLACED

The tourist's 26-10 victory, against a South Africa side that contained nine of the starting XV from their 2019 World Cup final triumph, was gripping from start to finish and saw so many Irish players take their performance levels to a higher plane.

Andrew Trimble, who packed down as an emergency flanker after CJ Stander's red card, and Ultan Dillane were both on the pitch as the final whistle sounded at Newlands.

Dillane joined Trimble and Barry Murphy for the latest episode of Baz & Andrew's House of Rugby and was only too happy to reminisce about a famous win that would not be eclipsed for all of... five months.

END_OF_DOCUMENT_TOKEN_TO_BE_REPLACED

Under Schmidt, Ireland had claimed the 2014 and 2015 Six Nations titles but they had finished third in the table after two wins, a draw with Wales and defeats to France and eventual champions England.

While Connacht defeated Leinster in the Guinness PRO12 final, and Ulster reached the last four, Munster had a poor season and had barely scraped into Europe for the following season. Added to that, Schmidt was without Johnny Sexton, Peter O'Mahony, Rob Kearney and Sean O'Brien for the tour.

There were a few more Connacht heads in the squad than usual but their inclusions were fully merited after their league-winning season. Dillane, who had helped Connacht to that PRO12 win, recalls a conversation he had with Ireland captain Rory Best a couple of weeks before the first Test.

"I just remember Besty, before the tour. We had to do media in Dublin and he brought me to one side and said, ‘Aw, man, if we win one Test in South Africa, Cape Town, we’ll lose our minds!’ And the motivation just flowed through me to do my best to win for the team. That was some game."

END_OF_DOCUMENT_TOKEN_TO_BE_REPLACED

A lot of the focus, leading into the First Test, was on Munster back-row CJ Stander starting for his adopted country back in his homeland.

Trimble recalls meeting Jannie Stander, CJ's father, on the morning of the game and how fired up he was for his son, and his Irish teammates, to make their mark. He comments:

"Whatever about, Ultan, how up for the game we were, CJ’s dad was up for the game! I bumped into him in reception, and CJ introduced me. And his dad goes, ‘I swear, we’re going to f*** them up today!'

"And that's from a South African, talking about us doing that to the Springboks. I was like, ‘He is massively up for this game!’"

Stander was selected at blindside for the game and started well but, with Ireland leading 10-3 after 22 minutes, he was shown a straight card for clattering into Boks outhalf Pat Lambie.

Lambie was sparked out after taking Stander's hip to his chin and was placed in a neck-brace and onto a stretcher before he was carted from the field. Stander, who had been booed off, went to the medic's room almost immediately to check on Lambie's condition.

Murphy took Trimble and Dillane through the next 22 minutes of the match as they were so crucial in Ireland's win.

DILLANE: That was some game. There was 13 men, wasn’t it? CJ got that unfortunate…

MURPHY: Yeah, it was 13 men. For the last 10 minutes of the first half you were down to 13 men (Robbie Henshaw was sin-binned). Not only did they not score for that 10 minutes, but Ireland scored a drop goal. And then, two minutes into the second half, Conor Murray scored. That was a huge moment for me. Trimby, do you think that was that a big moment for ye to come out of that difficult 15-minute patch?

TRIIMBLE: Yeah, yeah. I think, watching it back, CJ’s red was, by 2020 standards, it probably looks slightly redder. At the time, I was probably thinking, ‘I don’t know about that’, because he was in the air and obviously he can’t change his body position. But Pat Lambie kicked it and then (CJ) took off, targeting his chin with his hip.

TRIMBLE: He burst him.

DILLANE: Rough. And the crowd… the crowd turned so bad on CJ. It was awful to watch.

TRIMBLE: It was sad for CJ because it was a big moment for him, obviously, playing South Africa.

As Murphy noted, Lambie took several months to recover from such a heavy KO blow. He missed the remainder of the series against Ireland but returned in October 2016 to play for the Springboks. He suffered further concussions in 2017 and, after a sustained spell on the sidelines, announced his retirement, at the age of 28, in January 2019.

Murray's try was converted by Paddy Jackson, who slotted over a 67th minute penalty only to throw an intercept to Pieter-Steph du Toit. The rangy flanker scored under the posts and Ireland led 23-20 with just over 10 minutes to go.

Ireland were grateful to Springbok sub Julian Redelinghuys when he conceded his second sloppy penalty, on 76 minutes, and Jackson extended their lead to 26-10. 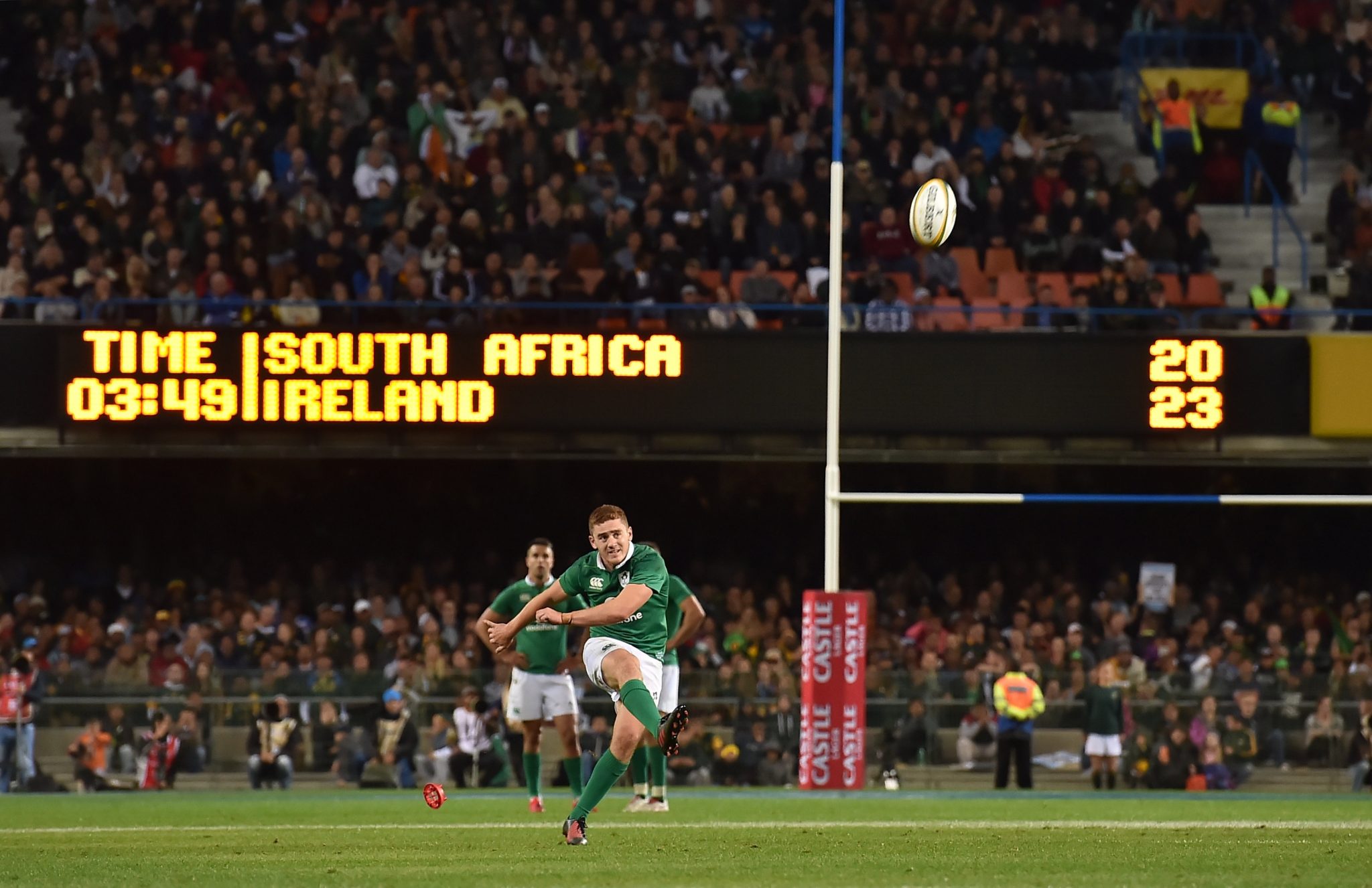 Still, the South Africans knew a converted try would snatch victory from the jaws of defeat. The Irish players had emptied the tank but were still able to scramble and stick tackles in the tense closing stages.

"The last play was huge, as well," says Dillane. "JP Pietersen getting tackled into touch by three of us."

"What was he doing, to be fair?" asked Murphy. "He should’ve scored that. It was the strangest corner flag attempt to finish I've ever seen. He could have just dived into the corner but he aimed at a player and tried to bowl him over with the ball. That's because ye rattled them. You had them rattled early."

There were TV replays but each one, as it played out on the big screens, confirmed to the Irish players that they had beaten South Africa on home turf.

That historic achievement would be mirrored (though most would say surpassed) when Ireland beat the All Blacks for the first time ever, at Soldier Field, later that same year.

1-0 up in a three-game series, Ireland were flying and they should have clinched it but for a super-sub who liked to call himself 'The Punisher'. That, though, is a tale for another day.


popular
Andy Farrell goes for Munster veterans as Ireland team to face New Zealand named
The four stone-cold certainties for All-Stars even as early as this
"The economy was one of the big reasons" - Cadogan's move from an electrician to personal training
Eamon McGee just couldn't help himself with Armagh-melee tweet
"He's actually smiling putting the ball over the bar. He should nearly be fainting." - Ryall on Limerick's legacy
Kylian Mbappe reportedly wants PSG to sell Neymar
Gavin Coombes one of four Irish players to push themselves into Test picture
You may also like
19 hours ago
Gavin Coombes one of four Irish players to push themselves into Test picture
21 hours ago
Bundee Aki understandably emotional, as Ireland pay moving tribute to late Sean Wainui
22 hours ago
Full Ireland player ratings after Maori All Blacks teach us an early lesson
1 day ago
"We could lose all five games" - Darren Cave with a rare take on Ireland's chances
1 day ago
Mike Lowry and Peter O'Mahony in First Test contention as Ireland shuffle deck
2 days ago
"Significant" knee injury ends Iain Henderson's tour of New Zealand
Next Page