The great un-utterable has been uttered.

Ireland are heading into the Six Nations in top form, seeking their eighth consecutive win and as second favourites to claim their third championship in five years.

Eddie Jones has been doing his best to talk England down and do the opposite with Scotland and Ireland. We are well used to the Aussie's mind games at this stage and the injury crisis he dwelt on, in recent weeks, looks to be abating. Surprise, surprise.

END_OF_DOCUMENT_TOKEN_TO_BE_REPLACED

Billy Vunipola and Elliot Daly will be big losses, all the same, but England have one hell of a stacked deck to choose from. England are champions, are on a six-game winning streak and are being heavily backed into this campaign.

Reading all the previews and predictions of the 2018 Six Nations, one would swear this was a two-horse race. Ireland versus England on the final afternoon with a championship on the line and a decent possibility of both sides still being in the Grand Slam hunt.

In Ireland, were you to scan the various media outlets, you will find Joe Schmidt's men heavily tipped to reclaim the title they last won in 2015. A couple of columnists and pundits are going with England but the dye has been cast and it is considerably green. 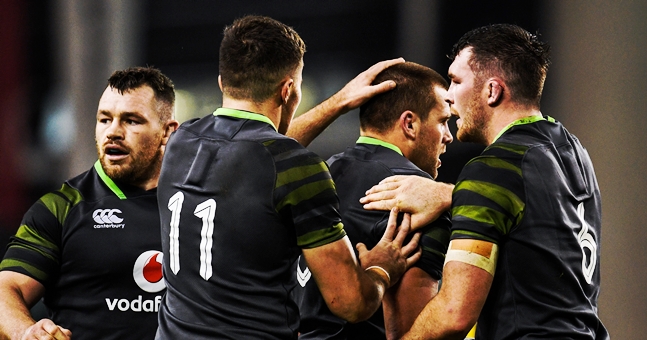 END_OF_DOCUMENT_TOKEN_TO_BE_REPLACED

Elsewhere, among the other nations, it is an even shake between Ireland and England. One article caught out eye, on ESPNscrum, and it has filled us with a mix of giddy excitement and downright fear.

While Tom Hamilton has tipped England to 'just about sneak over the line for a Grand Slam', there is a counter declaration from fellow writer Cillian O Conchuir. For his tournament predictions, he proclaims:

'It's got to be a first Six Nations Grand Slam for Joe Schmidt's team. He has the quality, the strength-in-depth and the luck with injuries that could see Warren Gatland's Wales and Eddie Jones' England suffer.'

Schmidt may argue that he has been deprived of 13 international players but the major losses count at four - Jared Payne, Jamie Heaslip, Sean O'Brien and Garry Ringrose. The decision to exclude Tadhg Beirne and Simon Zebo is self-inflicted but with a view to Ireland keep its best players on these shores.

Elsewhere, as the 2018 edition of rugby's oldest international tournament nears, here are some of the stand-out predictions.

SHANE WILLIAMS: "England are the side to beat again."

WILL GREENWOOD: The former England centre believes Ireland could still claim the title despite losing their final game to England at Twickenham.

PLANET RUGBY: 'There is no reason why Ireland cannot go to Twickenham and upset the apple-cart in the final game.'

ROBERT KITSON:The Guardian scribe believes Ireland will finish ahead of England, with Scotland in third.

As for me, representing SportsJOE, here are my predictions for the final table.

So there we have it.

Apologies to Wales, Scotland, Italy and France. Those four nations will know what a winning start and momentum can do for a championship campaign but all the signs, and experts, are pointing to a Twickenham decider on March 17.


popular
"I remember just hugging this Irish guy" - How one Kiwi rugby star reacted to Ireland's historic series win
Mario Balotelli, Luis Suarez, Fernando Torres and why Rio Ferdinand "hated them"
"I don’t trust you" - Joey Barton delivers brutal dismissal of Irish defender
Down county football is in tatters, but Conor Laverty is the man to piece it back together
"I'll ask for everyone that comes to the game to wear purple and roots for us" - Pat Fitzgerald
Gatecrashed interviews and chip-shop previews - Wexford GAA's online coverage sets the standard
Javier Hernandez offers to play for Manchester United for free
You may also like
1 week ago
“My confidence was on the deck" - Aaron Connolly explains why he has made the move to Italy
2 weeks ago
Every Irish transfer in football, this summer, as several big deals get done
2 weeks ago
Six Irish players make damn impressive 'World XV' that would take some beating
3 weeks ago
The frontrunners for Ireland's 33-man squad for the 2023 World Cup
3 weeks ago
All Blacks media manager explains why Ian Foster appearance was cancelled after Ireland defeat
3 weeks ago
Warren Gatland selects nine Irish players in his strongest Lions XV, right now
Next Page