Ireland Sevens men's side reached their first ever World Series final, at the fifth time of asking, after defeating hosts France at the Toulouse Sevens tournament.

It was a moment of triumph for the Irishmen, but Esteban Capilla shoved Ireland captain Billy Dardis just as the final whistle blew and there was a shemozzle on the pitch.

Ireland hit the front through the electric Terry Kennedy and went 12-0 ahead when Mark Roche was quickest to react when France could not handle a grubber kick. 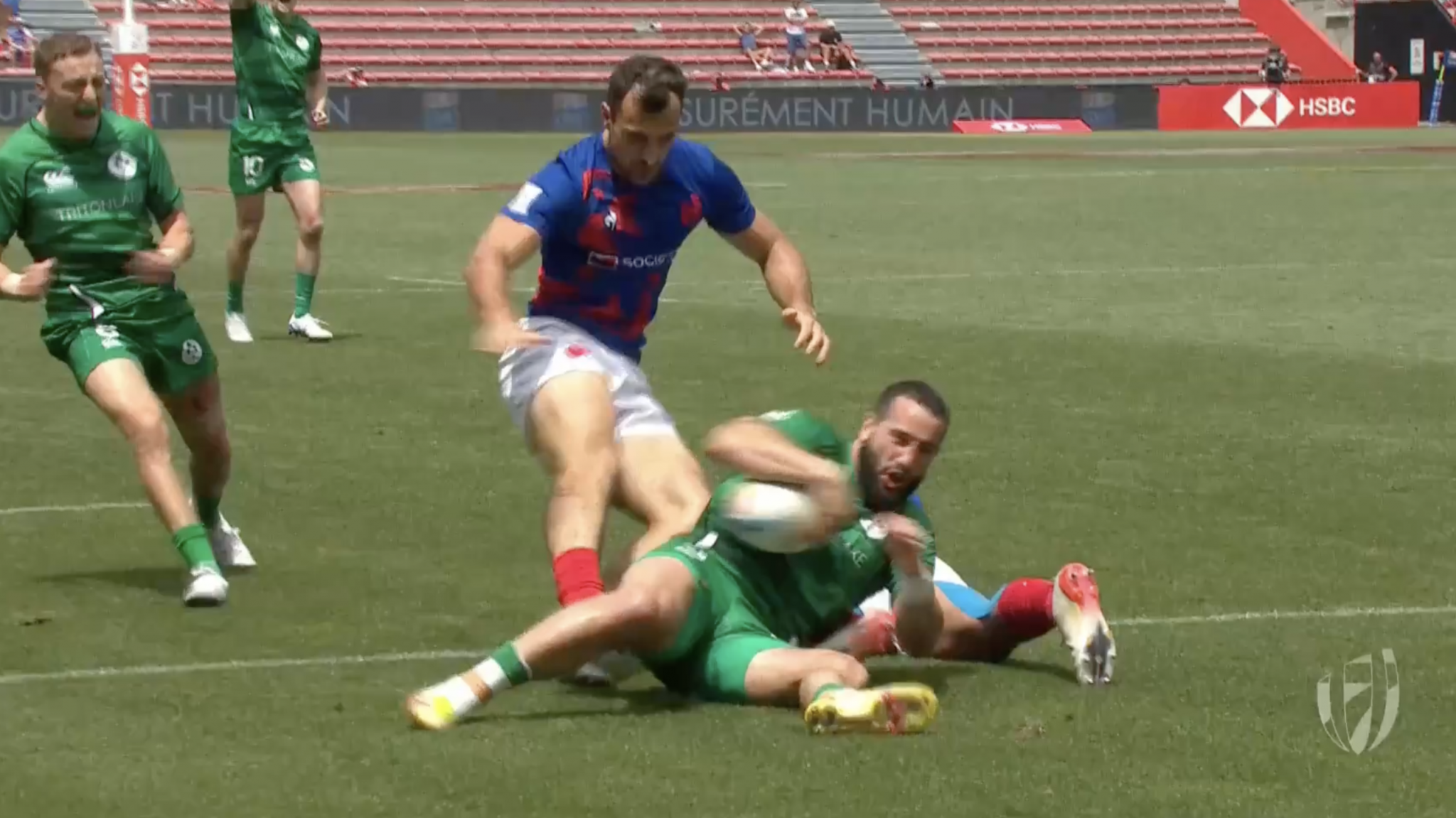 France answered back through Nisie Huyard after a blistering midfield break left two Irish defenders for dust. That made it 12-7 but Ireland led at the break.

END_OF_DOCUMENT_TOKEN_TO_BE_REPLACED

A France yellow card put them on the back-foot, early in the second half, and Terry Kennedy got over for his second try of the game, and 38th of the series so far. That score came after a great Andrew Smith break.

It was Smith that put the seal on victory for Ireland Sevens after a fantastic steal at the breakdown opened up a gap in the French defence.

Andrew Smith wraps things up with a superb finish to send @IrishRugby through to the final ☘️
#HSBC7s | #France7s pic.twitter.com/wpLYaEzoem

END_OF_DOCUMENT_TOKEN_TO_BE_REPLACED

With time running out, the Irish defence shut down all French attacks. Ireland won late penalty and kicked to touch, then won the throw and Billy Dardis scampered back down the sideline as the clock passed 0:00 before he booted the ball out.

With the home fans booing the conservative Irish approach, Esteban Capilla forcefully shoved Dardis to the ground, sparking a dust-up as the final whistle blew. 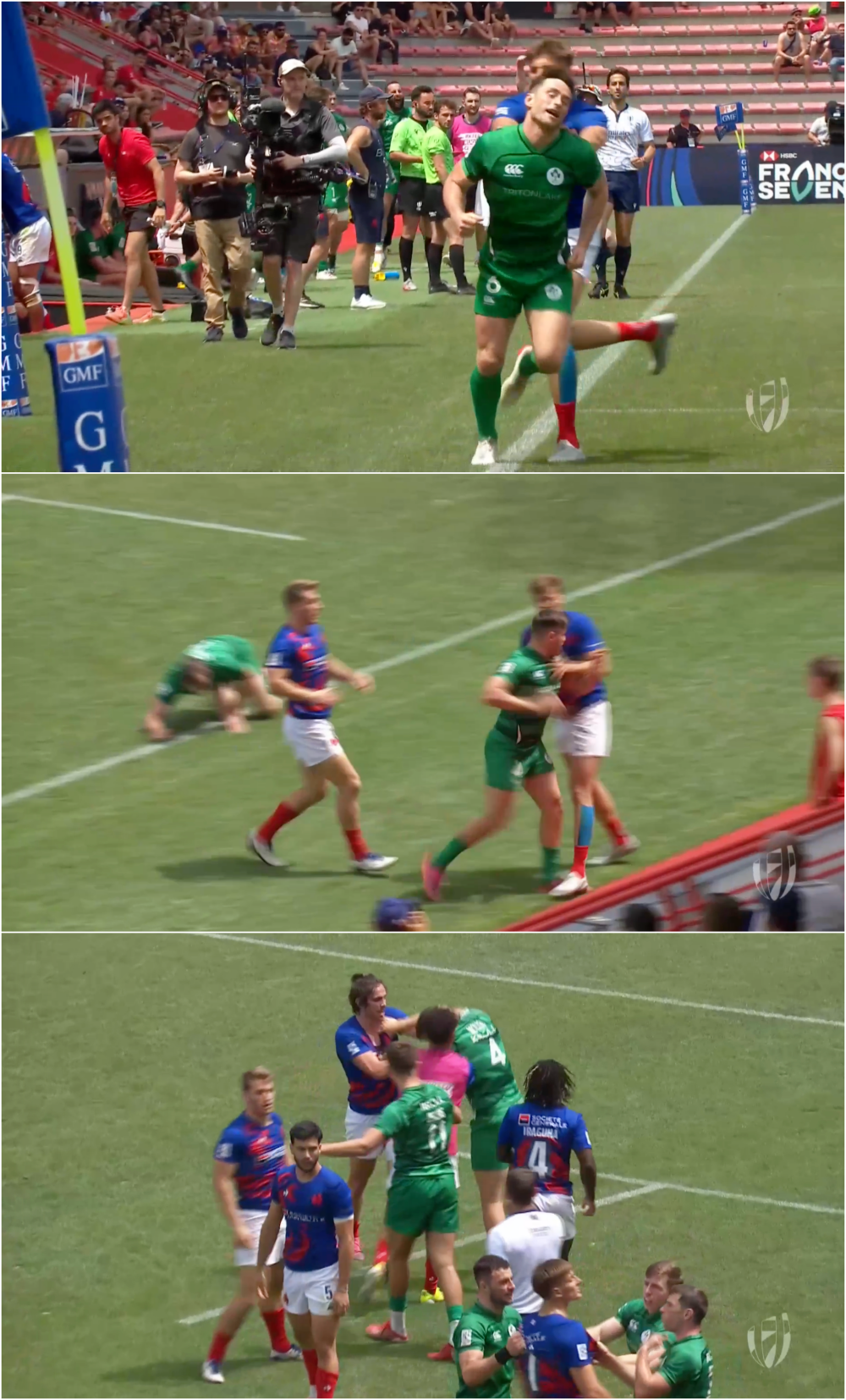 After officials settled both sets of players, the French did shake hands and all the aggro was forgotten. Ireland will face Fiji in the final [5:26pm Irish time]

"Over the moon," Mark Roche reflected on the 24-7 Ireland win. "The whole stadium was just rocking.. the boys just put it up to them and delighted to make our first final."

There was disappointment for Ireland Sevens Women as they lost their semi-final 40-7 to a flying Australian side. Ireland were well in the contest after a close first half but were blown away after the break, not helped by picking up two yellow cards.

UPDATE: Ireland lost the World Series Final 29-17 to Fiji, despite two tries from Jordan Conroy and one from Terry Kennedy.

You may also like
1 week ago
"Hopefully we'll come away with a gem" - Joe McCarthy potential sealed Ireland selection
1 week ago
Andy Farrell had an interesting take on Irish provinces being outmuscled in big games
1 week ago
Nathan Collins stuns Ukraine with goal sweeter than Michael Obafemi's
1 week ago
"I got sent the clip!" - Mack Hansen wasn't letting Greg O'Shea forget his Ireland comments
1 week ago
Ireland team Andy Farrell should start in First Test against the All Blacks
1 week ago
Five new faces in 40-man Ireland squad to tour New Zealand
Next Page