Ireland Sevens stars reached the semi finals of the Rugby World Cup Sevens, but they were defeated by two-time champions New Zealand in a pulsating last four encounter.

It took the reigning champions, New Zealand only 28 seconds to open the scoring. Ireland spilled a restart and never got the ball back until Ngahori McGarvey-Black cantered over and dotted down in the left-hand corner.

END_OF_DOCUMENT_TOKEN_TO_BE_REPLACED

The next restart was claimed but Ireland were bulled at the breakdown and the counter-ruck saw McGarvey-Black pick up the ball and blitz over for a second try in short succession. Both scores were unconverted, so Ireland trailed 10-0.

There was hope for Ireland, just before the break, as Moses Leo was yellow-carded for a cynical tackle, off the ball. Ireland took advantage with a hard-worked move that saw John Kelly score a try in the corner, which was also unconverted. 10-5 to the Kiwis at the break.

The second half saw Harry McNulty disrupt the New Zealanders at the restart and Andrew Smith pounce on a breaking ball to steam over. It was level at 10-10 when Billy Dardis missed his drop-kick conversion.

Restored to seven players, after Leo's sin-binning, the Kiwis were on the charge but some heroic defending from Ireland repelled them. They were put on the back-foot after a tough decision against Jordan Conroy for tackling a player before he gathered the ball. 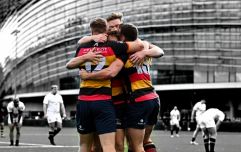 END_OF_DOCUMENT_TOKEN_TO_BE_REPLACED

It was a stout rear-guard action but it was that man McGarvey-Black that broke through for a hat-trick that made it 17-10 when it was converted from close range. There was still time for a late Ireland Sevens rally, but the Kiwi's counter-rucking closed the match out.

To reach the semi-finals, Ireland beat Portugal and England on the first day of the tournament, so knew they had a last eight match locked up. They had the whole day to wait for that quarter final, against hosts South Africa, and primed themselves for an upset against the Blitzbokke.

END_OF_DOCUMENT_TOKEN_TO_BE_REPLACED

The game was tied 7-7 at the break, but tries from Harry McNulty and Jordan Conroy (a brace) sealed a fantastic victory that teed them up against a highly-rated New Zealand side. The commentators called it, 'The mother of all upsets', and it certainly felt that way. 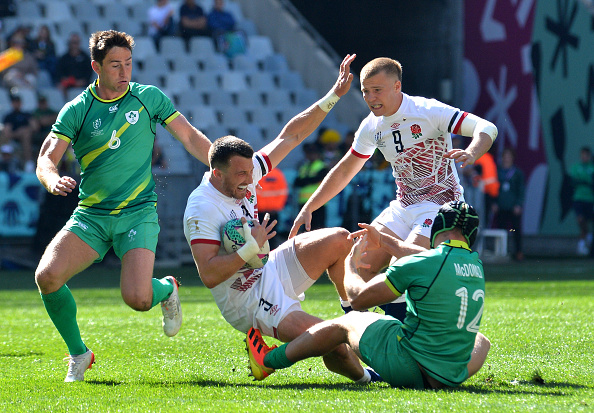 The tournament did not go as well for the Irish women, in Cape Town. They defeated Brazil in their 'Round of 16' match, on the opening day, but were comprehensive losers to New Zealand in the last eight.

They fell 28-0 to the Kiwis then lost 24-0 to Fiji. Their tournament closes out with a 7/8th place match against England, this afternoon.


popular
Peter O'Mahony riled by "petulant s**t" as Munster toasted by Dragons
Grim injury news for Seabelo Senatla after Bundee Aki's red card clear-out
The return of Paul Mannion and Jack McCaffrey proves that Pat Spillane is wrong about split season
The largely ignored reason Ireland rely on James McClean and Jeff Hendrick so much
The clear-cut differences between what Stephen Kenny and Dara O'Shea said, last night
The best and worst qualification groups Ireland could get for Euro 2024
Kevin Cassidy believes former teammate should be the next Donegal manager
You may also like
2 days ago
"That really shocked me" - Graham Rowntree laments Munster attack on day to forget
4 days ago
"When I talked to them, and asked their dreams, they said it was to play for Ireland" - Pat Lam on Connacht's uprising
4 days ago
Bundee Aki angrily confronts referee on-field after red card tackle
1 week ago
"Insane" Johnny Sexton has driven this Ireland team to a whole new level - Tommy Bowe
1 week ago
AJ MacGinty and a Pat Lam promise from that was kept, six years on
1 week ago
"He would have been a phenomenal rugby player" - Jack Carty on Michael Murphy
Next Page