Ireland look set to drop to third in the world when the latest world rugby rankings are updated on Monday.

Joe Schmidt's side climbed to second in the world last year after winning the Six Nations and a summer tour of Australia but have now fallen back to third after recent losses to England and Wales.

The latter, who sealed their first Grand Slam since 2012 with a 25-7 win over Ireland on Saturday, look set to leapfrog Ireland into second place with world champions New Zealand still holding on to the number one spot. 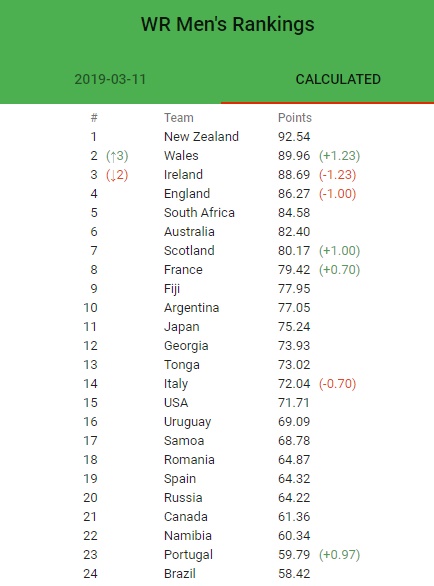 Meanwhile Ireland head coach Joe Schmidt said that his side's discipline let them down on Saturday and he also added that Ireland did not respond well to pressure at the Principality Stadium.

“I’m disappointed,” Schmidt said afterwards. “Our discipline doesn’t usually let us down, it allowed them to get a distance ahead of us, they scored after a couple of minutes and you’re always under a little bit of pressure and we didn’t respond overly well to that pressure giving up those penalties.

“We weren’t as good as Wales today. They were hugely emotionally up for it and I know because we were in the same position last year going to Twickenham and you get another 5%. It’s hard to match but you’ve got to be able to match it, there will be occasions like that in the future.”


popular
Rory O'Connor gets Wexford out of jail as Shanagher throws it back
Conor McGregor sends message to new UFC lightweight champion
Alisson gives moving post-match interview after scoring late winner for Liverpool
Burnley report Leeds' Ezgjan Alioski over gesture made towards Dwight McNeil
The SportsJOE 12 o'clock quiz | Day 352
QUIZ: Can you name these La Liga cult heroes?
'Stop, stop, STOP!' - Texas crowd left stunned as UFC legend has arm snapped
You may also like
4 days ago
Ronan O'Gara will never forget his first encounter with Jonah Lomu 'in his pomp'
6 days ago
Ireland confirm summer Tests, in Dublin, against USA and Japan
1 week ago
Performances against England saw Bundee Aki and Jack Conan become Lions
1 week ago
James Ryan and Iain Henderson may be fighting for one Lions spot
2 weeks ago
Tadhg Furlong declared 'single most important player for Lions touring party'
2 weeks ago
"It's going to be the biggest thing in this person's life, ever" - Rory Best reveals his Lions captain pick
Next Page