Ireland have a few ways of going up against the Scots, even without a couple of senior stars.

The time difference between Ireland and Japan means the squad updates, and unofficial murmurings, come through at all hours. You can be getting ready for bed when you see Robbie Henshaw is in danger of missing the entire tournament. Putting the breakfast bowls away when you hear Rob Kearney may miss the opener against Scotland.

END_OF_DOCUMENT_TOKEN_TO_BE_REPLACED

Ireland say Kearney's calf strain has not ruled him out of contention for Sunday's game. Should he miss out, however, we would expect Andrew Conway to cover fullback while Jordan Larmour would start on the right wing.

The positive news from Ireland camp is that Joey Carbery is back in full training. By the time Sunday rolls around, it will be six weeks from when Carbery damaged ankle ligaments in a warm-up win over Italy. It would be risky to place him on the bench, especially with the next game against Japan coming six days later.

The big call for Ireland coach Joe Schmidt would appear to be in midfield, with Robbie Henshaw now certain to miss Sunday's game. That selection shout, and the fullback call, was discussed by Barry Murphy, Andrew Trimble and Jerry Flannery in the latest episode of Baz & Andrew's House of Rugby. 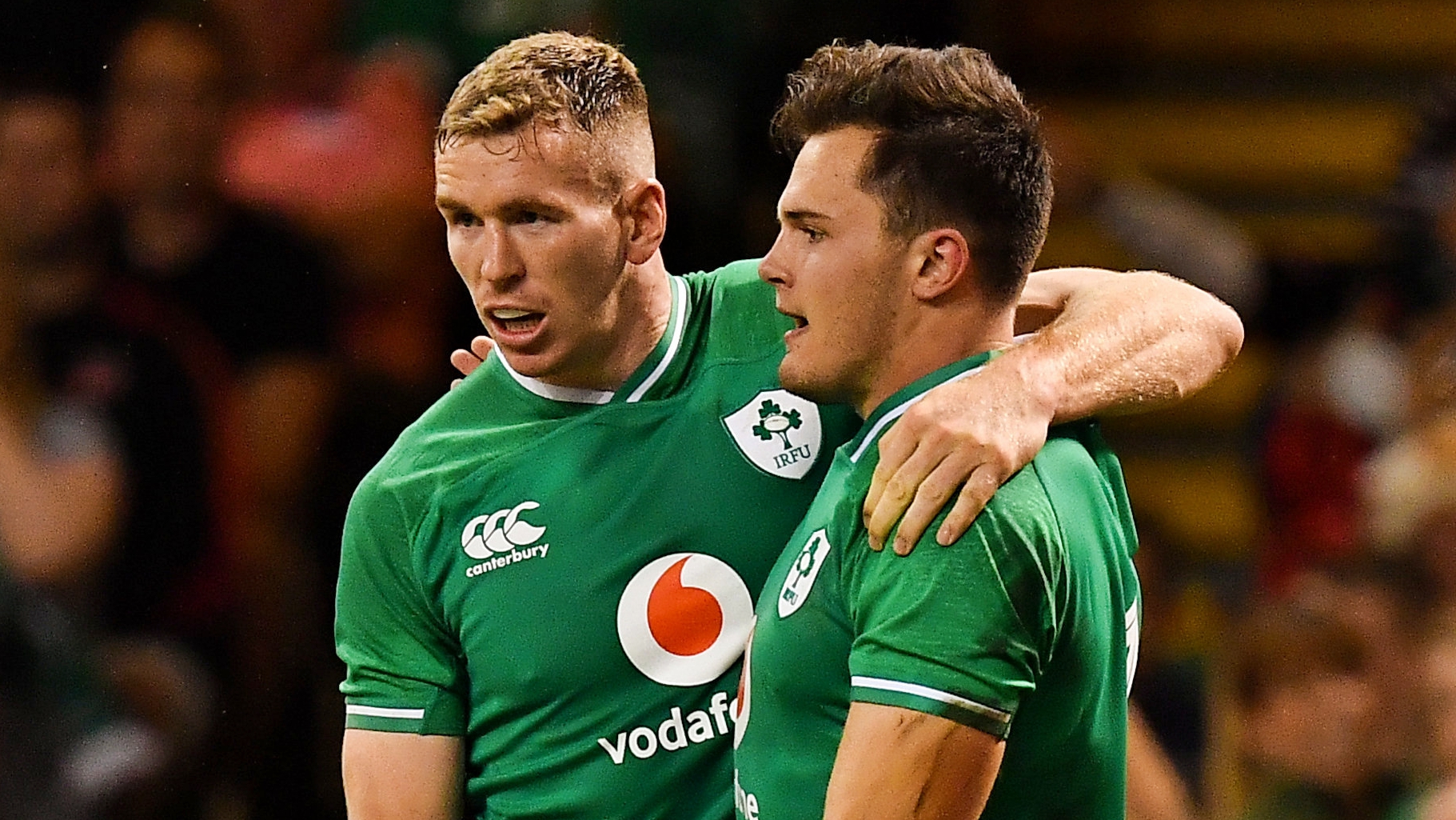 Jacob Stockdale and Chris Farrell during Ireland's win over Wales in Cardiff. (Photo by Brendan Moran/Sportsfile)

END_OF_DOCUMENT_TOKEN_TO_BE_REPLACED

The shame about Henshaw missing out is that he hit the ground running, against Wales, in his first game of the season. The Bundee Aki partnership was struck up again and looked Ireland's best bet for the World Cup.

"It's going to be important that whoever is at 13," notes Flannery. "You saw Henshaw and how high he got up on the outside and how he cut off that last pass."

Murphy believes Ireland will go with Aki and Garry Ringrose - their most used midfield combination of the past four years - but Trimble suggests Chris Farrell.

TRIMBLE: "Well, that was what people initially were saying but then, like, with the physicality you might get from Farrell, would there not be an argument there as well? But if he's getting high and you want someone to make reads the way Henshaw made, then that's probably Ringrose."

FLANNERY: "Well, I think Chris Farrell is probably capable of that as well. But I would have thought that with Henshaw out, Ringrose would be the next man up.

MURPHY: "Again, you pointed out last week that he becomes that utility player and that with Henshaw down, you would assume he'd go straight in. But that's not the case because, off the bench, he can cover everything across the backline."

Trimble feels the advance notice of Henshaw missing out could well work out in the favour of Ringrose. Had Henshaw been ruled out late in the week, Farrell may have been dropped straight in.


popular
Jurgen Klopp reacted like everyone else to Darwin Nunez headbutt red card
"I cannot believe how Nunez thinks he's going to get away with that!" - Jamie Carragher
Jamie Carragher on the two Man United players Erik ten Hag can't trust
"I went up to the Italians and gave them a big auld shoulder" - Paul O'Donovan does it again
Carragher and Neville brutally name Man United's biggest transfer flops since 2013
Wexford Under-20 lights it up as Ferns win their first ever county title
Wexford, Waterford and Kilkenny down some good men as Australia calls
You may also like
2 weeks ago
“My confidence was on the deck" - Aaron Connolly explains why he has made the move to Italy
2 weeks ago
Every Irish transfer in football, this summer, as several big deals get done
3 weeks ago
Six Irish players make damn impressive 'World XV' that would take some beating
3 weeks ago
The frontrunners for Ireland's 33-man squad for the 2023 World Cup
3 weeks ago
All Blacks media manager explains why Ian Foster appearance was cancelled after Ireland defeat
3 weeks ago
Warren Gatland selects nine Irish players in his strongest Lions XV, right now
Next Page