Even with the clock ticking down to its final seconds of regular time, and Ireland 20 points in the clear, the hosts were giving nothing away. Tim Swinson thought he had scored but one man 78 minutes into a huge shift put his body on the line.

Average is not acceptable.

That is what Andy Farrell and Joe Schmidt have been trying to drill into their players.

15 senior Ireland internationals have been either ruled out of this championship before a ball was kicked or injured along the way.

The fact that Ireland have coped without the likes of Jared Payne, Robbie Henshaw, Rhys Ruddock, Josh van der Flier and Luke McGrath is a measure of the work Schmidt has put into strengthening his squad is remarkable. Jamie Heaslip – an absolue titan at No.8 for over a decade – has retired without a single Irish stride being affected.

Sean O'Brien – one of Ireland's four undoubtedly world-class players – will miss the entire championship and yet he has not been missed.

One of the main reasons that Ireland have not been left wanting in the back row has been due solely to Dan Leavy. 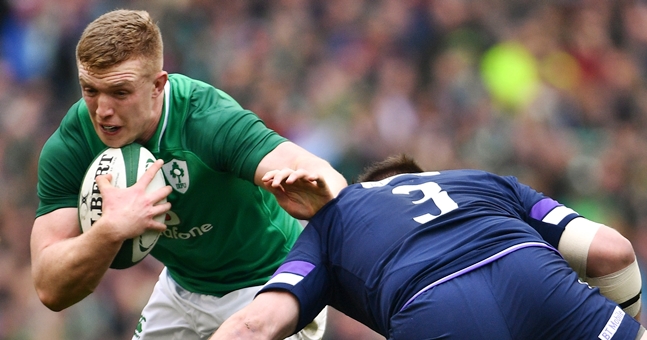 Van der Fier got 25 minutes against the French but Leavy replaced him and brought some fire with him at Stade de France. Along with James Ryan, he was the best Irish forward in the final hour.

Against Italy, he was in from the start and backing up his own confident words ahead of the match. He was ready and waiting to be the impact player Ireland needed and he was on the monry against the Italians. Nothing flashy, just a good, solid game and a heap of quick ball secured for his team.

END_OF_DOCUMENT_TOKEN_TO_BE_REPLACED

He was better again when Wales came to town. Ireland were warned they would be in for a dog-fight and Leavy was up for it. He scored a second half try and plagued the Welsh throughout.

Up against John Barclay, Hamish Watson and the ornery Ryan Wilson, Leavy was in his element. He was chatting and back-talking to the Scots from early doors; getting himself fired up and keeping it lit. There were two turnovers in the first half and he slowed down a lot of ball before Greig Laidlaw could get it away.

Peter O'Mahony grew into the match after getting out-muscled in a couple of early exchanges. He won a crucial turnover early in the second half and lasted 55 minutes before Jordi Murphy came on and rolled his already tight sleeves up. CJ Stander was down in the early teens for carries but that was because he was needed for a close-quarters fight.

The Irish back row did not win every ruck but, by God, they won an awful lot of them. At the heart of it all was a raging, roaring Leavy.

His final turnover was secured on his own tryline in the 78th minute as he careened his head and neck into the turf to prevent a consolation score for the Scots. Body on the line stuff. Swinson denied.

Scotland's players formed a guard of honour to applaud the victorious Irish players off. Leavy was the last man off the pitch. He had also been the best one on it. Surely he had.

Going into the championship, had every openside in the country been fit [a fanciful notion] and the pecking order would have looked something like this – O'Brien, Ruddock, van der Flier and Leavy possibly shading Tommy O'Donnell.

England are up next at Twickenham and Dan Leavy might as well keep that No.7 on his back. He'll be needing it again.


popular
"There's times I do think I probably have let people down but in fairness, I have got good support from back home"
Goal disallowed in Dublin SFC because player wasn't wearing his gumshield
The SportsJOE 12 o'clock quiz | Day 138
All hail Alexis Sanchez, the man who played Manchester United like a piano
The SportsJOE 12 o'clock quiz | Day 137
"I was asked to be the team doctor. I thought well I'll never play senior camogie for Galway"
"That's a risk I'd be willing to take" - Byrne ready and raring for a championship
You may also like
2 weeks ago
Ireland set for Six Nations decider in Paris on October 31
2 weeks ago
We challenge any rugby player to top Jack McGrath's lockdown hobby
3 weeks ago
James McClean opens up on sickening, Covid-related hate mail
3 weeks ago
When the President interrupted a Euro 88 pint between Charlton and Dunphy
3 weeks ago
How an uncultured Englishman conquered Ireland's sporting heart
3 weeks ago
The SportsJOE 12 o'clock quiz | Jack Charlton special (Day 112)
Next Page