Andy Farrell's side did not have it all their own way against Scotland in the Autumn Nations Cup. Our Ireland player ratings reflect the big impact made by two impressive forwards.

The first half saw Ireland go unrewarded on the scoreboard after a bright start. The Scots grew into the contest and went 6-0 up before Johnny sexton tagged a score back off the kicking tee.

Both sides traded penalties after that before Duncan Taylor was sent to the sin-bin for a deliberate knock-on. Ireland eventually made them pay when Sexton's smart kick caused the necessary chaos for Keith Earls to bag his 31st Test try. 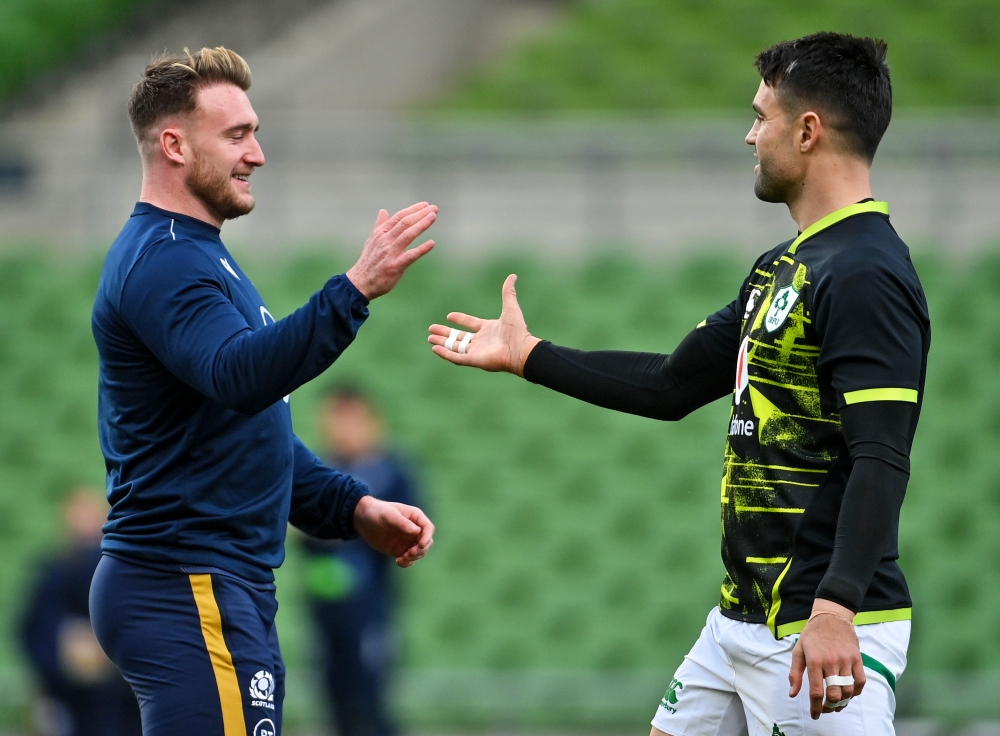 END_OF_DOCUMENT_TOKEN_TO_BE_REPLACED

Ireland have copped a lot of flak for starting second halves poorly, of late, but they ripped up that particular script today. Cian Healy bashed over from close range and Peter O'Mahony teed up Earls for his second with a lovely pass.

25-9 up, Ireland were almost home and hosed but Rob Herring switched off at the breakdown at Duhan van der Merwe darted through the gap before burning Jacob Stockdale to bag a converted try. Ireland steeled themselves, though, and Ross Byrne added two penalties to seal the victory.

END_OF_DOCUMENT_TOKEN_TO_BE_REPLACED

A mixed bag in the air - forced a Scottish knock-on, in the early exchanges, then shelled one under little pressure. Missed van der Merwe when he took advantage of Rob Herring switching off. His best contribution in attack was a lovely kick that sat up for Earls to attack, inside the Scottish 22.

His prowess in the air came up trumps on a few occasions, particularly for Earls' first half try. Some statement-making tackles made in defence.

What you see is what you get from Aki. Very little sparkle but all heart and graft.

Was on hand to dot down his 31st Test try to punish Scotland when they were down to 14 men. After waiting a while for No.31, No.32 followed in the second half as he dived over in the corner.

Sublime kick to his left was crucial for that Earls try. Off the target with his first penalty attempt. The Scots sent a lot of traffic his way and he twice received treatment in the first half.

Did enough with one covering tackle on van der Merwe after Keenan had been beaten, out wide. Box-kicking on point. Made a great take under a high ball before his side were awarded a pressure-relieving penalty.

Poor pass, under pressure, to Bundee Aki and gave away a penalty for offside when he jumped the gun. Then penalised at an 18th minute scrum for pulling down Fagerson. The second half saw business pick up as he bulled over for his team's second try.

Threw a lineout straight to the Scots inside his own 22 and was blessed that the Irish defence held out. Will be glad there will be no video review on Monday morning as he switched off and had a shocker for that van der Merwe try. Conceded a penalty not long after that.

Hasn't had it all his own way, but has really stepped up for Ireland since Tadhg Furlong picked up his injury. A head-wrecker for the Scots, in the loose. Solid at the scrum. Won his side a crucial penalty with 20 minutes to go.

His best contribution to the cause came in defence as he connected with 15 tackles in another 80+ minute outing.

Showed soft hands to put Doris through a gap. Made one decent rip in a tackle but a penalty had already been awarded against his side. Stuck seven tackles. Left the fray early after picking up a knock.

Strangely subdued Autumn Nations Cup for the usually excellent Stander. Made little ground on his carries and fell off a few tackles.

Livid with himself when his grubber kick for Earls went out of play, early on. Buried Ali Price on one carry, over on the right wing.

Let Hogg know he was there too. Necessary physicality, as per usual, from the Munster man. That was seen with his latch and drive on Healy for his try. Then assisted Earls with a peach of a pass. Ireland missed him when he went off for his HIA, which he passed. Did concede a late breakdown penalty. Was then denied what would have been a great try by having a foot in touch.

A few strong carries in the opening stages but blotted his copy-book by conceding a breakdown penalty. Was almost through for a try after a nice line break but was ankle-tapped. Made ground with countless carries as he busted through tackles.

Made a real impact after coming on, and great lineout jumping too.

Came on for O'Mahony when he was having his HIA.


popular
“Players flourished when Roy Keane left” - Rio Ferdinand on why Keane was a 'detriment' to Man United
"To be able to call myself the fastest man in Irish history is just amazing" - Olatunde overjoyed after record-breaking run
Specsavers troll former Liverpool star for Darwin Nunez headbutt claim
"I went up to the Italians and gave them a big auld shoulder" - Paul O'Donovan does it again
Wexford, Waterford and Kilkenny down some good men as Australia calls
The moment Israel Olatunde realised he qualified for the Euro 100m final is what it's all about
Jamie Carragher on the three Man United players Erik ten Hag can't trust
You may also like
2 weeks ago
“My confidence was on the deck" - Aaron Connolly explains why he has made the move to Italy
2 weeks ago
Every Irish transfer in football, this summer, as several big deals get done
3 weeks ago
Six Irish players make damn impressive 'World XV' that would take some beating
3 weeks ago
The frontrunners for Ireland's 33-man squad for the 2023 World Cup
4 weeks ago
All Blacks media manager explains why Ian Foster appearance was cancelled after Ireland defeat
4 weeks ago
Warren Gatland selects nine Irish players in his strongest Lions XV, right now
Next Page