Ireland's team to play Australia may change before Saturday

Ireland named their matchday 23 to take on Australia this afternoon but don't count on it just yet.

There were tense scenes at Carton House today as Ireland's team announcement was pushed back. Reporters on the ground usually get an embargoed team under an hour before it is officially announced.

Today, it arrived at 1:56pm and Joe Schmidt was reading it aloud for us five minutes later. Talk of Stuart Olding and Simon Zebo missing out on the starting XV proved correct but worries over Rob Kearney proved unfounded... for now.

END_OF_DOCUMENT_TOKEN_TO_BE_REPLACED

Injuries to several senior players had many of the Irish squad, in the words of Conor Murray, putting their feet up early in the week. It was all about rest and recovery, with emphasis on a few set-plays and drills.

Ireland retained as many players as they could for the training sessions in Kildare but, pressed by the provinces, released a good number for the traditional Wednesday down day. Many of them, including Billy Holland and Jack O'Donoghue, were back in Ireland camp today. Fit bodies are needed to fill the line.

Three of Ireland's squad are far from certain to be involved on Saturday. Two [Rob Kearney and CJ Stander] are still following the Graduated Return To Play protocols and Simon Zebo is nursing a serious case of cramp.

As it stands, three Irish players not selected in the matchday squad are on yellow alert should Stander, Zebo or Kearney suffer adverse effects from Friday's Captains Run. 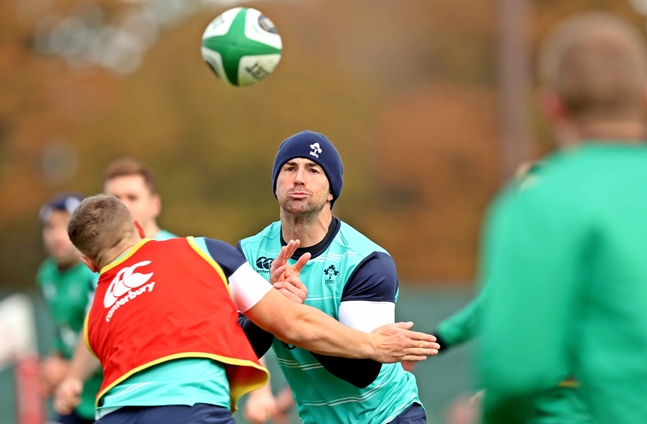 Donnacha Ryan, Craig Gilroy and Tiernan O'Halloran will all have their phones switched on and fully charged tomorrow, just in case there is an injury update from the Aviva Stadium run. Luke McGrath has been named on the Leinster bench for their away game with Dragons so Schmidt and his coaching staff must have faith in Conor Murray's fitness [he carried an injury into the Chicago game]. Schmidt said:

"Rob trained for the first time today. We just trained him away quietly because that's how you progress them back. He's still got another 48 hours to really build himself into this weekend's match. Same with CJ Stander."

END_OF_DOCUMENT_TOKEN_TO_BE_REPLACED

Gilroy is named on the Ulster bench for their home game against Zebre but could handily nip back down the road to Dublin if he is required to face the Wallabies.

Under the Graduated RTP protocols, both Stander and Kearney were able to take some contact in training today but they must wait a further 24 hours to see how they react to the session.

Four Tests in four weeks was always going to be tough, even if some lads got a weekend off against Canada.