Ireland secured their first win of their 2022 TikTok Six Nations campaign after a five-try performance against Italy at Musgrave Park.

Italy hit the front with an early penalty that was some reward for their attacking endeavours. Ireland got their act together soon after, though, and crafted an opening for fullback Lucy Mulhall to score in the corner.

END_OF_DOCUMENT_TOKEN_TO_BE_REPLACED

After 30 minutes, Ireland were denied an Amee-Leigh Murphy Crowe try after the referee ignored the urgings of her Television Match Official and stuck with her original 'no try' decision. It was a harsh call on Ireland but they rallied to grab a second try - Neve Jones scoring off a powerful rolling maul - before half-time.

Five minutes into the second half and still with a player advantage, after an Italy yellow card, Ireland got their third try in slightly fortuitous circumstances. Kathryn Dane looked to be attempting a box-kick to test the Italian defence but centre Eve Higgins was alive to it, caught the ball and it dropped and scampered over for a fine score that was converted by Nicole Cronin.

Big turnover from Hannah O'Connor, Kathryn Dane kicks through and Higgins plucks it out of the air to scores from 40 metres out.#IREvITA #TikTokW6N pic.twitter.com/8zRxbJ27qr

END_OF_DOCUMENT_TOKEN_TO_BE_REPLACED

Ireland, who would still have ambitions of a top three finish, got their try-scoring bonus point when their forward pack forced the Italians to crumple a few times in a short period. That made it 24-3, but the visitors would get over for a consolation before the final whistle.

Italy Melissa Bettoni crashed over for a try, on 72 minutes, after a strong maul had Ireland scrambling.

The final score of the game went to Ireland, though, as Katie O'Dwyer showed great awareness to pouch a bouncing ball after their lineout looked like it had been stolen. For Greg McWilliams, he will be pleased with the win, as well as the performances of Jones, Higgins and stand-outs Stacey Flood and Sam Monaghan.

Our Player of the Match: Stacey Flood (Ireland) 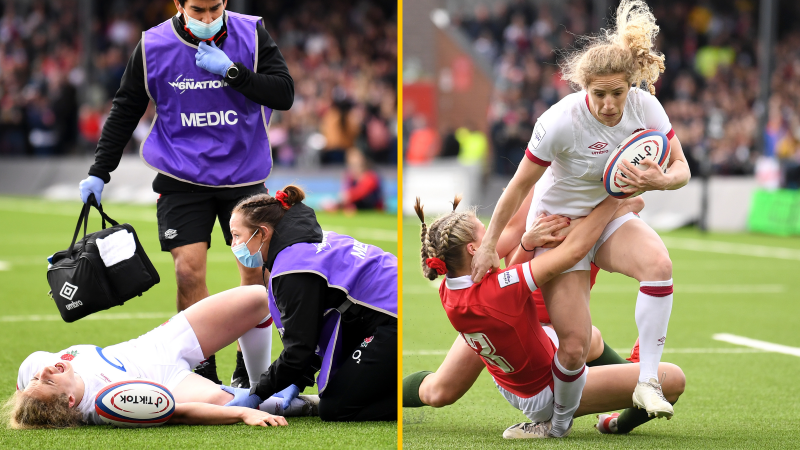 Elsewhere in the competition, reigning champions England ran in 10 tries in a 58-5 win over the previously unbeaten Wales.

Wales held the game at 0-0 for 15 minutes but Lark Davies breached their defence to get the ball rolling. She helped herself to a second, late in the game, and Jess Breach got a couple, too.

The shine was taken after the England win when Abby Dow unfortunately broke her leg in the process of making a carry. The RFU today confirmed:

'Abby Dow suffered a broken leg in England’s TikTok Women’s Six Nations match against Wales yesterday. She is comfortable in hospital and will undergo surgery.

'Everyone at England Rugby sends their best wishes to Abby and wishes her a full and speedy recovery.

'On behalf of Abby, we’d like to thank England supporters and the wider rugby family for the messages of support we have received following Saturday’s match.'

France won their third game in a row, scoring four tries in the process, but Scotland kept them scoreless in the second half and responded with a Chloe Rollie try in a 28-8 defeat.