Those were the words of Ireland head coach Adam Griggs as the restart beckons.

Italy are in town on Saturday and the Irish have named a strong and settled side as they play their penultimate game of the Six Nations in Donnybrook (kick-off 6.30pm).

After beating Scotland and Wales, the free-wheeling England put Griggs' team to the sword but, with two games remaining against Italy and France, there's an opportunity to finish strong.

Eimear Considine takes her spot at full back whilst Claire Molloy is picked for what will be her 70th cap.

Dorothy Walls will make her first start for the country in the back row after coming on as a sub with pure distinction in the three previous Six Nations outings.

All the players have come through their coronavirus tests okay and Griggs is keen for them to know what a privileged position they're in, just getting to play.

"No one across Irish Rugby in the women's game is actually able to pull on a jersey and play right now and yet here we are already privileged to represent our country and be one of the only teams actually playing in these times," the head coach said.

"It's not lost on us and we want to make sure that we perform really well and give everyone watching something to cheer about come the final whistle." 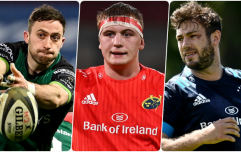 END_OF_DOCUMENT_TOKEN_TO_BE_REPLACED

* Denotes uncapped player at this level

You may also like
5 days ago
Andy Farrell makes bold outhalf calls after Johnny Sexton excused from duty
5 days ago
11 uncapped players named in Ireland squad for summer Tests
2 weeks ago
"Very few players that we set out to keep were lost" - IRFU's David Nucifora
2 weeks ago
"CJ was really appreciative of the offer he was given" - IRFU content they did all they could to keep Stander
1 month ago
Ireland confirm summer Tests, in Dublin, against USA and Japan
1 month ago
Eve Higgins: "If it wasn't for dad and mum knowing how much I loved this sport, who knows if I'd have kept playing"
Next Page