Ireland hit with dreadful injury news ahead of Six Nations

There has been an injury update from Connacht and, as has so often been the case this season, it is not good.

2016 was such an impressive year for Ultan Dillane.

He stepped up from smashing his way onto the scene with Connacht to make his Ireland debut against England, at Twickenham, and look like he was born for the good stuff.

END_OF_DOCUMENT_TOKEN_TO_BE_REPLACED

He carried on with huge, charging impacts against Italy and Scotland before helping Ireland to wins over South Africa, New Zealand and Australia. He got his only start of his eight Test appearances and claimed the man-of-the-match accolade in a 52-21 win over Canada.

Dillane looked primed for an even better 2017 and there have even been murmurings of him making the Lions Tour to New Zealand off the back of a strong Six Nations.

All that may have to wait, however, as the lock has damaged ankle ligaments. Pat Lam told reporters at The Sportsground, this afternoon, that Dillane will see a specialist about is injured ankle. 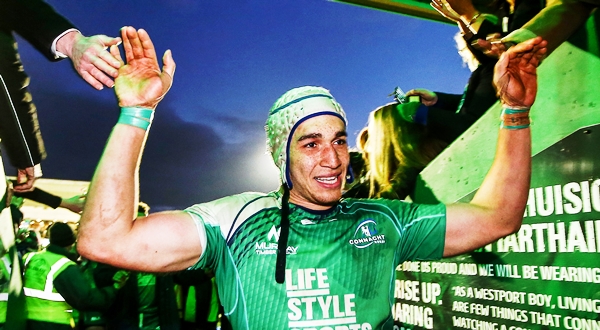 END_OF_DOCUMENT_TOKEN_TO_BE_REPLACED

The initial estimate is that Dillane will be out for five or six weeks but undergoing surgery may push that back another week. It looks highly unlikely, then, that the 23-year-old will feature in Ireland's Six Nations openers against Scotland and Italy next month.

Connacht are also likely to be without Nepia Fox-Matamua, John Muldoon and Jack Carty for this weekend's Guinness PRO12 game against Ospreys.

When it rains out west, it very often pours.


popular
Andy Farrell goes for Munster veterans as Ireland team to face New Zealand named
The four stone-cold certainties for All-Stars even as early as this
"He's actually smiling putting the ball over the bar. He should nearly be fainting." - Ryall on Limerick's legacy
Eamon McGee just couldn't help himself with Armagh-melee tweet
Kylian Mbappe reportedly wants PSG to sell Neymar
Gavin Coombes one of four Irish players to push themselves into Test picture
"The economy was one of the big reasons" - Cadogan's move from an electrician to personal training
You may also like
19 hours ago
Gavin Coombes one of four Irish players to push themselves into Test picture
21 hours ago
Bundee Aki understandably emotional, as Ireland pay moving tribute to late Sean Wainui
22 hours ago
Full Ireland player ratings after Maori All Blacks teach us an early lesson
1 day ago
"We could lose all five games" - Darren Cave with a rare take on Ireland's chances
1 day ago
Mike Lowry and Peter O'Mahony in First Test contention as Ireland shuffle deck
2 days ago
"Significant" knee injury ends Iain Henderson's tour of New Zealand
Next Page