The latest list of highest-paid players in world rugby has been compiled and there are no Irish players in the Top 10. There are two England internationals while Finn Russell is being handsomely remunerated in Paris.

In terms of value for money, Montpellier never quite got there with Handré Pollard. The Springboks outhalf signed with the Top 14 side in 2019 and pitched up in France as a World Cup winner.

END_OF_DOCUMENT_TOKEN_TO_BE_REPLACED

The £1m per season deal was pricey, but Montpellier were aiming for the stars. Pollard linked up with fellow South Africans Cobus Reinach and Jan Serfontein in a squad that contained backline talents Vincent Rattez and Geoffrey Doumayrou, with French internationals Guilhelm Guirado and Paul Willemse in the pack.

Pollard played 16 times for the French side in his first season there. Last season, they finished a poor 10th in the league standings [the 2019/20 domestic season was scratched due to the Covid 19 pandemic] but reached the Challenge Cup final and beat Leicester Tigers to finish the season with some silverware.

Pollard then set off home and helped the Boks to a Test Series win over the British & Irish Lions before setting off to Australia to finish out The Rugby Championship. With the November internationals coming up, the 27-year-old may not line out again for Montpellier until December. The club are not expected to renew his deal.

Pollard and Bristol star Charles Piutau both top a list of the 10 highest paid players in world rugby, which has been extensively reported by The Telegraph and Wales Online:

Along with Pollard, there are another couple of South Africans in the Top 10, and both of them are at Toulon. Seeking to get back to their glory days [2012 to 2015 was a trophy-laden peak], they have shelled out £1.75m in basic salary to Eben Etzebeth and Cheslin Kolbe.

END_OF_DOCUMENT_TOKEN_TO_BE_REPLACED

Scotland and Lions outhalf Finn Russell is the highest paid European player from the reported Top 10. Racing 92 are said to be paying him £850,000 to drive on their title ambitions in Paris.

Maro Itoje and Owen Farrell are the top English players, with Saracens managing to keep them on the books despite their season in the Championship.

As for Irish players, the likes of Johnny Sexton, Tadhg Furlong and Conor Murray would be at the top, but wages here have levelled off having climbed rapidly from 2005 to 2015.

During a fascinating discussion about player contracts with us, four years ago [LISTEN from 21:00 below], Ronan O'Gara laid out some home truths about rugby's rich-lists and about what players are realistically earning. 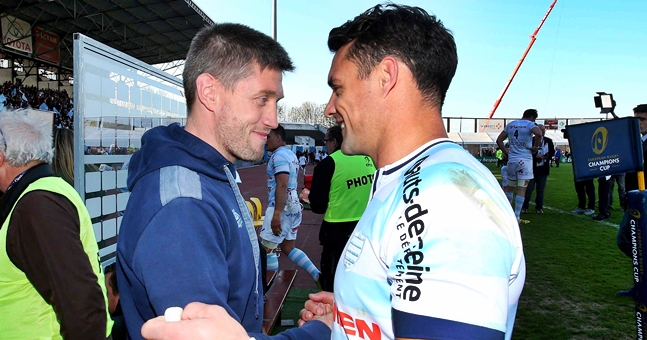 Midi Olympique had reported that Dan Carter was on €1.5m a season, almost double what the next highest earners - Matt Giteau and Duane Vermeulen - were on, at Toulon.

"You're making the crucial error there," O'Gara began, "of believing Midi Olympique. I don't think you should believe what you read in the papers. I really don't. For example, Dan is on a great salary but how much of that is earned off the pitch [with sponsors and corporate commitments]?

"You have to talk accurately, to be fair. I'd say the Giteau [salary] is inaccurate. I'd have a fair idea of what players are earning, you know... This is rugby players, we're talking about. The maximum salaries here [in Ireland] are €400,000."

O'Gara made the comments when he coaching in France at Racing 92. He has since went to New Zealand and helped Crusaders to a couple of Super Rugby titles before returning to become head coach with La Rochelle.

In those four years, the salary landscape in Ireland has not changed that much. We are seeing provinces get some outside investment in order to get big-name players in [such as RG Snyman, Damian de Allende and Duane Vermeulen] and other big players getting top-ups through corporate deals, but the basic salaries will be between €200k to €400k for our leading internationals.

Many of the top players took pay-cuts during the pandemic and opted for one-year deals with the IRFU when negotiating renewals, hoping the financial picture will be clearer as we reach the next round of negotiations at the tail-end of this year and, in some cases, before the 2022 Six Nations.