The fallout from Saturday's bone-crunching clash with the All Blacks is beginning to take shape.

Ireland will enter their final game of the Autumn series against Australia without two of their most influential players.

Jonathan Sexton and Robbie Henshaw have both been ruled out of this weekend's clash after the Leinster duo both left the pitch in the first half of Ireland's 21-9 loss against New Zealand on Saturday. 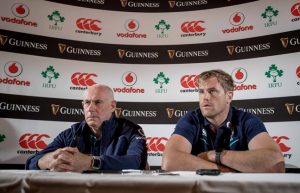 END_OF_DOCUMENT_TOKEN_TO_BE_REPLACED

Jamie Heaslip and team manager Mick Kearney met with the media today and revealed the news that both players will miss this Saturday's clash with Michael Cheika's Wallabies.

Sexton limped off in the 18th minute with a hamstring injury. This injury, however, was not related to the one he had been nursing for the last couple of weeks, it was in fact his other leg which was injured. Kearney told reporters:

"Johnny Sexton has suffered a minor hamstring injury and has been ruled out of the game at the weekend."

Unsurprisingly, Robbie Henshaw has also been ruled out after the Athlone man received a gruesome hit from Sam Cane.

This was not a clash of heads https://t.co/ZWWA2vJT3x

"Robbie Henshaw was knocked unconscious by a shoulder contact to his jaw," Kearney said. "He suffered a concussion and will not be involved this week."

The team manager also revealed that the citing commissioner investigated a staggering 11 incidents from the All Blacks with regards to potential dangerous play.  When questioned on these citings, Kearney commented:

"It doesn't surprise me, to be honest. What I would say is the citing officer picked out 12 incidents during the game. 11 of them referred to New Zealand.

"The one that referred to us was a clean-out of Sam Cane at a ruck and we were cleared of any foul play in that incident."

Meanwhile, CJ Stander, who left the field with concussion, and Rob Kearney, who developed concussive symptoms after the game, will follow their respective return-to-play protocols this week and are both doubts for this weekend's clash.

"Rob Kearney developed concussive symptoms after the game and following assessment he will follow the graduated return to play," Kearney explained.

"CJ Stander was removed for a suspected concussion and will complete the HIA [head injury assessment] process and the return to play protocols."

Meanwhile, Simon Zebo (cramp) and Tadhg Furlong (dead leg) will be closely monitored this week but are expected to be available for selection.

So that is six players who are either ruled out or are a doubt for Ireland's final Autumn International on Saturday. Lets hope, for the players sake at least, that the outcome of Saturday's game won't be as damaging.


popular
Ireland team to play Wales: Andy Farrell's XV, the big calls and bold cuts
Roy Keane reminds everyone of his feelings towards Newcastle United ahead of cup final against Man United
Ireland's self destructive mentality kills Croke Park fight for Katie Taylor
Even Roy Keane felt Michael Dawson went too far with his remark to Tom Heaton
Everton release brutal 59-word statement to confirm Anthony Gordon departure
True beauty of Fitzgibbon and Sigerson Cups lies in the hearts of weaker counties
"Every team did it!" - Paul O'Connell on Roy Keane comment to Ronan O'Gara that he couldn't deny
You may also like
13 hours ago
Ireland's self destructive mentality kills Croke Park fight for Katie Taylor
2 days ago
"I've heard people tipping Wales to beat us. I was actually offended!" - Greg O'Shea
2 days ago
"It's crazy to think Bundee Aki might come straight in and start against Wales"
4 days ago
Two Ireland stars included in Premier League's 'young English XI'
4 days ago
British publication urges Gareth Southgate to claim Evan Ferguson for England
1 week ago
The two toughest calls in Ireland team to face Wales are in the backline
Next Page