"It's probably too simplistic to say that."

Back in 2012, Stuart Lancaster was head coach of England when they scrummaged Ireland to a pulp, on St Patrick's Day for good measure, at Twickenham.

Mike Ross was injured early on, during that hideous defeat, and battled on gamely for 30 minutes before being replaced by Tom Court. The Ulster prop was on the bench covering both loose- and tight-head and he walked straight into more carnage.

END_OF_DOCUMENT_TOKEN_TO_BE_REPLACED

Ireland lost four scrums off their own feed and leaked penalties all day from that set-piece. At times it looked as though English players were deliberately knocking on, just so they could take another bite out of the beleaguered Irish scrum.

An Irish side had not endured such a roasting at the scrum until Saracens went to work against Leinster, two weeks ago, in the Champions Cup quarter final. From the second scrum of the game, Leinster were in trouble and French referee Pascal Gaüzere pinged them all day. 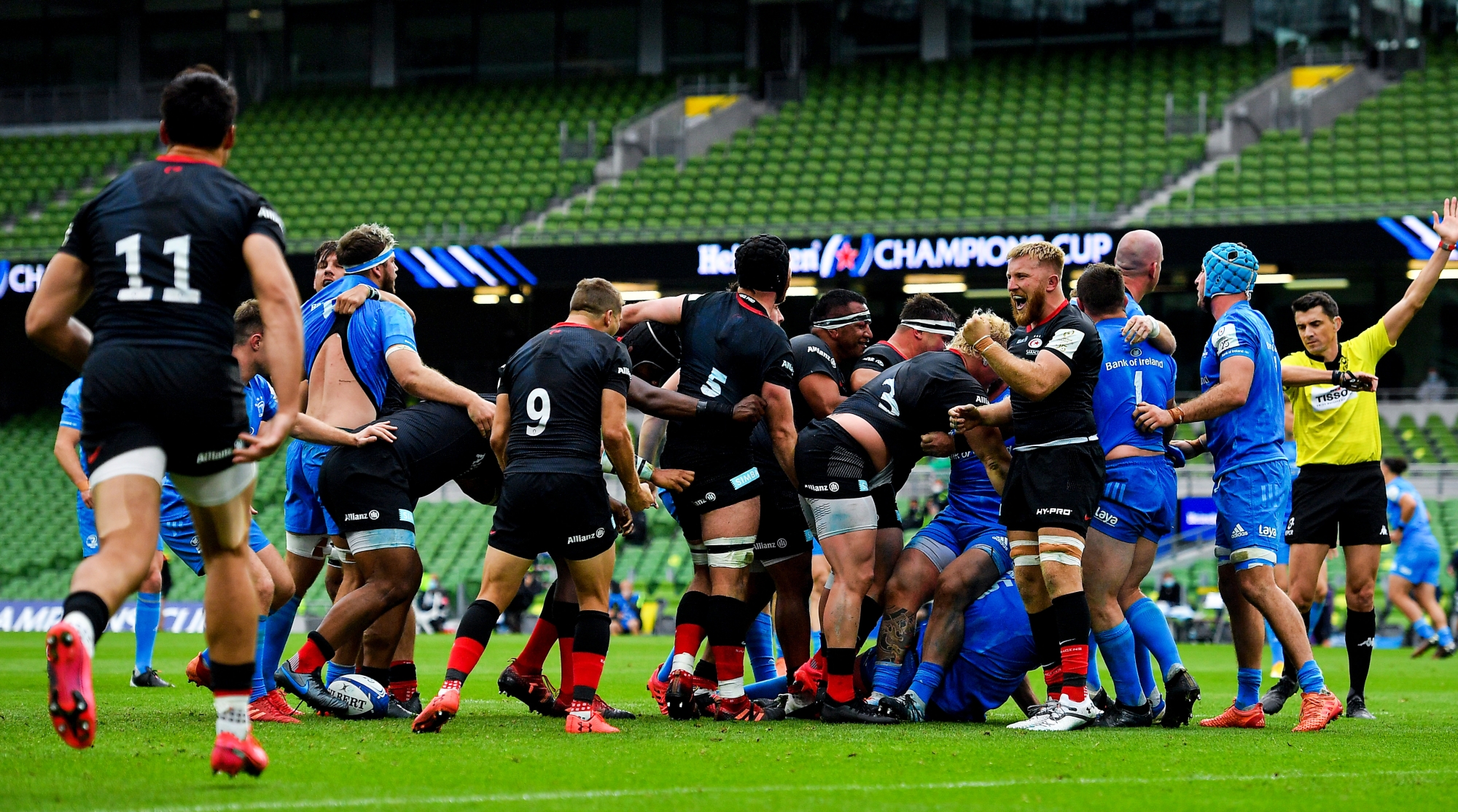 Jackson Wray of Saracens celebrates after his side won a scrum penalty during the Heineken Champions Cup Quarter-Final match against Leinster at the Aviva Stadium in Dublin. (Photo by Brendan Moran/Sportsfile)

The most galling three-pointer came on 28 minutes when Johnny Sexton kicked his restart out on the full. Sarries restarted with a scrum on the halfway line, won another penalty and Elliot Daly lamped it over from 50 metres out to make it 15-3.

"They were probably lucky not to get a yellow card," said Saracens director of rugby Mark McCall after his side's 25-17 win. "It was certainly a big factor in the match. It was an incredible performance by our whole pack. In the first half we put them under the kind of pressure that we hoped we could put them under."

It was not just at the scrum where Saracens caused Leinster trouble. Michael Rhodes, Jackson Wray and Maro Itoje all had fine games and Leinster were harried relentlessly in first half. Those watching would have seen the likes of Sexton, Luke McGrath, James Lowe and Robbie Henshaw all making mistakes under pressure.

"I wouldn't want to take too much credit for finding weaknesses in the Leinster team, there's not too many glaring weaknesses to be honest," said McCall.

"What we did talk about was trying to put them into some positions that they're not normally accustomed to being in. Trying to harass them in the back-field as much as we could, force them to do things they ordinarily wouldn't want to do 20 or 30 metres from their own goal-line.

"We just managed to put them under enough pressure for that first 40 minutes in particular, to make them make mistakes and give us some penalties... The players went out there and they did it, they were so engaged and had so much energy that they were able to harass them and put them under some pressure."

END_OF_DOCUMENT_TOKEN_TO_BE_REPLACED

The dread returning to Irish rugby fans - as Leinster make up a significant chunk of the Test squad - is that our players are under the thumb of England's top players.

Leinster have now lost twice to Saracens, who also picked off Munster on their way to European glory in 2019, and Ireland have been soundly beaten by Eddie Jones' men in their last three meetings [an aggregate score of 113-47 with Ireland getting late consolation tries in two of those games]. 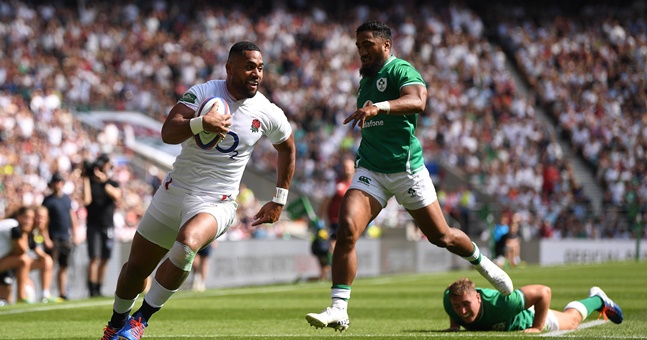 Joe Cokanasiga breaks past Jordan Larmour of Ireland to score for England in August 2019. (Photo by David Ramos/Getty Images)

END_OF_DOCUMENT_TOKEN_TO_BE_REPLACED

Asked if it was a big concern that Irish players were struggling to cope with the power game English stars are capable of bringing, Lancaster, who is now Leinster's senior coach, said:

"It's probably too simplistic to say that, personally. It wasn't that long ago that Ireland were winning Grand Slams and we won the European Cup, two years ago.

"The reality is, yes, we've lost against Saracens twice now and Ireland have lost against England twice [competitively]. I think the [2019] Champions Cup final in Newcastle was nip and tuck. I really think that. We were 10-3 up going into half-time and they got that try, just on half-time. We definitely had opportunities at the start of the second half and it was only when we lost Scott Fardy to the sin-bin that they got the momentum in the game...

"This [last] Leinster game was different. In the four years I've been at Leinster, I've not seen us concede as many scrum penalties in any game. I don't worry about things like that because I know we can fix those things up technically. Perhaps one or two things didn't go our way that we felt should have done but that's rugby.

"Going on to the Ireland games and the England games coming around the corner, Ireland have got more than enough in their armoury to challenge England. It was probably more the kicking game in the last Ireland, England game that resulted in England getting that win.

"But the reality is, whether you're playing Saracens or England or the big teams in Europe, you have to do the fundamentals really well and, on the day, we didn't do that well enough."

Ireland are not due to face England until November 21, at Twickenham, during the Autumn Nations tournament. The rugby landscape will have shifted again and a new Six Nations champion will have been crowned, but the Irish players should expect to see some familiar faces.

Mako Vunipola, Jamie George, Maro Itoje, Billy Vunipola, Owen Farrell and Elliot Daly will all be waiting, and confident they have Ireland's number.

Not incidentally, Pascal Gaüzere is reffing that England match in November.


popular
Quiz: Which footballer has played more times for Ireland?
"It’s hard not to respect Johnny, even if you don’t like him!" - Dan Biggar
Martin McHugh: Them lads were stronger than the modern day player who's lifting weights all the time and doing no manual work
"I was in the Blackrock end goal looking up to the heavens saying, "Get us through it" - Kerins following his late father's footsteps
Dessie Farrell set to cut large chunk of Dublin players as panel is reduced for league campaign
Sky Sports presenter explains why Roy Keane and Graeme Souness are so critical of players
Eddie Jones shares great tale on hour-long chat with 'inspirational' Roy Keane
You may also like
2 days ago
"I have to come into this camp and do what I can to get the No.2 jersey" - Rob Herring
2 days ago
"It's not a stepping stone any more" - Connacht pride in Test-ready stars
3 days ago
"I had a point to prove" - Conor Oliver on choosing Connacht over Leicester Tigers
6 days ago
"I saw a skinny boy from Ireland, standing in a big goal" - Jurgen Klopp praises Caoimhín Kelleher's development as a goalkeeper
1 week ago
Predicting Ireland's starting XV for Wales after Andy Farrell squad announcement
1 week ago
Jamie Heaslip delivers Jack Carty reality check, hours before Ireland call-up
Next Page