Back in March 2018, and an absolute freezing Twickenham, Ireland all but clinched their third ever Grand Slam by steaming 14-0 up on England in their final game of the championship.

Ireland were already leading through a converted Garry Ringrose try when an intricate backline move off an attacking lineout put Bundee Aki through a gap in the English defence.

Aki made the break and as CJ Stander had vowed to his teammate, he found Ireland's No.8 there on his inside shoulder. Ben Youngs, Anthony Watson and James Haskell were still on hand, and trying to stop Stander, but he smartly touched the ball off the base of one of England's uprights.

It was a Joe Schmidt attacking set-play to a beautiful tee as it used a strong set-piece, forwards in the backline, a sharp attacking line and it targeted a weakness in the English defence. Everything worked so smoothly and England were carved up on the way to an Irish Grand Slam.

The only other Ireland score to rival it from Schmidt's era must be when they went Harlem Globetrotters against Italy in 2016, with Jamie Heaslip getting the World Rugby accolade later that year. The Kiwi would have enjoyed this one more, especially given the magnitude of the match.

However, that Ireland try would not be allowed to stand anymore, or it least a score like it would not stand once rugby returns to action.

World Rugby has announced it will no longer be possible to score a try by grounding the ball off the base of the post protector. The amendment to Law 8 was approved by the WR council following a recommendation by the international federation's Rugby Committee and specialist Laws Review Group.

The amended law will now read - The post protector is no longer an extension of the goal-line. Therefore Law 8.2 (a) will read: A try is scored when the attacking player a) is first to ground the ball in the opponents' in-goal.

END_OF_DOCUMENT_TOKEN_TO_BE_REPLACED

Re-elected World Rugby chairman Bill Beaumont says the law has been changed to help 'make the game as simple, safe and enjoyable to play as possible'.

Tries like that CJ Stander score against England in 2018 are now a thing of the past. So, if you will indulge us, let us hark back to that game-breaker against Eddie Jones' men on St Patrick's Day.

"They [the Irish management] will understand, based on the data they collect from games, what the intensity is going to be like and they'll try to replicate that.

"And the second thing is, Joe will put incredible pressure on them. He creates a pressure cooker in training so they get used to it in matches.

"For instance, that Tadhg Furlong play that resulted in the CJ Stander try, they would have had one opportunity to run that, on the Thursday, in training. If they mess it up, they don't get another opportunity." 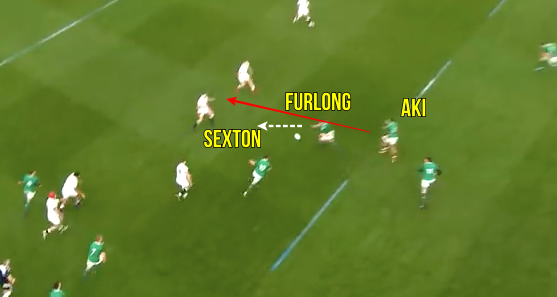 "His philosophy," McLaughlin continued, "would be - 'You do your work, you do what you need to prepare mentality, you can run through it in the gym before training, but you get one chance'. That's the pressure that he puts them under in training.

"Because England are not going to say, 'Oh, you messed up. Go back and do the lineout again. Try get it right next time'. That creates huge pressure."

Decision-making and being clinical under pressure.

"That's Joe Schmidt down to a tee," McLaughlin added. "I've never seen anyone else analyse a team in greater detail than him."

popular
Conor McGregor bought out of Proper 12 whiskey company
Khabib Nurmagomedov's reaction to Islam Makhachev's brutal knockout really said it all
Conor McGregor jumped from behind as he recovers from loss
Khabib Nurmagomedov confirms next fight, with Abu Dhabi likely to host September event
QUIZ: How well do you remember the 2010 World Cup?
Sean O'Brien's parting gesture won't soon be forgotten by Scott Penny
Here's a list of 23 people who own a greater share of the UFC than Conor McGregor
You may also like
4 days ago
"There would be a boot in the sink, a dish there, a toothbrush under the bed!"
4 days ago
Ugo Monye's Lions XV features two Ireland players and Welsh captain
4 days ago
Strong Ireland team Andy Farrell should pick to turn over Scotland
5 days ago
Welsh star backs Ringrose and Henshaw for Lions backline
5 days ago
Full text of Craig Casey's interview after lively Ireland debut, and initiation song
5 days ago
Ireland release Craig Casey, Bundee Aki and 11 more back to provinces
Next Page