Former Ireland fly-half Ian Madigan has said that he grew envious of Johnny Sexton while he was with Leinster and Ireland.

Madigan was often the Ireland playmaker's understudy at both provincial and international level before he eventually left Irish Rugby in 2016 for Bordeaux in the south of France.

The 29-year-old is currently with Premiership bound Bristol but he said that wanting to be the player that called the shots was a big factor in his desire to leave Leinster.

END_OF_DOCUMENT_TOKEN_TO_BE_REPLACED

“I was probably envious of what Johnny had with Ireland and Leinster,” Madigan told The Telegraph.

“I wanted to be that guy myself, to have that connection with the coaches, to be able to call the shots on the pitch, and that was a big reason why I left Leinster.” 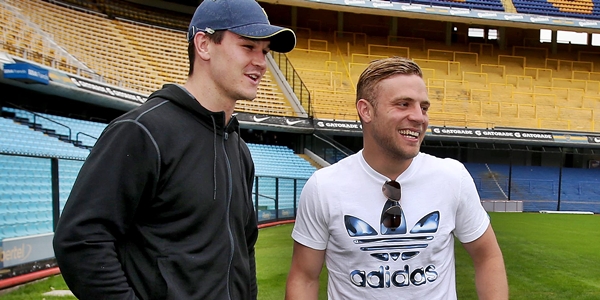 Madigan also said that moving to a new club has helped him shake the mercurial tag that followed him throughout his career in Ireland.

END_OF_DOCUMENT_TOKEN_TO_BE_REPLACED

The Dubliner spent seven seasons with the Leinster first team but said that moving to two new clubs provided him with an opportunity to redefine his perception as a player.

"While you might iron those parts out of your game as your career moves on, you can still be tagged with them if you have been at a club for six, seven, eight years.

"I do think going to a different club allows you to get a fresh start, I feel you can prove them in a new environment. Maybe I am not as much of a maverick as I used to be, maybe I am more of a consistent fly-half as I have gotten older. It is something I have been allowed to do.”

"He has been outstanding," said Lam.

"And added to how well he has played, he is one of the best place-kickers in world rugby.

"When I first arrived in Ireland, he was playing 12 then took over at 10 whenever Johnny Sexton was injured. I thought, 'Jeez, this kid is good.'

"We all know then what happened when Johnny left and Jimmy Gopperth came in. It seemed to me as if he was playing a certain way for one coach and not as successful for another.

"So when I was looking to sign him, I spoke to Joe Schmidt. Because the number one thing is the relationship between a player and a coach.

"Joe kept him accountable when he was there with him at Leinster and Ireland but they had a strong relationship.

"When I met him, I wanted to know what his goals were. He harbours an ambition to still play for Ireland.

"But before that, the number one thing for him was to really have an influence in a team and play the best rugby he can.

"That's what I wanted to hear and that was my role to help him. We have been really honest with each other.

"We're not getting carried away. He knows what he has done well and what he can do better. But he is a competitor and wants to be challenged, he wants feedback and guidances.

"He has embraced it all. I'm really excited to see what he can do at the next level."


popular
Roy Keane's issue with Argentina star could rival Graeme Souness and Paul Pogba
'I was so stressed the week before the All-Ireland and I ended up having a panic-attack' - O'Shea and O'Sullivan open up
Roy Keane cracked up Ian Wright and Gary Neville with England team spirit remark
Roy Keane takes moment on TV to pay tribute to his old team in Cork
The nine England World Cup footballers who could have played for Ireland
Lionel Messi makes Gary Neville eat his words after "silk pyjamas" comment
Roy Keane shoots down ITV presenter's 'excuse' for England's draw with USA
You may also like
1 day ago
Former England international admits he wishes he had played for Ireland
6 days ago
Two baffling omissions as four Ireland stars make World Rugby 'Dream Team' of the Year
6 days ago
Josh van der Flier claims World Rugby Player of the Year at Monaco ceremony
6 days ago
"Highlight of my Ireland career" - Behind the scenes as Jack Crowley and Ross Byrne covered for a legend
1 week ago
Bundee Aki reminded us all of his best qualities, on a night Ireland couldn't do without him
1 week ago
Peter O'Mahony delivered some fitting Jack Crowley comments after surprise Test start
Next Page